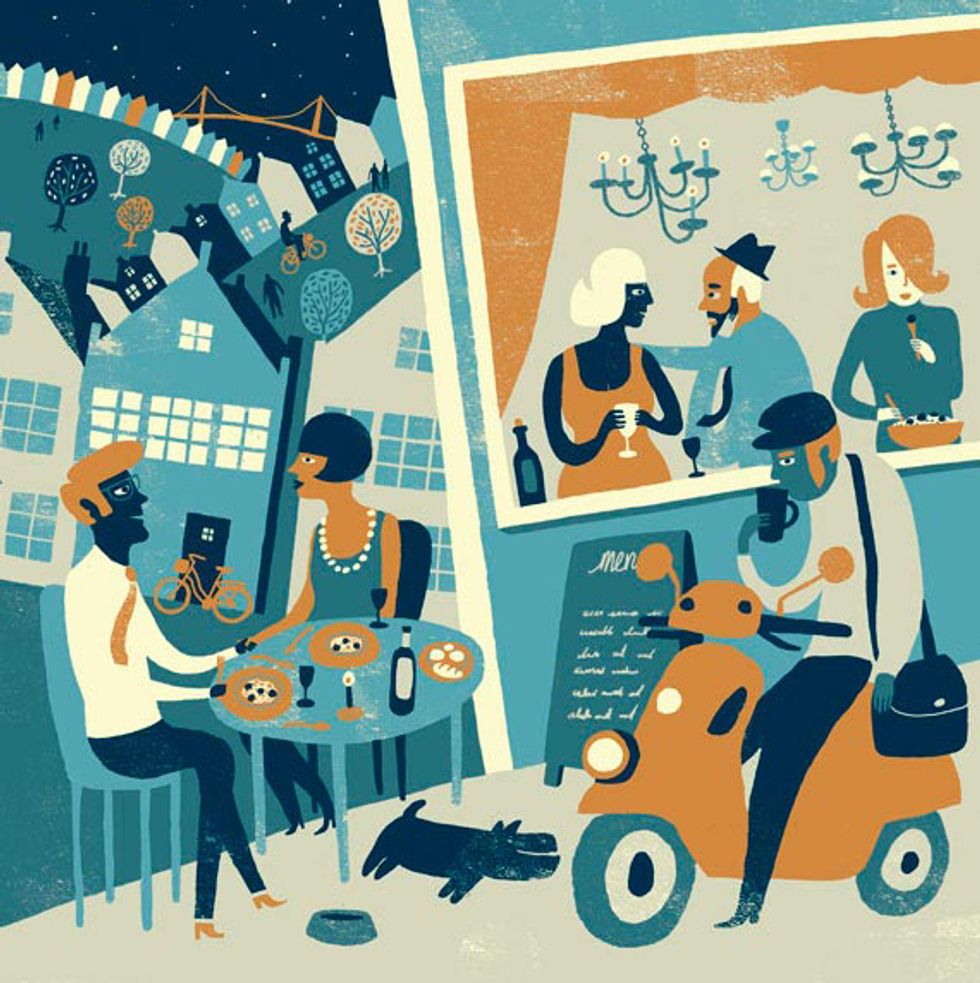 All eyes might be on the city’s Italian hot spots, but our true neighborhood restaurants are French. Flying under the radar with an average of 40 seats, SF’s bistros are refreshingly low on hipness and rich with steak frites. Straight out of your last trip to Paris, these seven are packed to the brim nightly with regulars often greeted by the owner with a kiss on both cheeks. Bon appétit!

Chef-owner Thierry Clement grew up in Orval, a village near Sancerre, where his parents own a butcher shop. In SF, while working at restaurants such as Fringale and the former Frisson, he dreamed of opening his own bistro. One day, he took a wrong turn (of course, while on his scooter—how French) onto a tree-lined street in Duboce Triangle. “I said to myself, Wow. It’s like a small village inside the city,” says Clement of L’Ardoise’s surrounding block. He recently took over the stoves at Le Charm too, the very first restaurant he worked at when he moved here. Not coincidentally, he’s engaged to be married to its owner.

Best seat in the house: Plant yourself at the bar so you can watch the kitchen action.
Signature dish: Coq au vin. “You can make this dish in an hour and a half, but it takes me five hours, plus the marinating. I’m very precise about it,” says Clement. —Sara Deseran

After 18 years of owning the popular Baker Street Bistro, Jacques Manuera’s eyes started to wander. His heart settled on an ex-crack house in NoPa that had been burned to a crisp in a fire. “It seemed like an interesting undertaking,” says the modest Frenchman wryly. Barely a year after opening Bistro Central Parc, a skip away from the Panhandle, the former drug den is now a neighborhood gathering spot with chef Nicolas Jardin—a Marseille-native who can say he worked with Guy Savoy (if briefly)—at the stove. It’s clear their devoted regulars have followed them. Not a moment goes by in the perpetually packed restaurant without hearing Manuera bid a customer adieu with a “bonsoir!”

Best seat in the house: A window table looking out onto the tree-lined street.
Signature dish: Juicy rack of lamb served with ratatouille. —Laura Mason

Twenty or so years ago, Chapeau chef and co-owner Philippe Gardelle moved to San Francisco to learn English. The self-taught cook from Toulouse has always loved to entertain. “When you come to this restaurant, it’s like coming to my house,” he says. The only French restaurant on a strip of Asian eateries and markets on Clement Street, Chapeau is a destination. And Gardelle is the perfect dinner party host, darting back and forth from the kitchen to the front of the house to make sure everyone is enjoying their meals. “During the day, I write the menu, cook, and choose the wine, but at night I like to be where everyone is,” he says.

Best seat in the house: The bar, especially for drop-ins.
Signature dish: Cassoulet de Toulouse. “I like to have a country dish on the menu,” says Gardelle. —Allison McCarthy

Before owner and Hong Kong native Lina Lew worked under Hubert Keller at Fleur de Lys in the early ’90s, she cut her teeth in kitchens all over France, including Michelin-starred Moulin de Mougins in the French Riviera. In 1994, Lew and her then-husband (whom she met in Paris) opened Le Charm. With its burnt-orange walls and white tablecloths, it has long offered a romantic respite on a busy corner of SoMa. Today, Lew floats between the front of the house and the kitchen, where she cooks with executive chef and fiancé Thierry Clement (see L’Ardoise).

Best seat in the house: A table on the heated patio strung with lights.
Signature dish: Cassoulet —Lauren Ladoceour

“French food doesn’t have to be a fancy occasion,” says Diana Braud, who once owned a wine bar called Millesimes with her husband Max Braud, right near the Odeon Metro Station in Paris—a casual spot where they crammed as much food as they could behind the bar. When the couple married, they decided to take their love of Parisian food to San Francisco, the only city that felt right for the little place they envisioned. They opened Le Zinc (the name is a colloquial term for “cafe” in France) 10 years ago and have cultivated a following of French customers who stop in weekly for a taste of home.

Best seat in the house: The one window table in the front is where the action is.

This red, storybook bistro located in the old Chez Maman space was transformed into Gamine three years ago when owner Stephen Bouillez bought out his former partner Jocelyn Bulow (the owner of Chez Papa and Chez Maman in Potrero Hill). Bouillez, who now runs the tiny 30-seater with his partner Susannah Dempsey, greets every single one of his guests as if he’s known them for a lifetime. He hails from Marseille and his food is the kind his grandmother used to make in the south of France. “We sell four cases of rosé every week because rosé is my milk,” he says. Oldies but goodies like escargot steeped in butter are on the menu, as are three kinds of mussels. On sunny days, the few seats under the awning offer some Parisian-style people watching mixed with Cow Hollow-style Lululemon fashion.

You could call owner Laurent Legendre a bistro-generating machine. The Paris native studied at Ecole Hoteliere and honed his chops at culinary institutions like L’Arpege and the four-centuries-old Tour D’Argent. But he gave that up when a 1996 vacation to San Francisco lured him westward for good. Soon after, he debuted the much-loved Clementine in the Inner Richmond, followed by Bistro Clement, before opening Le P’tit Laurent nearly four years ago on an angled corner of Glen Park so village-like it could be straight out of Amelie. And he’s  not done yet: Look for his new wine-and-oyster bar right across the street this spring.

Best seat in the house: The romantic  two-top in the window corner or the bar  if you’re solo.
Signature dish: The $22 three-course “neighborhood” menu, available Sunday through Thursday. If it’s on the menu, don’t miss the rabbit Normandy and the chocolate soufflé for dessert. —Robin Rinaldi

*Published in the April 2011 issue of 7x7 magazine