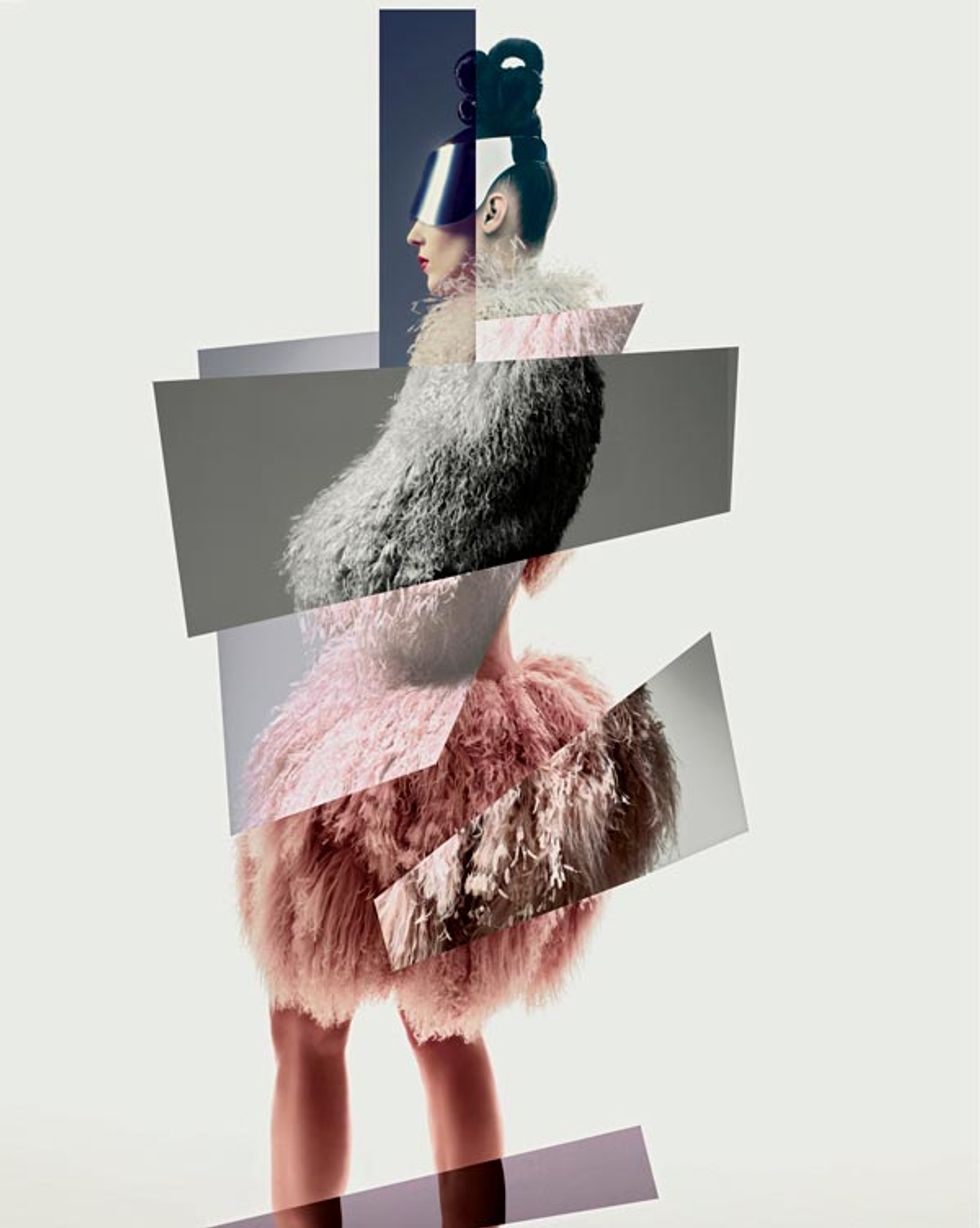 The Future of Fashion: The Collision of Retail and Technology

The collision of retail and technology has forever changed the way we shop, dress, and think about personal style. Sartorialists with digital chops are racing to cash in with startups from San Francisco to Silicon Valley to Manhattan, but what does it take to succeed in fashion world 2.0?

It may seem trite, but Heidi Klum’s famous sound bite about the notoriously fickle fashion business rings true. Yet reality hasn’t stopped generations of young designers from trying to make their way in New York City. Nor has it slowed the fast-moving, ever-multiplying Bay Area startup set, which, with sky rocketing valuations and a seemingly endless supply of venture capital, is still eager to gamble on fashion technology.

There is no shortage of style websites, subscription services, flash sales, curated e-commerce models, and secondhand shopping apps to sate the gold iPhone–carrying fashion maven. But realistically, her manicured thumbs can navigate only so fast. And even in wealthy San Francisco, her budget goes only so far. So is there really enough money and business to go around? And if this happy little bubble bursts, which of these startups will stay in and which will be out?

Unlike the fashion world proper, it seems anyone can break into Sartorial Startupland, even without industry experience. According to Yuli Ziv, founder of the Fashion 2.0 Awards and CEO of the New York–based influencer-marketing platform Style Coalition, many upstarts have an overly simplistic view of what it takes to succeed in a business that celebrates newness. Ziv, whose company has worked with Microsoft, Macy’s, and Hearst Digital Media, speaks from experience: She is also the founder of style site MyItThings and has authored two books on the subject of fashion technology. She says that right now it’s especially tough to make a startup work.

“There’s a level of skepticism among investors who have been burned by a startup that fizzled after six months,” she notes. “There are e-commerce success stories, such as Polyvore, but nothing that is necessarily new. It takes time to build a fashion brand from scratch.”

If profit is the mark of success, then Mountain View–based Polyvore and San Francisco–based Modcloth may be good case studies. The social commerce site Polyvore, which launched in 2007, has been profitable since 2011, and currently sees more than 20 million unique visitors per month. Although the private company won’t disclose its figures, a spokesperson says the business’ model of native and performance advertising is generating a positive cash flow. Meanwhile, Modcloth, an online purveyor of vintage-style clothing, which first launched in 2002, is reporting sales north of $100 million per year.

But Ziv says it’s not enough to be profitable now. For a startup to be sustainable, it must scale up and evolve quickly. To that end, Polyvore plans to launch new beauty and home design verticals, while Modcloth is expanding with a plus-size offering, tapping into a market that many retailers refuse to cater to.

Unlike these old guard startups, Ziv says few newcomers really focus on technology—many “get carried away over press coverage or their number of early adopters. None of it matters if you can’t make money, and very few manage to create real revenue.”

And perhaps just as few are disrupting the market. To be a true disrupter—that is, to change the nature of an industry and the way that products are consumed—a startup must solve a problem; it must fill a void in its category. By this definition, Madison Reed—a South Park–based company that, this spring, launched ammonia-free hair color at a fraction of salon prices—just might be a game changer. (Full disclosure: 7x7 editor Chloé Harris is a Madison Reed adviser.)

With an experienced team of founders—Sabrina Riddle (formerly CEO at Swaylo), Eric Hutchinson, and former Maveron venture capital partners Amy Errett and Andrew “A.T.” Trader (a cofounder of Zynga)—Madison Reed offers a safer alternative to chemical-laden hair dye but aims to make purchase and use simple. A client can sign up online for a subscription with home delivery, as well as get help from expert color advisers in selecting from 27 shades. She can then DIY it at home or take the product to her stylist. In a nutshell, Madison Reed hopes to offer a cheaper, more natural, and more convenient solution for a customer who’s already coloring her hair.

Errett admits that nothing is certain. The worry that “we have this party and no one comes” keeps her up at night. Fair enough: A startup can have all the hype and traffic in the world, but does the buzz convert into sales?

Ann Miura-Ko, a regular lecturer at Stanford’s School of Engineering and cofounder of Floodgate—an early-stage fund that has invested in Modcloth, Refinery29, and, more recently, the SF-based “community for all the world’s shopping,” Wanelo—says successful startups must rely on acquiring users organically. If they don’t, “even if a company grows, it will be at the mercy of finding the next set of investors to acquire the next set of customers,” she says. “A business must be capital efficient.”

In targeting women who color their hair every six weeks on the mission of covering grays, Madison Reed courts a market with infinite lifetime value. “Once you start coloring your hair, you don’t stop!” affirms Errett (a blonde, whose longtime Union Square stylist, Alex Chases, now colors her hair with Madison Reed product). And the numbers back her up. The home hair color industry rings in at a staggering $3 billion annually, with 89 million American women coloring their hair and nearly half of them doing it at home. So far, Madison Reed has raised $16 million, which it is investing in engineers, certified colorists, and the growth of its supply chain. The company is also exploring hair color and products formulated for men, a growing demographic that is still underserved by the beauty industry.

Buzzy local startups Stitch Fix and Everlane can also check the box for organic growth. Since its launch three years ago, Stitch Fix—a subscription service that offers personal styling tips and delivers hand-selected wardrobe items to women’s homes—has shipped more than 100,000 boxes of clothing, with each piece priced at around $60. Stitch Fix raised more than $16 million in two rounds of funding in 2013. Until it recently hired its first PR manager, the business had grown entirely by word of mouth.

Meanwhile, Everlane, a direct-to-customer purveyor of quality basics, is tapping into the viral opportunity of Twitter and Tumblr campaigns to spread its word. And fashion editors are listening—Everlane has a cult following among industry vets in New York: “It’s genius because they sell these inexpensive shirts but make it all look so luxe,” says Amina Akhtar, an editorial brand consultant.

That’s all well and good, but can these companies compete over the long haul? David Freschman, founder and CEO of Fashinvest, a firm that connects startups such as The Real Real and Bib+Tuck with potential investors, offers a warning: “It’s relatively easy to launch a fashion startup today, almost too easy,” he says. “Approximately 90 percent of them fail—so many of yesterday’s darlings are flat and running out of cash. So founders have to ask themselves, ‘Are we doing anything that’s unique? Do we understand how the consumer will buy our product?’”

Being unique can be a challenge in the startup game where copycatting is prevalent. Take the now-ubiquitous virtual closet app. Since Stylish Girl launched in 2008, several other similar apps have followed, including Menlo Park–based Poshmark. The largest mobile marketplace for buying and selling fashion to date, Poshmark’s community of more than 300,000 members have opened their closets to one another, purchasing 1.5 million wardrobe items in 2013. But “there’s only a very small percentage of people documenting everything in their closet,” says Ziv. “How many [virtual closet apps] do we really need?”

Breaking away from the mass-fashion pack, two-year-old Cuyana focuses on a “lean closet” philosophy. From their headquarters and showroom overlooking Union Square, cofounders Karla Gallardo and Shilpa Shah have created an online space to sell global artisanal items (think Peruvian alpaca and Scottish cashmere) at nearly wholesale prices. Among Cuyana’s early adopters is Macala Wright, a strategic B2B marketer who has consulted with eBay, Stylemee, and Teen Vogue. Wright thinks Cuyana, which raised $1.7 million in summer 2013 from Canaan Partners, is poised to go the distance because it caters to a shift in behavior: More consumers are seeking quality over quantity.

“We were inspired to do this because of the excess we’ve seen in the fashion industry.…The extra stuff we had accumulated left us feeling more overwhelmed than excited,” says Gallardo, who notes that in 2011 they had no competition for direct-to-consumer brands “encouraging customers to adopt a philosophy of fewer, better things.” Hence, Gallardo says, “branding is our key differential to eclipse the competition, and we’ve worked to carefully cultivate our strategy. Designs and materials may be easy to copy, but the meaningful connections we make with our customers are definitely not.”

Significant relationships with consumers may be the key to longevity for startups such as Cuyana and Madison Reed, which put supporting the true needs of women at the core of their business models. And there is certainly room for growth. The rise of mobile and social media is further fueling the democratization and globalization of fashion and beauty retail.

But anyone who’s hung around SoMa or Silicon Valley for very long remembers the dot-com boom of the 1990s and its subsequent bust. And with so much activity and soaring valuations, you might wonder whether it will all come crashing down again. Freschman doesn’t think so. The difference in today’s boom, he explains, is that “companies are generating revenue. Those accelerated valuations are often justified.…We will see a continuing evolution of technologies, of course. Some will come in and go out, as does fashion. But this is an industry that is going to stick around.”

This past January, at the National Retail Federation’s annual BIG Show, Forrester Research analyst Sucharita Mulpuru forecasted clear skies for online retail in 2014, projecting close to $300 billion in direct sales. She says the really interesting number is the additional $1.4 trillion in sales that will be influenced by the web this year. It’s tough to argue. Fashion technology isn’t just an industry: It is, increasingly, our way of life.