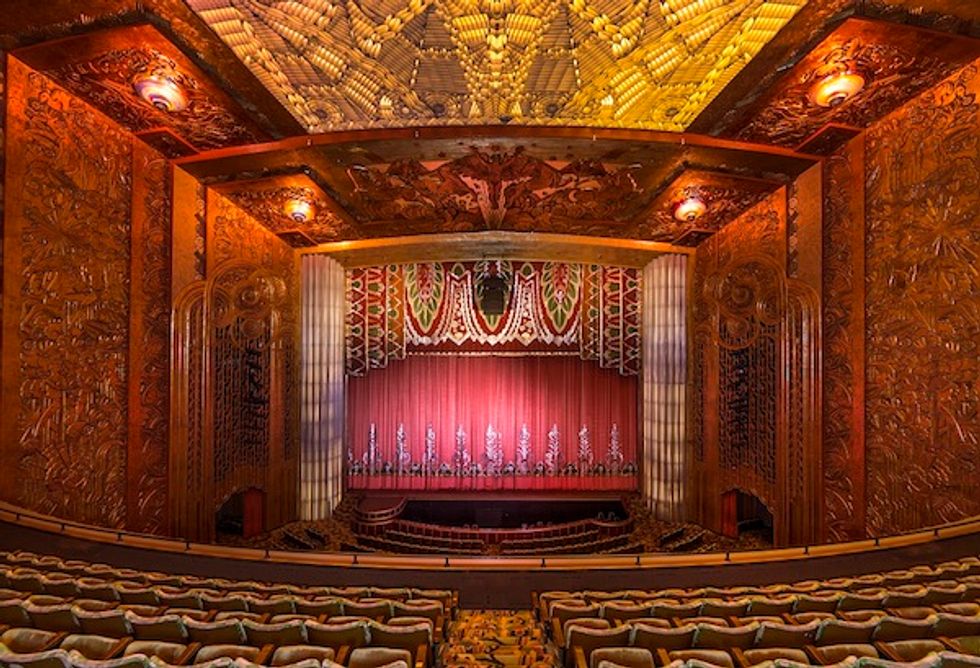 The Gilded Glitz of The Paramount Theatre

Commissioned just three months after the Stock Market crash of 1929, the Paramount Theatre was designed by San Francisco’s Timothy L. Pflueger, who also designed the Castro Theatre, Top of the Mark, Bimbo’s, and most of the important architectural landmarks of the Bay Area. The theater's history is just as storied as those intricately designed walls might suggest.

Pflueger assembled a superhero squad of artists, architects, and engineers to give life to the project, with a brusque directional starting point, suggesting that his cohorts do some “free-wheeling research within the avant-garde” before beginning.

When it opened in 1931 (less than two years after that vague assignment), the Paramount was not only, at the time, the largest multi-purpose theater in California and the West Coast, it was also a pre-Art Deco masterpiece.

From the ten-story high muraled facade to the brocaded drapes to every single modicum of detail in every etch and stitch, the Paramount was worth every penny of its reported $3 million dollar price tag (which translates to roughly $42.8 million dollars today).

The women's smoking room. Photo via The Paramount's website

Even after nearly three decades of managing the venue, Paul Botto remembered that "walking around the building during concerts, standing there and looking at the features on the walls, there [was] always something new to discover."

As the Oakland Tribune reported in December 1931, the Paramount “add[ed] greater beauty and splendor to our city, standing as a magnificent tribute to its architects and builders.”

But beauty doesn’t ensure success. The venue changed hands several times, fluctuating in revenue due to WWII and the state of the film industry, eventually closing its doors in 1970 after its last movie screening: The Beatles’ Let it Be.

After a short stint under the ownership of the Oakland Symphony Orchestra, the building was eventually sold to the city for $1, along with their extensive collection of sheet music (which remains one of the largest in the country). The theater doesn’t screen movies much these days (however, they will throw one in for good measure now and then), but it does usher in some of the finest music pit stops in the Bay Area.

Though some wanted to update the space to feel more modern when it transitioned to a live-music venue, independent donors protested. "[The challenge] was convincing people that the art deco style of the theater was an important artistic expression and should be preserved as is," said Jack Bethards, member of the renovation team. "There was some pressure to modernize the theater, and we resisted that."

Prominent bookings happened almost immediately. One time, Tom Waits performed to benefit his friend on trial for conspiring to sell LSD. Four years later, Chet Helms, famous for discovering Janis Joplin, photographed James Brown at his birthday concert. A 17-year-old Britney Spears gyrated to her '...Baby One More Time,' and a man proposed to his girlfriend on stage as Jagged Edge sang 'Let's Get Married."

After all, there are only a few venues in the Bay Area where you might catch a legend like Stevie Wonderaccompanied by a 33 piece orchestra, or run into a chef extraordinaire gushing about a young pop star like Enrique Iglesias in the lobby.

The Paramount itself is almost as famous as the talent gracing the floorboards. Take a walk through its door, and you’ll be taking part in its legacy too.