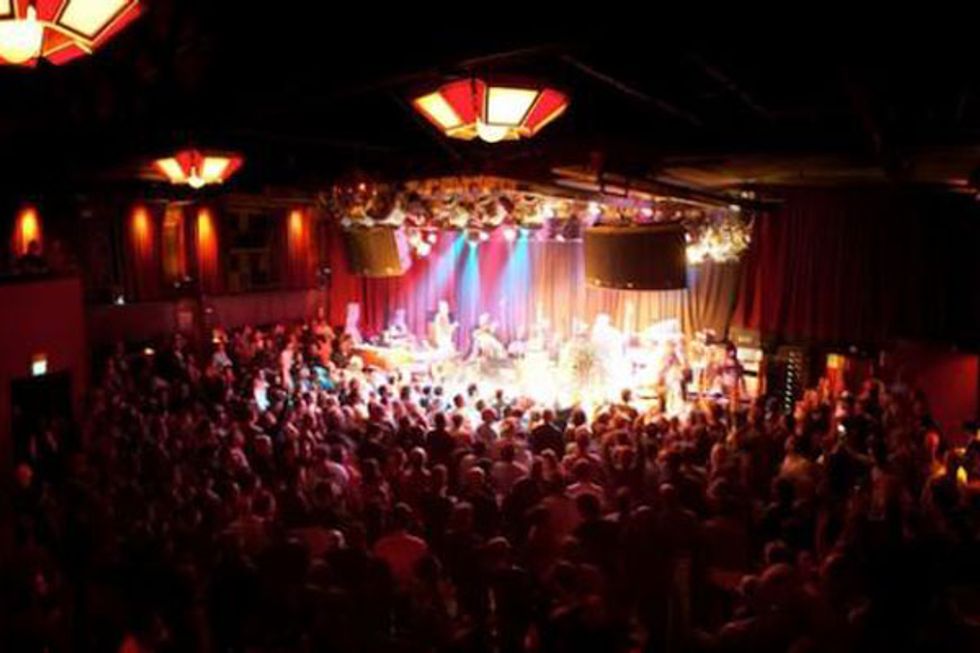 The Jazzy Legacy Behind The Independent

In 1967, Herman Warren sat with 49er Kermit Alexander in a bar called Emanon at 628 Divisadero Street. Warren owned Sugar Hill, a blues venue on Broadway, but joked with Alexander about opening up a low-key hangout spot. At first it was only a joke — until he threw down an impromptu offer to claim the space.

Soon after, Warren and his wife Norma opened The Half Note Club at 628 Divisadero, a jazz club boasting an elite lineup of demi-god performers like Thelonious Monk, Miles Davis, and Al Jarreau (whose career they started when they gave him a spot singing with the George Duke Trio). To this day, there’s even a backyard behind the stage with a cement patio in the shape of a half note to commemorate that chapter in the venue’s history. Last year, Killer Mike and El-P barbequed on it before their sold-out show.

A picnic table on the patio behind the stage at the Independent. Photo: Alyssa Pereira.

The clientele in the 60s and 70s, by Warren’s own account, consisted of a lot of major league athletes, and the staff even had a friendly softball rivalry with a competing jazz club up the street, The Both/And. The losing team would have to drink at the winner’s bar. The Half Note’s team, led by a young politico pitcher named Willie Brown, tended to win most of the time.

One of the Green Rooms at The Independent. Photo: Alyssa Pereira.

Overall, the venue was well liked. “I think congratulations are doubly in order when seemingly every other club owner in town is hiring half-nude chicks in the rat race for a greedy dollar,” read the June 26,1965 edition of The Sun Reporter. “It’s nice to know at least two club owners who didn’t join the stampede.”

The Half Note eventually evolved into other things, as places always do in San Francisco. For a while it was Da Viz, (or The Vis, depending on who you ask), which hosted punk and experimental bands. Then, as many people remember, it became The Kennel Club.

The Kennel Club hosted bands that became the foundation of alternative music — Nirvana and Jane’s Addiction to name a couple — and it served as the birthing point for one of the city’s most famous festivals, Noise Pop.

A little over 10 years ago, Allen Scott took over 628 Divisadero and partnered with Bill Graham Presents expats Sherry Wasserman and Gregg Perloff, who had just began their own company, Another Planet Entertainment. The Independent was born. As Scott said, “We wanted to stand alone: independent thinking, independent music.” Clearly, naming the joint was the easiest part.

Today the venue, managed by Jonathan Gunton, aims to bring high value shows to their small venue. The production staff boasts pros who have toured with The National and Okkervil River, and can tell you first hand that Dave Chappelle is the most down-to-earth, normal guy. In their own words, they’re a family, and they want everyone to feel comfortable and happy to get to a show at their home.

The Independent opts for quality in production above all else: they remodeled everything in 2010, their lighting bests all other venues under the size of the Fillmore with 12 LEDs among 18 moving lights, and they’ve installed a state-of-the-art soundboard. But that’s not where their star power comes from — they often book artists who in most cases have a talent bigger than a venue the size of the Indy generally holds.

The stage has seen the likes of John Legend, Green Day, Levon Helm, Bootsy Collins, Arctic Monkeys, Bon Iver, Beck, and more. The Walkmen even commemorated their 10-year anniversary there two years ago. To call it a legacy is selling it short.

When George Duke passed last year, Half Note owner Herman Warren remembered something Duke’s mother said to him when they agreed to let the then 18-year-old play the Half Note regularly. Looking around the room at 628 Divisadero, she said, “‘The students are running the school.’ Back then,” Warren remembered, “we liked to have fun.”