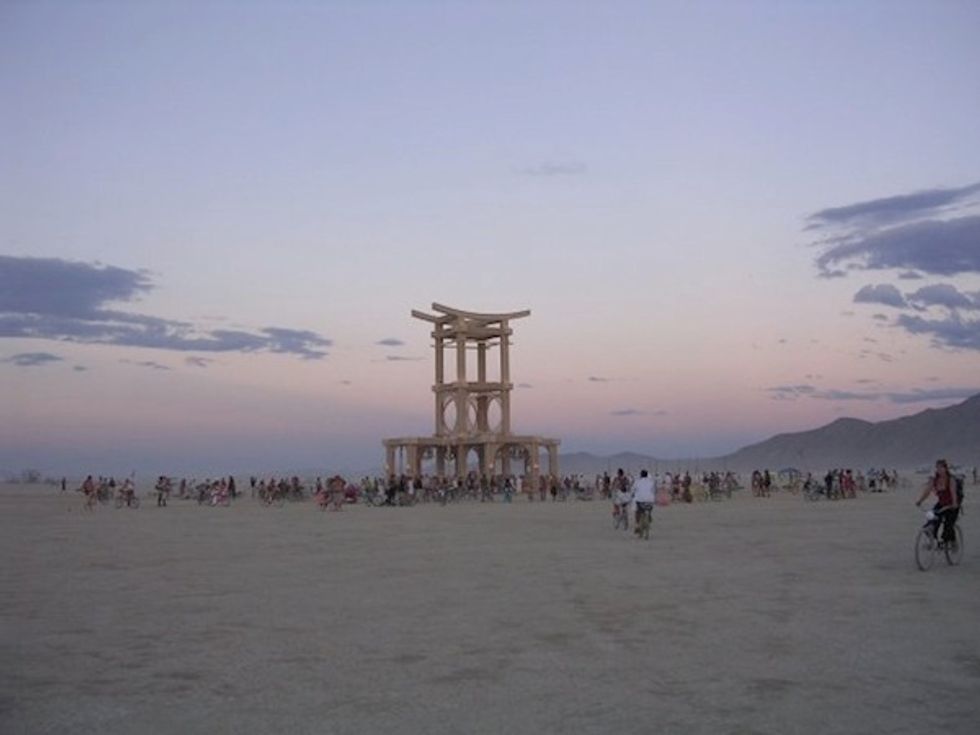 The Misconceptions of Burning Man

On a call a few days ago, the web developer sheepishly told me, “So, the last week of August I won’t be on the call because um, well (pause), I’m, uh (whisper) going to Burning Man.”

It’s undeniable that Burning Man has a particular stigma in San Francisco among those who have not experienced it. It’s a stigma that makes virgin Burners ashamed to admit they are finally going to give it a try.

I, too, was one of those uninterested and apathetic on the whole Burning Man thing. Five years ago, I went. And yes, it was amazing. The fuzzy boot-clad, sparkle-adorned, die-hard Burners may intimidate (or scare) you, but Burning Man is misunderstood by most. Here’s why:

What kind of vacation is that?

Where can you go in the world and completely escape all technology? I mean no cell phone reception, no laptop, no WiFi, no texting, no Skype. Very few places - deep in the Amazon, the middle of the Sahara desert, North Korea, perhaps. I have personally traveled to dozens of countries and when I least expect it, the temptation to connect is always there.

Not so at Burning Man. There is…nothing, just you and human interaction. Remember what that’s like? After five days without a phone or Internet, I felt like I had been on vacation for three weeks. It’s amazing how relaxed and rejuvenated you can feel after a mere few days of unplugging. Completely.

It’s only for the young kids.

The delusion that Burning Man is for the young is just plain wrong. I met old, young, and every age in between. During a blinding dust storm, my stranded friends and I hunkered down to wait it out with a few folks nearby. One was a 58-year-old guy who had just dropped his last son off at college and detoured to Burning Man on his drive home. Another moment, I got a flat tire while cruising through the city. A nearby group called me over to their camp so they could help. These spring chickens had been attending every year for 20 years. In general, the age spectrum leans older, not younger.

It’s just like any festival, been there, done that.

No it’s not. It’s not a music festival. It’s not a carnival. It’s not an art fair. It’s all of these things and yet none of them. It’s an experience and an event unlike none other. I didn’t get it either before I went. I listened to seasoned Burners tell me of this magical place in the desert that nobody could quite explain in full sentences, It’s just…amazing. It’s just…you have to go. In hindsight, they were right.

And frankly, it’s incredibly beautiful. Distant purple mountains silhouette the pink dusk sky and eerie post-storm calm fills the dry air as the residents of Black Rock City emerge from their shelters. There are art installations scattered across the landscape as far as the eye can see – five years ago, there was a giant seesaw, an ornate temple, and two tractor-trailer trucks balanced precariously, grill to grill, in a towering S-shape.

Sure, there is that aspect of it, and you can choose to take part in it, or not. Similar to any other event, some participate and some observe. And how you choose to participate is up to you. Take Bay to Breakers. Some SF residents go full throttle with costumes and booze galore, others run the race naked, others simply run or walk the race, others observe from the sidelines, and still others peek out from their windows and capture the moments.

Burning Man is whatever you want it to be. For me, much of the memory is the bonding I experienced with new friends who, five years later, are still my closest peeps. Surviving the desert elements is not easy. It’s hot, it’s dirty, and it’s exhausting. Burning Man can restore faith in humanity. I remember the people who fixed my flat tire, and offered me water, and hung out with me when I lost everyone I knew.

It’s all fun and games.

Yes, it’s definitely a playground for adults. But, it’s also life, and just like on any vacation, the weather doesn’t cooperate, people get sick, and you still have to deal. My first day at the Playa, we set up camp in the midday sun (not smart). A few hours later, I had a dull headache from the altitude and the first dust storm voraciously blew through. As the men hammered rebar into my shade structure, I hid away in my tent, claustrophobic from the surgical mask on my face, and watched layers of dust seep through the tent zippers, ever so slightly scared about what the hell was happening.

It can’t be talked about at work.

Lots of people feel the need to keep their trips to Burning Man a secret from their employers. Judgment is a bitch. At the time I went, my biggest client was AAA. I took a business trip to North Carolina soon after Burning Man, and my 65-year-old buyer in Charlotte (who I had told where I was going, because a. I was out of the office and b. I’m a shitty liar) exclaimed, “I saw the Fire Man on TV, weren’t you at the Fire Man? It looked so cool! Wow.” One of those morning shows had done a feature on Burning Man. And yes, my parents saw it too and asked, “Were you one of those people riding a bike in the desert?” But, be proud. The person you least expect in your office might also be going!

Why have I not returned? It’s not from lack of wanting. Burning Man is an investment in time, money, and vacation days. As with any trip, if you lack any of those, it’s difficult to go. In one week, I’ll feel the pang of desire in my stomach and tell myself, “Next year, for sure.”

Inside the Gallery-esque Home of SF Art Influencer Francis Mill