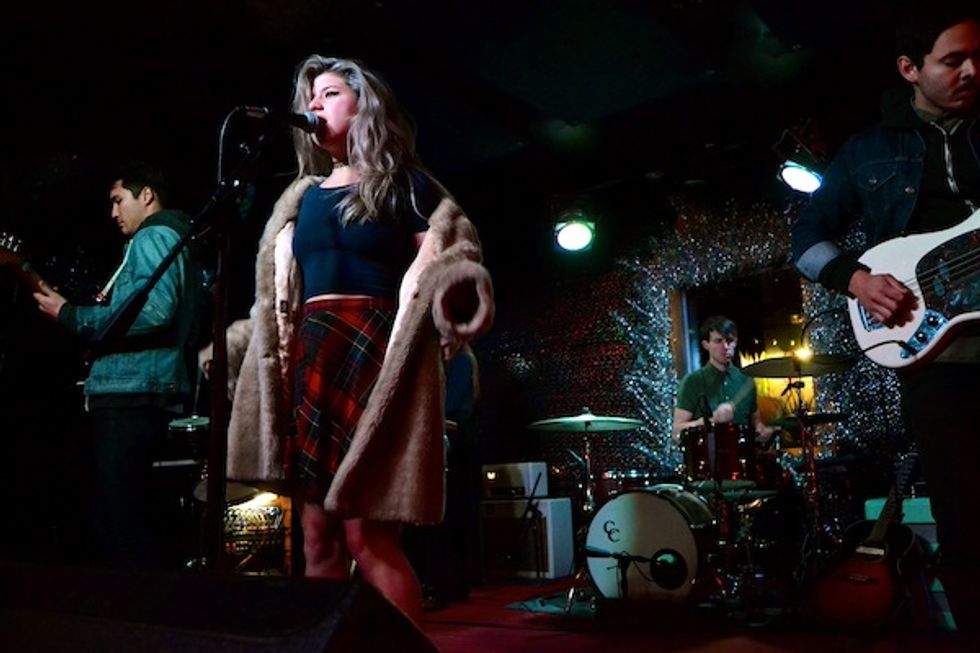 The Rollicking Roots of Bottom of the Hill

The first person to shatter the window behind the stage at Bottom of the Hillwas Green Day’s drummer in 1998 during the filming of MTV’s The Ten Spot. Rather than replacing the window with a standard double pane glass, the staff agreed to let a regular patron, dubbed “Paul the Glassblower,” create a custom-made, prismatic stained glass proxy. It has again been broken since, unfortunately (by the singer of the Dillinger Escape Plan), but that idiosyncratic work in situ symbolizes the Potrero Hill staple: colorful, quirky, and vehemently DIY.

Photo courtesy of Bottom of the Hill

Kathleen Owen and Lynn Schwarz, two of Bottom of the Hill’s four owners, make a point to keep it that way. The space’s numerous shelved baubles, trinkets, and the odd bust here and there are items that they uncovered at garage sales or hidden in their own storage. The wall on the patio outside (an idea of Owen’s) was created by stacking milk cartons and filling them with greenery, and the mosaic border over the yard’s doorway was a project of their own a few years back.

Most holidays, BotH decorates the fireplace mantle like a shrine, inviting concertgoers to contribute their own curios. By the time the season is over, the altar has been entirely redesigned by the venue's loyal community.

Bottom of the Hill's fireplace in "ordinary time." Photo by Alyssa Pereira

Speaking of which, Bottom of the Hill has always been a proponent of the community. At one point, it was an Italian-owned soda fountain, later becoming the 17th St. Restaurant Club, which served lunch daily to around 300 blue collar neighbors working at the piers.

Courtesy of the Western Neighborhoods Project

Around the late '70s/early '80s, the venue eventually morphed into the space we now know today. Bought in 1989, it opened as Bottom of the Hill in 1991. At first, it operated as a restaurant, as it had done for decades, but intuitive music bookings by co-owner Ramona Downey led to bigger and better acts. The action on stage eventually shined brighter than the kitchen. Apparently, a restaurant can’t just book a young Marilyn Manson without upstaging the food.

Courtesy of Bottom of the Hill

BotH's staff has a slew of memories about the now-giant musicians who have graced the stage. For example, the first time the White Stripes played there, back in 2000, the cooks were grilling barbeque and the room was only at half capacity. When Jesus Lizard performed, David Yow crowd surfed right through the kitchen window. And when a radio DJ let it slip that Beastie Boys were playing a secret show under the pseudonym Quasar back in 1996, some 1,200 people showed up to storm the sold-out concert.

The venue has been immortalized in a NOFX song, and the stage has seen acts from Pavement to Bad Religion to Elliott Smith to Arcade Fire. Death Cab for Cutie, a headliner at this year’s Outside Lands, has played at the Potrero Hill joint eight times. Clearly, Bottom of the Hill has seen its share of great acts, but that doesn’t mean they’ve forgotten their hospitality roots.

“When a band is touring, they need to be treated well. It’s so exhausting touring,” Schwarz says. The venue aims to treat musicians on the road and patrons alike as family. “That’s our number one goal, besides having cutting edge rock shows.”

A fire broke out in 2003, ravaging the upstairs. “Our bar staff was so freaked out that [our bartender] left the Guinness tap running and ran out,” Schwarz remembers. “One of the customers went and, like, drank all the ends of people’s drinks!”

Courtesy of Bottom of the Hill

The venue bounced back, of course, with the support of both the community and their loyal fanbase. Now, over ten years later, they continue to run as a staple of the Potrero neighborhood. “We’d just really like to foster an air of this being a family experience. We don’t put up with any employee who is mean and unhelpful and unfriendly,” Schwarz adds. “We just like to treat people how we’d like to be treated.”