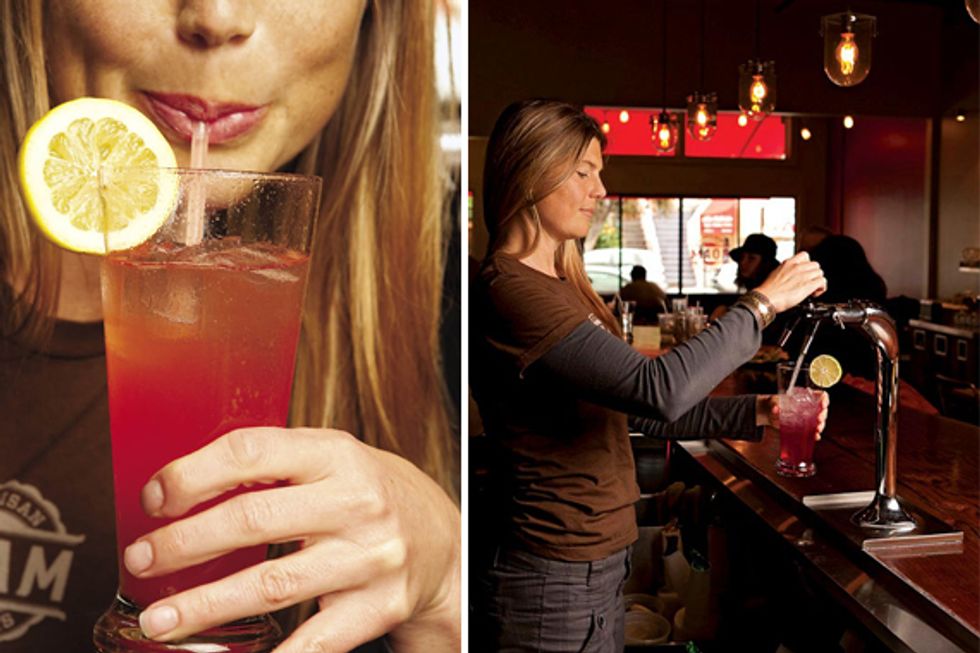 Just as Coke heads are going into withdrawal from the soda ban on city property that took effect last spring, restaurants around town have started serving up healthy alternatives—housemade sodas. Made without the dreaded corn syrup, these sodas are chaste enough to give Gavin a platform to stand on.

Roam Artisan Burgers, which calls its menu “mindful,” gently sweetens its sodas with agave nectar and makes a caramelized pineapple flavor that’s so refreshing, it demands beachfront property. At Local: Mission Eatery—which has experimented with everything from tangelo cream soda to blackberry-thyme—owner Yaron Milgrom says, “Most of our sodas have an ingredient list like this: fruit, herb, water, sugar.” (Sugar as final ingredient, dutifully noted.) They charge their sodas in the soda siphon for every lunch service and dispense them directly.

Over in South Park at The American Grilled Cheese Kitchen, the lines might be for the fromage, but the sodas are the next biggest seller. They evolved out of something that had been brewing even before the restaurant came to be, says Nate Pollak of his co-owner’s concoctions. “Heidi [Gibson] was preparing a plan to launch her own line of artisanal cocktail mixers for bars, made of fresh seasonal fruits, herbs and spices. Those are now our soda syrups!” To go with your sandwich, choose from flavors such as grapefruit–pink peppercorn or spiced pomegranate—something that sounds perfect for meeting a sharp-cheddar-and-bacon-filled Mousetrap head-on.

Perhaps the healthiest alternative, though, would be from Eatwell Farm, which is selling what it calls “softers”: lacto-fermented, natural sodas that contain living probiotics. In the old tradition of sodas, Eatwell’s Lorraine Ottens, fiancée to farmer Nigel Walker, is making them herself in flavors such as lavender, lemon verbena and rosemary, using herbs from the farm. If I didn’t think they’d have a Coca-Cola lawsuit on their hands, I’d suggest to Ottens that her slogan be “Have a Softer and a Smile.”