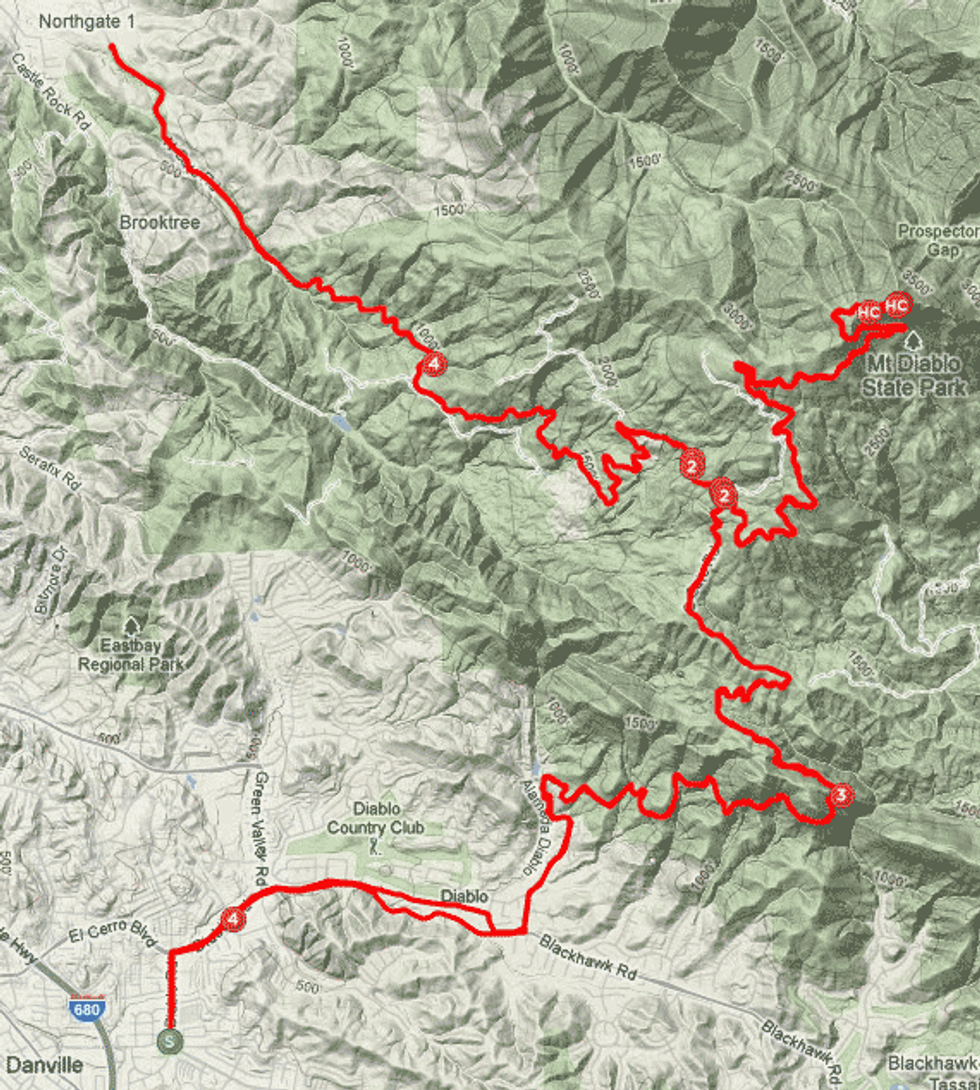 Mount Diablo is one of the dominate features of the Bay Area landscape, visible from each of the surrounding nine bay counties. It’s one of a trifecta of local summit ascents that every climber should commune with on a regular basis. The others are Mt. Hamilton overlooking San Jose and Marin County’s Mt. Tamalpais. To quote the Wikipedia article about the mountain: “Countless peaks in the state are taller, but Mount Diablo has a remarkable visual prominence for a mountain of such modest elevation.” The article notes that the viewshed is one of the largest in the western US (also debunking a local myth that it is the second largest in the world after Mt. Kilimanjaro).

Therefore an ascent of this fabled peak offers up a stirring visual reward to counter any suffering you’re likely to encounter on this Strava rated HC (above category) climb. There are two directions one can tackle Diablo, north and south, and each are equal in difficulty. This ride describes tackling both as single ride, giving the rider the opportunity for a 50 mile, 7,200 foot day. Extreme cycling masochists savor a quad ascent of Diablo for the ultimate century.

The “classic Diablo climb” (as used in the annual October Mt. Diablo Challenge Hillclimb race) begins at the Athenian School that is situated about a half mile from the State Park South gate. This area has narrow streets and can be crowded on weekends. A preferred start point is Bret Harte Park, just east of the Diablo Road exit on Hwy. 680. Starting here will give you a 2.5 mile warm-up before the actual climb begins. From the BH Park continue on Mt. Diablo road as it curves east, and after 2.2 miles turn left on Mt Diablo Scenic Blvd. and you’re on your way up. The road twists through an upscale neighborhood and after passing through the South Gate there is no other direction to go but up. You’ll be gifted with ever better views as you make you way around the southeastern flank, and after a few more miles you’ll see some great rock formations popular among rock climbers down to the right. At 9.5 miles you’ll reach the junction with the South Gate Road. Restrooms and water are available here. Continue by making a right to resume your suffering (the next 4.4 miles are at 7.1%) and like most great experiences in life, the best is last or in this case an average 15.2% for the final 250 yards.

At the summit you’ll find restrooms and water and a great excuse to get off the bike and look around (and far). If you’re unfamiliar with any part of the Bay Area, bring a map along to identify the distant peaks and waterways.


The descent can be a bit tricky, especially if it’s windy out, so use caution. Those seeking the double dose of Diablo should turn right at the junction and head down toward the North Gate. If once is enough for you, turn left at the junction to return to the start point. The North Gate Road is definitely the road less traveled in the park and in spring the wildflowers can be spectacular on the grassy slopes. At the park entrance, turn it around for a big helping of seconds, making the left at the junction for your déjà vous moment. For reasonably fit cyclists the two ascents should take four to five hours. The actual numbers for each climb are: