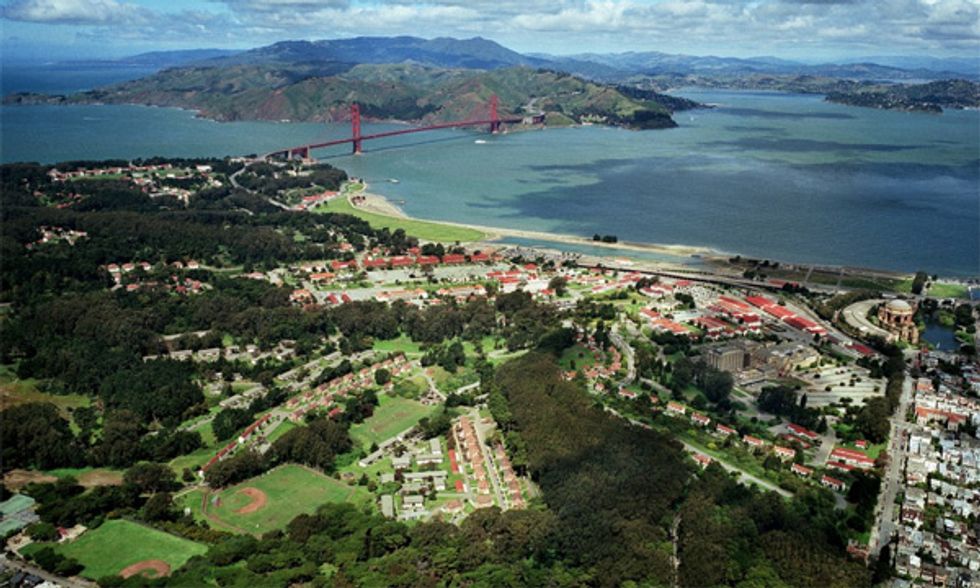 First founded by the Spanish in 1776, the one time strategic and fortified base known as Presidio in San Francisco became, 218 years later, the integral core of the GGNRA with the transfer by Congress from Army control to the National Park Service in 1994.

Thankfully, the Presidio Trust is charged (also by Congress) to oversee and manage this incredible urban resource, and the Trust has made great strides towards making the entire post bike friendly. On any given day hundreds of cyclists, from tourists to tri-athletes, utilize the 50 miles of roads that the crisscross the area.

Our sixteen-mile route today is designed for the more serious recreational cyclist looking for an intense, hour-plus workout (there’s 1500 feet of elevation gained and lost). With that in mind, an early start is essential to let you focus on your form rather than avoiding the many wheeled and walking dangers– until you become familiar with this route be super cautious. Start in the parking lot at the Eastern end of Crissy Field, then head West toward the bridge on Mason Street and get the legs warmed up. There are two options here: the bike lane on the road or the path on the sidewalk–the former is preferable when clueless tourists abound.

At the intersection, make a short left then a sharp right for a short uphill onto Crissy Field Avenue to begin our first climb on Lincoln Boulevard. Each climb and descent is numbered in order and marked on the map below, with red indicating up and green down. At the crest of Lincoln, after a quick glance to the right to take in the amazing view, we get a fast series of downhill "S" turns to Baker Beach, at which point you'll turnaround and head back up (climb #1).

https://sfbike.org/resources/maps-routes/Back up at the crest, hang a couple of rights and we’ll build some speed and rhythm on Washington Boulevard as we head over to the Arguello Gate entrance. Here, a careful left will swing us over to the Presidio Gate at the SE corner of the park via West Pacific Avenue. Another swift downhill (descent #2) gives us a preview of a coming attraction (climb #5). We'll stay on Presidio Boulevard by hanging a left at the third intersection and back towards the top via Funston, then up Arguello (for climb #3). At the intersection with Washington we'll go right and come back over to Lincoln Boulevard.for yet another fast descent (#3) back down our first climb.

Rather than turning down towards Crissy Field (the way we came up is a one-way) we'll go under Doyle Drive (arrows on the map) and make an uphill right on Park Boulevard for another short but steep climb (#4) back up to Washington Boulevard. This time going left to reconnect with Arguello, you'll go down to your left at the stop sign to make descent #4. At the main parade grounds reverse our earlier route and continue onto Presidio Boulevard for the final climb (#5) up to the Presidio Gate, then right on West Pacific, right again on Arguello making the left back onto Washington and backtracking our start point via Park Boulevard and McDowell (descent #5, follow the arrow). A couple of rights at the pet cemetary take us back to Mason Street and Crissy Field. Now, go do it again. A very detailed map of the Presidio Bike routes is available from sfbike.org.

For more the complete story on how the people of the Bay Area have so much access to open space, check out the movie "Rebels With A Cause".