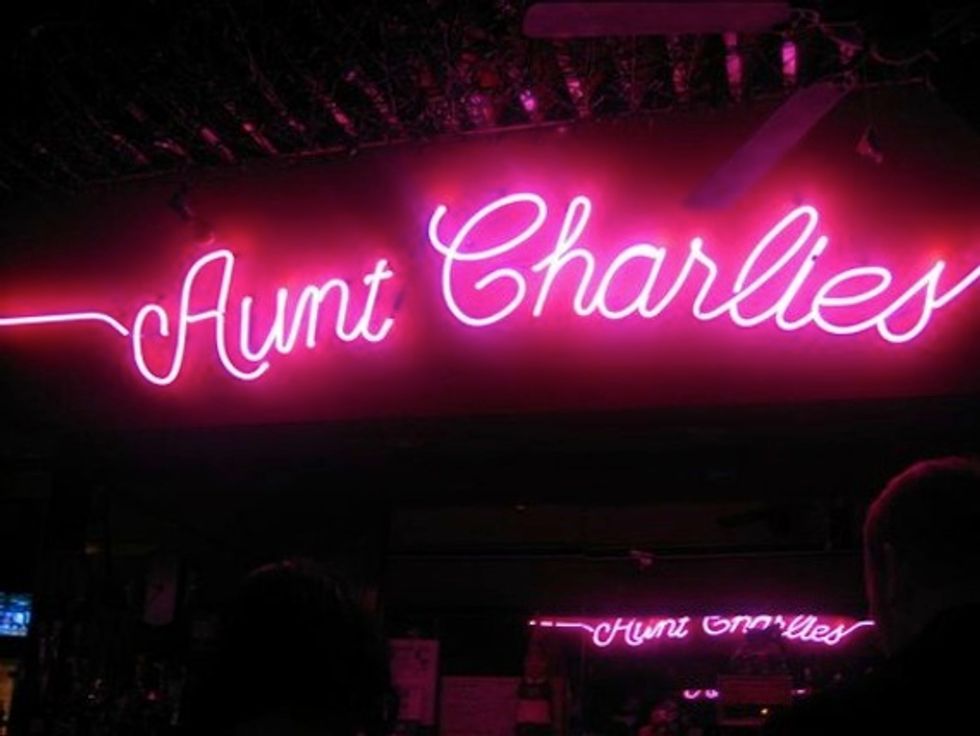 I used to joke that Aunt Charlie’s Lounge was where old drag queens went to die. To be fair, I didn’t know much about it at the time. I’d only stumbled in there a few times, usually after being at some other watering hole in the city, high on booze and youth, when someone would shout “LET’S GO TO AUNT FUCKING CHARLIE’S!” We’d make it in time to see a little of the drag show, stuff a couple bucks down a queen’s dress, and then get herded out the door into the post apocalyptic street war that is the Tenderloin at 2 am. It wasn’t until 2010, when I was shooting a sizzle reel for IFC, that I ceased viewing Aunt Charlie’s as a campy oddity and saw it for what it really is: a dive with more heart than most of the other bars in The City combined.

Now don’t get me wrong, Aunt Charlie’s Lounge is a campy oddity. It’s a rail-thin dive bar with cheap drinks, purposefully chintzy decorations, neon lights, and one of those arcade machines where you use the claw to win a stuffed animal. But it’s also home to some of the least ironic drag performances you’ll ever see. And for many years it’s where Vicki Marlane, “The Lady with the Liquid Spine,” would perform. Marlane was a legendary drag performer who, at the time of her death in 2011, was credited with being the oldest continually running transgender performer in the nation.

A sizzle reel is something that you shoot in order to get interest from a network to greenlight your show. It’s like a very short pilot, maybe ten minutes long. The one we shot in SF was specifically for IFC, and after seeing it they gave the go-ahead for us to make Young, Broke & Beautiful, the travel show I co-created and hosted in 2011. While there are a lot of great moments in the sizzle, the scene in Aunt Charlie’s is by far the best. After watching the girls perform, I ended up backstage interviewing them, and it was then that I realized how much heart they put into what they do. One girl talks about how she spends all her spare money on outfits for her performances. Then the interview moves onto Vicki Marlane, who tells the story of how she would perform as a woman anywhere they would let her. She danced as a “hoochie-coochie girl” in various bars and even traveled around the country in a carnival sideshow in the 1950s performing as the “Alligator Girl” (I think they covered her in glue) and was the third and fourth legs for the “Four Legged Woman.” Marlane eventually got gender reassignment surgery in the 70s or 80s, and if I remember this correctly, would throw a birthday party for her vagina every year on the anniversary of the surgery.

After interviewing Vicki Marlane and the other performers, I felt guilty about previously saying that Aunt Charlie’s was where old drag queens went to die. I was wholeheartedly wrong. It’s a place where people go who don’t just like to perform, they need to perform. This is their art form and their gift to the world, even if it just so happens that they do it in a perfectly dingy dive bar in the Tenderloin.

A month or two ago I was at Aunt Charlie’s for a fundraiser. There was free food, and drag performances, and some guy who had an incredible ability to win stuffed animals from the claw machine. The event was put on by the Harvey Milk LGBT Democratic Club to raise funds for and give momentum to their petition to name Aunt Charlie’s block after Vicki Marlane. Not only would it be in honor of one our most beloved transgender personalities, it would also be a salute to the Compton Cafeteria riot which happened on the same block, and predated Stonewall by three years. I really hope this street naming comes to fruition. I mean, what city in America would rename a street after somebody nicknamed “The Lady with the Liquid Spine”? Hopefully ours.