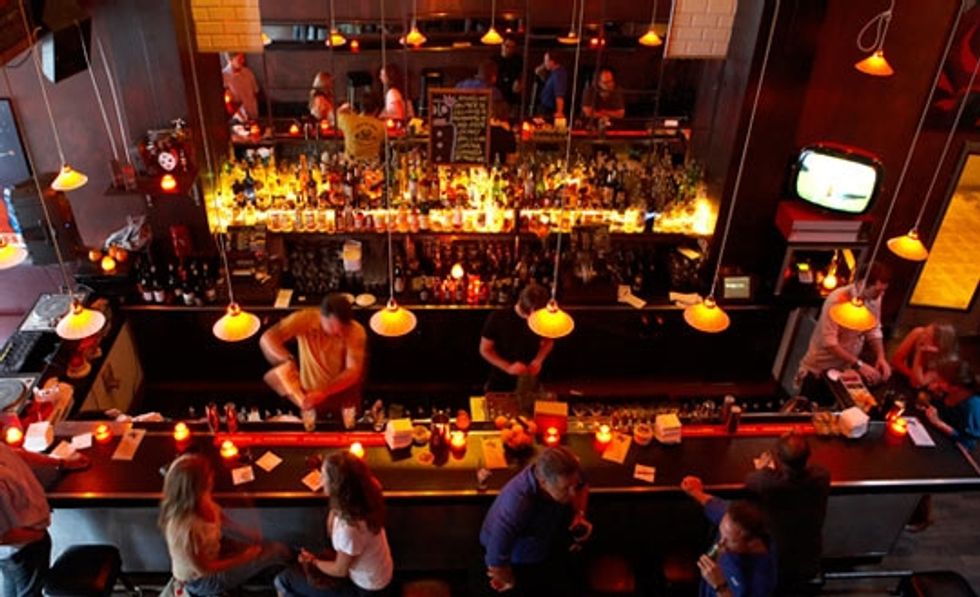 I once ran into the actor Jon Favreau at Laszlo. Well that’s not entirely true. I ran into him in the hallway that leads to the bathrooms shared by both Laszlo and Foreign Cinema. I had seen him the week before on Celebrity Jeopardy so I told him, “Out of all your work, I think you were best on Celebrity Jeopardy.” He thought it was funny, but not nearly as funny as I thought it was. This always seems to be the case.

I told this story a few Wednesday nights ago to my friend Ashley while we sat at Laszlo’s bar. She was sipping a gin drink whose name I’ll never remember while I had some kind of vodka/Campari cocktail called Mephisto, the coloring of which was reminiscent of the huge orange harvest moon I’d seen on the walk over. Sitting amongst the Soviet posters and Eastern Bloc iconography that decorates the Mission drinkery, we awaited the beginning of Good Times, a weekly party where vintage movies are played on the wall and DJs spin Soul music.

The bartender told us about a new trend he’d been noticing amongst service industry folks. Some of his coworkers at Laszlo and another bar had begun taking shots of Chartreuse followed by a chaser of root beer. The three of us discussed this strange combination and wondered if it might grow to the legendary status of what I call “The Real San Francisco Treat”, a shot of Fernet with a ginger ale back. The popularity of the fernet/ginger combination had started its meteoric rise in a similar manner (with bartenders and servers). Maybe we were observing the beginning of a huge new booze trend in San Francisco. Probably not.

I was at least four Mephistos deep at this point so I reasoned that we should order some food. One of the perks of Laszlo being connected to Foreign Cinema (other than running into Jon Favreau in the shared hallway) is that the restaurant’s entire menu is available to order. We shared a few appetizers, just enough to halt me from being way too wasted.

By the time we finished eating, the music was in full swing, but we were ready to move on. The night was young and so were we. Plus we had to spread the gospel of Chartreuse and root beer. As we left the bar I took one last look inside. Laszlo looked like the hybrid of a warehouse, a loft, and some interior designer’s Berliner fantasy. In reality it wasn’t any of them, but on a Wednesday night when the Soul music is pumping, the movies are playing, and the patrons quaffing harvest moon colored drinks, it could probably be anything you’d like.