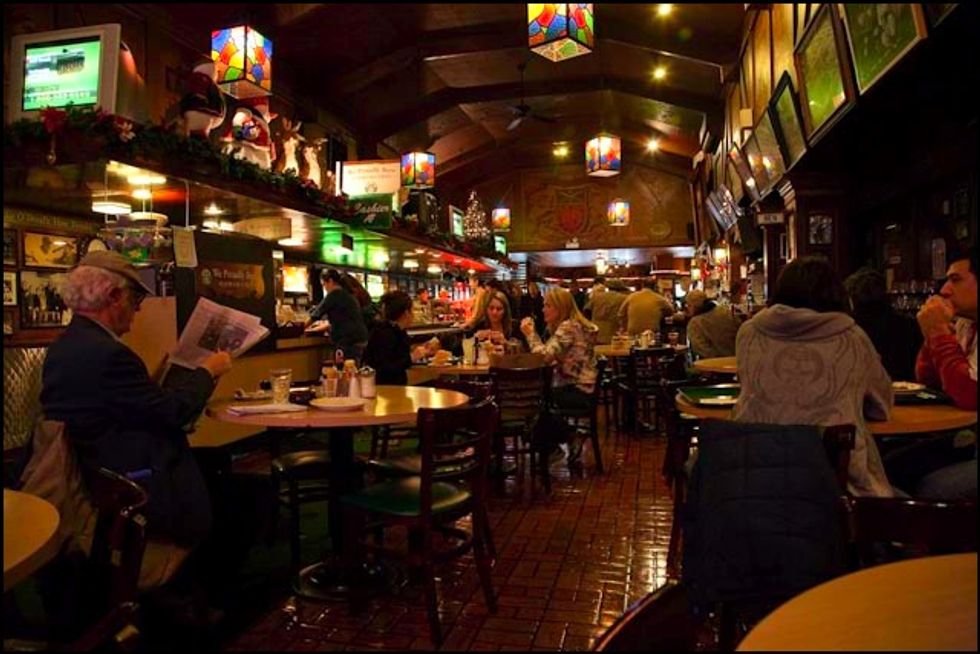 I still mourn the loss of the old Gold Dust Lounge. Every time I walk by the building I flip it off, knowing that an amazing piece of SF history was sacked so that Express could put in an escalator or dressing room or a rack of poorly made, overpriced, sweatshop clothing. Maybe that should be a thing we all do, like giving a high-five to Hopper’s Hands while running towards the Golden Gate Bridge or telling Frank Chu “Give ‘em hell Frank!” whenever we see him protesting the 12 Galaxies. We should all give Express the finger every time we pass by. Same goes for the Handlery Hotel, which is owned by Jon Handlery, the greedy guy who sold a piece of San Francisco out from under our feet. He also owns the building Lefty O’Doul’sis in, which makes me think we should work on getting it made a historical landmark before some other multinational corporation, that doesn’t give a fuck about San Francisco, decides to move in. Without places like Lefty O’Doul’s, downtown San Francisco is just a series of megabrand stores. It becomes interchangeable with Phoenix, or Houston, or ugh…fucking Walnut Creek. It stops being San Francisco, and just becomes like anywhere else.

Lefty O’Doul’s is not just like anywhere else. It’s so thoroughly San Francisco, that it defies classification. It’s not a sports bar or dive bar or piano bar or restaurant. It’s just Lefty’s, a spot where you can watch a game, have a drink, sing a song, and get a meal, all while feeling like true a San Franciscan, even if you’re not one. See, that’s part of what makes Lefty’s special–it’s one of the few places left in town where you can belly up to the bar and have a tourist from Europe on one side of you and a third-generation native San Franciscan on the other. It’s one of the few places left in town where, as locals, our snobbery gets left at the door and we don’t think “How did they know about this place?” because it’s Lefty’s O’Doul’s, and everyone knows Lefty’s.

Lefty O’Doul, the man, is a giant in the history of San Francisco sports. He was born in Butchertown (now Hunter’s Point), played Major League Baseball with the likes Babe Ruth, Ty Cobb, and Joe DiMaggio, had a lifetime batting average of fucking .349, managed the San Francisco Seals in the 40s and 50s, and is credited with bringing baseball to Japan. He opened his eponymous restaurant/bar in 1958 as a place “where friends and family could come to eat and meet with sports stars, creating a unique environment where everyone was family.” And it really is a unique environment. The walls are covered in memorabilia of San Francisco, baseball, and the combination of the two. Tourist families sit at tables eating the hofbrau-style grub while old-man drunks sit at the bar lamenting that Timmy hasn’t been able pitch for shit since he cut off his hair. A piano man tinkles away, while wasted tourists belt out “Sweet Caroline.” A waitress checks in on me and my dad to see if we need another round of beers while we each finish one of the best corn beef sandwiches in town. I love this bar, because I love San Francisco, and so should you. I mean, Lefty opened the bar for you and me, I think you owe it to him to stop in and have a drink.

PS: Have you visited the new Gold Dust Lounge yet? It’s worth going to Fisherman’s Wharf for.