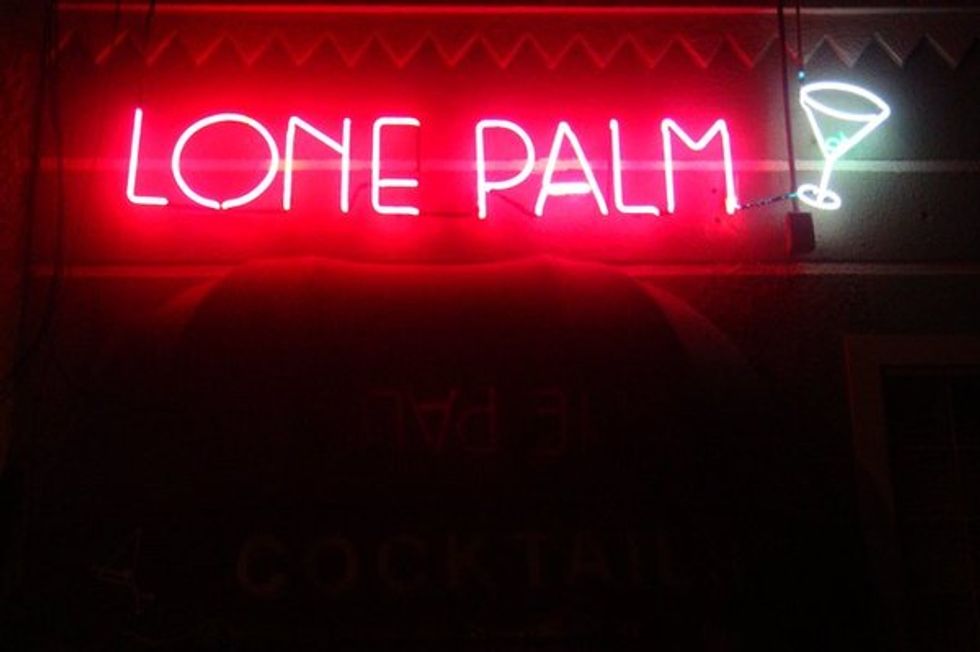 Weekends are for amateurs. Weeknights are for pros. That's why each week Stuart Schuffman will be exploring a different San Francisco bar, giving you the lowdown on how and where to do your weeknight right.  From the most creative cocktails to the best happy hours, Stuart's taking you along on his weeknight adventures into the heart of the City's nightlife. So, who wants a drink?

Somewhere there’s a photo of me and my ex-girlfriend in which she’s sitting on my lap and we’re very obviously in love. We’d just started dating, probably hadn’t even slept together, and you can tell just by the way we’re wrapped around one another that the brain chemicals which make you fall in love are absolutely fucking exploding in our heads. The photo was taken at the Lone Palm after the very first reading I ever did. I spent a lot of time at the Palm back then since it was a block from my house, and even though I rarely see the bar or my ex-girlfriend these days, I still love them both. Immensely.

I first got turned onto the Lone Palm when I moved to the Mission in 2004. My friend Jason had been living in the neighborhood for a number of years and once we got settled, he immediately took my roommates and I to the bar. Upon walking in and seeing the dark interior lit mostly by candles, streams of neon light, and a TV screen playing black & white movies, I knew I’d found my new haunt. Little bowls of goldfish crackers dotted the white cloths that covered the tables people were sitting around. They sat either in groups, talking and laughing about some private thing I'd never know about, or as couples gazing into each other’s eyes, sending out signals of love and lust over the rounded lips of their martini glasses. And then there were the regulars, the ones who make camp at the short end of the bar. The shit talkers and the fire starters who always see the bar as their own. There were the two Scotts, Max, Ashrav, and the Danish (maybe Swedish) girl whose name I can never remember, and more. Within a short time, my roommate JT would be among them as well. They’d all become a part of my life for those years I spent in drinking, drowning, laughing, yelling, wobbling, jabbering and whatever else you do when you’ve spent a few lifetimes at a bar a block from your apartment.

They say the Lone Palm is a good bar to take a date. I wouldn’t know. Taking a date to a bar where you’re a regular and your friends are too is a recipe for disaster. I could just see one of the Scott’s or JT telling my date that I had some unmentionable disease while I was in the bathroom, just to fuck with me. What can I say? My friends are assholes and I wouldn’t think twice about doing the same to them.

In my early and mid twenties, the Lone Palm was where we went to celebrate things, to drink in sorrow, and to make shit happen. So when I had my first public reading at Dog Eared Books, the most natural place to make merriment afterwards was the Palm. And it was there and then that Tobias took a photo of two people in the midst of falling deeply in love. Trapped in its art deco wonder at the corner of 22nd and Guerrero, The Lone Palm never seems to change, but I do. We all do. Love comes and goes, apartments are moved into and out of, and individual friendships bob up and down in importance throughout different parts of your life, but the Lone Palm is exactly the same as it was when I first walked through the doors all those lifetimes ago.