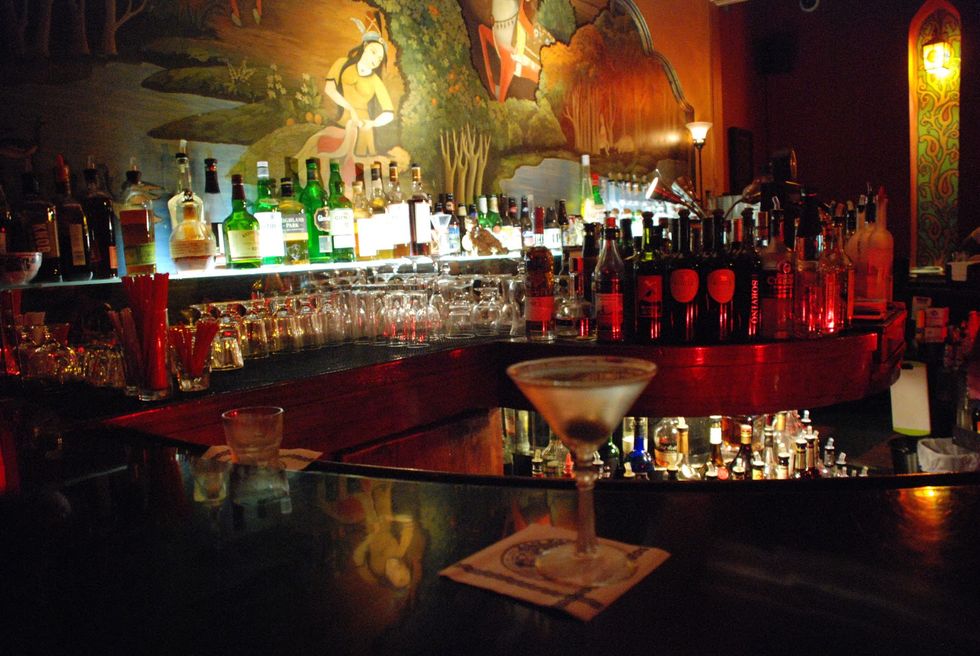 The Weeknighter: Superb Martinis and a Shot of Nostalgia at Aub Zam Zam

When I started this column over two years ago, I meant for it to be what it says in the intro. I told myself and my editor that I’d be doing things like talking about the most creative cocktails and the best happy hours in the city. Then I realized that I find that shit abysmally boring, and decided to do what I do best: tell stories about the places and people that make my life amazing, the ones who make San Francisco one of the most phenomenal cities in the world. By coincidence, The Weeknighter started around the same time the populace fully realized how out of control things were getting here. The city that so many of us had left our hearts in was suddenly leaving us behind. Like fickle Aztec gods, human hearts were no longer enough to appease the hills and buildings and fog and landlords we all lived amongst, between the ocean and the bay. So from the outset this column became, in its own way, a reverie or a meditation on what it meant to be in love with a place that was rapidly changing while so many people wanted it to stay the same.

The Weeknighter also became a way for me to exorcise some of the demons of my sticky and complicated personal life. I started the column around the same time I was ending a relationship of over five years. The words I wrote were always a series of little love poems to San Francisco. They just happened to be filtered through the din and dimness of bars on weeknights. And in these poems the daily tragedies and triumphs of my life spread out across the digital page. Heartbreak, lust, love, and friendship were stirred and shaken with barstools and benches, drunks, and neon signs. All of it topped off with nostalgia, sometimes even for the times we’re living through right now.

And in a way, Aub Zam Zam is the sum of all of this. Opened in 1941, Zam Zam has always been a place of nostalgia. I don’t know if the original owner ever visited the Middle East or North Africa, but the official name of the joint was Persian Aub Zam Zam and it looks straight out of the set of Casablanca. A rounded art deco bar takes up most of the front room while the oil painting behind the bar depicts the love story of King Khosrow and Princess Shirin. Even when it was built it was reminiscent of a different time and place, and that feeling has never left.

There’s a lot of mythology around Zam Zam and Bruno, the cat who owned it for 50 years until his death in 2000. The way the story goes is that, if Bruno didn’t like your attitude, or the way you looked, he’d kick you out and tell you to go drink at the Gold Cane. It seems more people got kicked out than were allowed to drink so the ones who managed to make it past Bruno’s misanthropy cherished Zam Zam as a personal safe haven and shrine. And it’s still a place to go to if you like a little abuse; my buddy Joe works there and you can tell that while he loves being a bartender, he doesn’t necessarily like people. Someone’s gotta keep it cranky at Zam Zam and Joe does so beautifully.

The Weeknighter is supposed to be a bar column, and Aub Zam Zam is a bar. That doesn’t mean I really care about the happy hour specials or what the best cocktails are. What I care about is that no matter what San Francisco is becoming, Zam Zam will always be a place beyond time, where nostalgia is the floater poured on top of every drink. It’s perfect for a drink with friends or for moping by yourself. It’s perfect for a first date or for a tipple on the way to your anniversary dinner. And it’s perfect for writing little love poems for the people and the city that sometimes break your heart.

I know I said I don’t care what the best cocktails are, but get a martini anyways. They are superb.