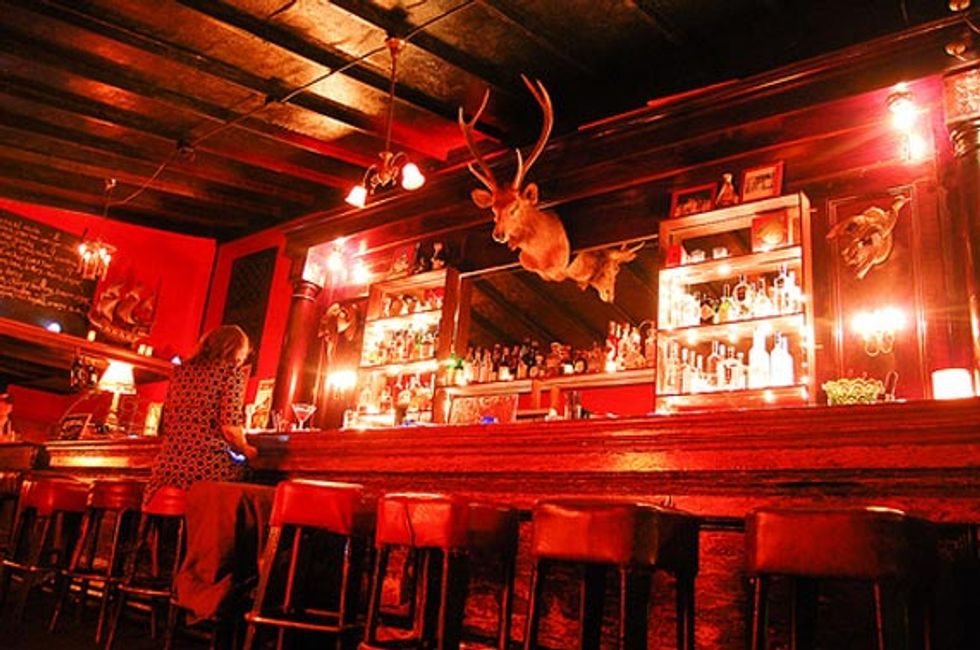 The Weeknighter: The Royal Cuckoo

It’s true what you’ve heard about The Royal Cuckoo. There’s a dude who is employed to play the organ. I dropped the ball on research and don’t know which nights he’s there, but it happens often enough. It’s also true that when the organ isn’t being played, vinyl records are. I think they’re all from 1975 or before, but please refer to the earlier sentence regarding me dropping the ball. But since feeling is more important than syntax (or in this case, hard facts), don’t pay attention to my ineptitudes; they’re not nearly as important as the great feel the Royal Cuckoo has.

Last night I sat in the dark bar, under the lamps, the taxidermy and the taxidermy that is a lamp (a pufferfish with a light bulb inside), absorbing both the atmosphere around me and the vodka soda in front of me. In the corner by the door was a cute couple snogging, while to my left there was what seemed to be a first date. The Royal Cuckoo was made for first dates. Kinda sexy and funky, with great drinks, this is the bar to bring someone when wanting to impress them with your knowledge of cool shit in The City. I wasn’t on a first date. I was waiting for a writer friend to show up so we could bitch about being writers, and discuss with wonder all the strange and powerful things that seem to be changing this city that we both love. Cities are like people in the sense that they can reinvent themselves multiple times throughout their lifespans. San Francisco seems to be doing that right now.

Take The Royal Cuckoo for example. It feels like it’s been around for decades, but it hasn’t. It’s been around for maybe a little over a year. Previously it was Belinda’s, a Latino after-work juke joint, and before that…who knows? Maybe 100 years ago it was exactly the kind of bar it is now, dark with dead things on the walls and a man playing an organ for tips. But since then the neighborhood has gone from a working class Irish neighborhood, to a working class Latino neighborhood, to what it is now: some hybrid mash-up working class/creative class/Latino/hipster neighborhood. Like The Royal Cuckoo itself, the neighborhood has a warm and inspiring feel to it. It’s just the thought of what the area’s next incarnation might be that had my friend and I worried.

Or so says the notes that I typed into my phone while drinking too many vodka sodas, hoping for the organ man to appear and wondering when the couple next to me was finally gonna start making out. The music man didn’t show and the couple never smooched, but then again it’s probably because I left too early. I had other places to be. But I’ll be back at The Royal Cuckoo soon. Maybe on a date, maybe for the tunes. Or maybe for a seat at the bar while I wait to see what San Francisco becomes next.