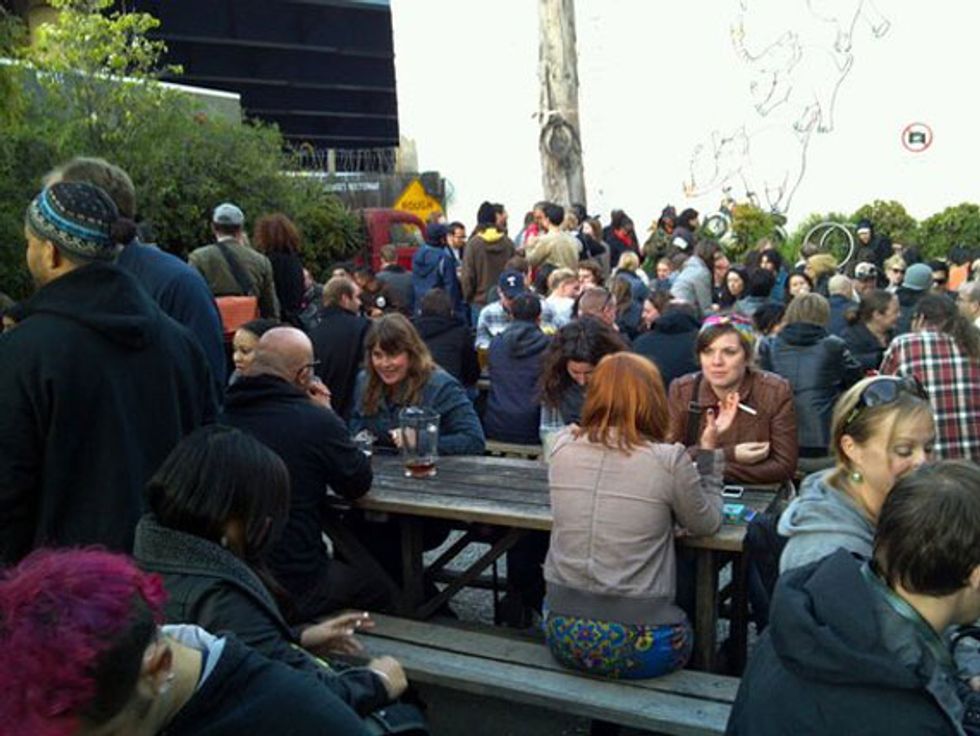 I first went to Zeitgeist in the summer of 2002. I had just moved to San Francisco and one of my roommates, a guy named Peter, poked his head into the room I was sharing with my friend Mani to see if we wanted to go. “It’s a really cool bar,” he said, “it’s got a huge outdoor area and a lot of bikers hang out there.” I don’t recall anything particularly exciting happening at the bar that night, but I could be wrong. Maybe it was the first time I saw the Tamale Lady, or maybe it was the first time I smoked weed at a bar. Who knows? What I do remember about that night though was walking back to the Haight, cutting behind Safeway to see the Wiggle Mural, and seeing a guy banging drugs into his arm. At the time there was no way I could’ve known how often San Francisco would subsequently offer up such glimpses of depravity. There’s also no way I could’ve known how often this fair city would lead me to Zeitgeist.

I’m not especially proud of the fact that I’ve been kicked out of a number of establishments in my lifetime (that’s an entirely different article anyways), but getting booted from Zeitgeist is an exception. It’s almost like a rite of passage in San Francisco, so much so that Ashley Harrell even wrote a story about it for the Bold Italic. One mustn’t be asked to leave the premises to have a quintessential SF experience though; simply sitting in that large backyard, amongst the riff-raff and the bike racks with a beer in hand, is also an important part of being San Franciscan.

Just as Peter insisted on taking Mani and I to Zeitgeist when we were green and new to The City, I always tell newcomers and visitors to put it at the top of their lists. There are very few bars that act as such cultural institutions the way Zeitgeist does. Any night you visit you’re almost guaranteed to see someone you know, whether it’s a person from your current life or someone from your past who’s just floating through town. And if you go on a nice day…well friend, that’s the stuff dreams are made of. When the sun is shining and the weather is warm (by SF standards anyways), there is almost no better place to be than Zeitgeist. The big walls out back block the wind making it the perfect refuge for you and your chums to commandeer a picnic table, get a pitcher of beer, and talk about all the things that have happened since last time you saw them.

If you’ve somehow never been before, here are some particulars you should know before going:

* The bartenders are notoriously gruff, especially if you look like you have yuppie-ish tendencies. Don’t get butt hurt about it. I’ve been going there for a decade and I think they’re just finally warming up to me.

* The Bloody Marys are some of the best in the city.

* The burgers are also some of the best in the city.

* No photos or video allowed.

* Yes, that is pot smoke that you smell.

* If you’re looking for the Tamale Lady, this is a good place to start. These days I think the tamales are $5, but the sage advice is still free.

* Did I mention the bartenders are gruff?