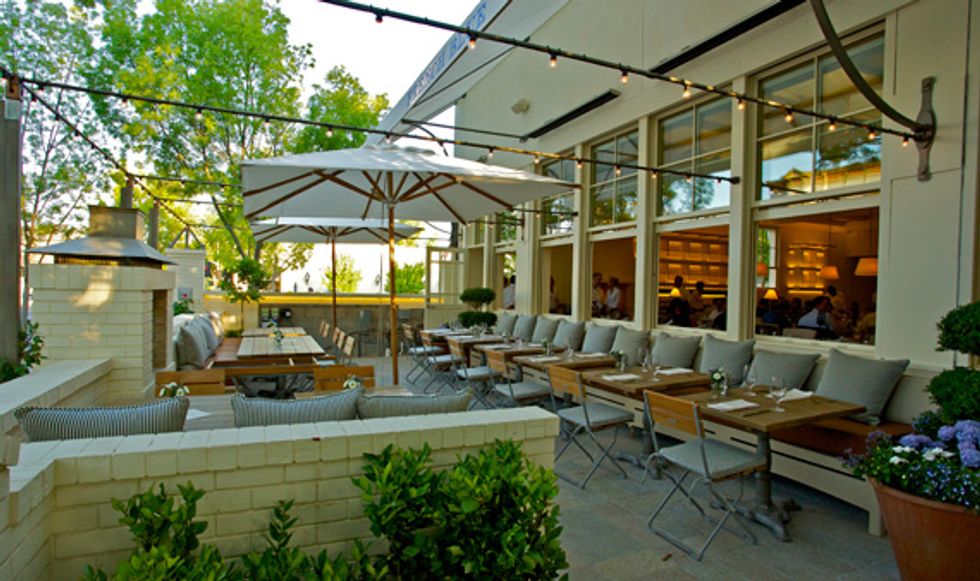 There Is No French Food at Napa's Locally Focused French Blue

There may be Francophiles speaking French while holding French poodles named Frenchie. There may even be French oak tables and men sporting French cuffs lounging in French wicker, but there is no French food at French Blue. Nor is there any French wine. At legendary Wine Country architect Howard Backen’s new restaurant, French Blue (which, in the design world, is actually a shade of blue — the very shade of the front doors that hung on the original Vanderbilt building) in the heart of Napa Valley, the focus is local, local, local. Two hundred miles around the town of St. Helena to be exact. Or, as Beverage Director Adam La Cagnina puts it, “from Monterey to Mendocino.”

Embracing the challenge to have an international wine list within a limited perimeter, La Cagnina, who, along with the entire management team, came from Teatro ZinZanni in San Francisco, sought out small producers making unusual varietals: Roussanne from Lake County, Gewurztraminer from Monterey, Sangiovese from Mendocino. (There’s even a Pinotage from Sonoma!) His other challenge: to match the price point of the food menu, which averages between $6-$18 for everything from fried olives to hangar steak (yes, yes, there are French fries). Fortunately, obscure varietals from lesser-known regions tend to be priced pretty fairly, resulting in a wine list that hovers in the $28-$56 range.  He also has four wines on tap at $8.50 a glass.

The wine list will mirror the food menu in other important ways too, like seasonality. For a restaurant that boasts a beautiful outdoor patio and a breezy, sun-drenched interior, it is only appropriate that the summer wine list be focused on crisp whites, rosés and lighter-bodied reds. Come fall, expect more hearty fare and along with it, richer wines.

As for cocktails, the list is sweet and simple, the drinks light and refreshing. Making good use of aperitif spirits like Cynar and Aperol (the Cynar Cocktail), liqueurs like crème de violette (with honey, lemon and botanical vodka it’s the Wild Flower) and plenty of fresh, muddled fruit (Strawberry Rhubarb Shrub and the Celery Collins), these cocktails, finished with a splash of soda, pair quite well with a sundress and floppy hat.

Starting on June 13th, French Blue will also serve breakfast (alas, no French toast) starting at 7 am. There are worse ways to start your day than with a ginger Champagne cocktail and a farm-fresh baked egg.

For more on the interior design visit California Home & Design, and for a behind-the-scenes look with architect Howard Backen visit Table to Grave.