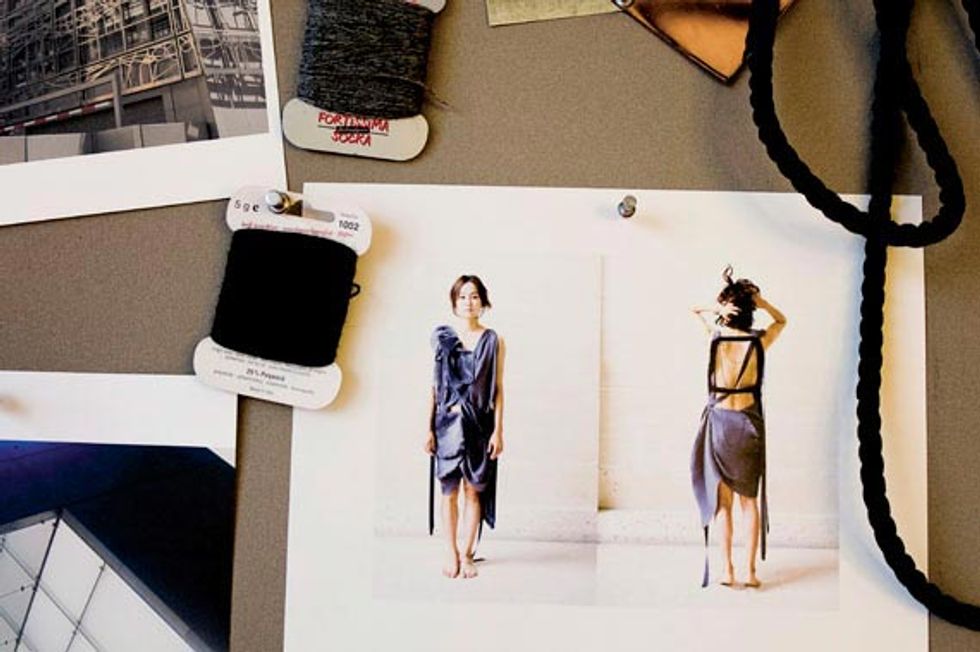 Paloma Von Broadley is dreaming of a move.  If things turn out the way she hopes, the 30-year-old Berkeley resident will soon relocate to San Francisco. “I’m  craving the city,” she says. Von Broadley’s enthusiasm about taking up residence on the other side of the bridge isn’t unusual, except for one key detail: She’s a budding fashion designer, and choosing San Francisco over NYC or LA is a big career gamble.

“Typically, people move to New York City or Los Angeles, but that’s exactly what I don’t want to do,” she explains. Besides, she’s already tried that. After graduating from California College of the Arts in 2009, she headed east for an internship with Badgley Mischka in New York. Having gained some industry know-how, she made her way back to the Bay Area to focus on creating a line of sustainable clothing. And where better to do that than in SF, where all things reclaimed, organic, and eco-friendly are placed on a pedestal. Today, Von Broadley designs architectural, eco-minded knits and earthy jewelry and has every intention of keeping shop in the Bay Area.

“We know we live in the best place on the planet. But young talent has to go where the jobs are,” says Roger Kase, a longtime fashion executive who rose from a job as a leather cutter in 1970s San Francisco to become president of Esprit Collection in the 1980s. (At the time, Esprit was among the most popular mall names in the country alongside Gap, Levi’s, and Jessica McClintock—all locally born brands.) And in fact, each year, a glut of graduates like Von Broadley emerge from Bay Area fashion-degree programs and quickly head elsewhere to work because of the lack of industry jobs here.

After all, there are only so many gigs at Levi’s and Gap. This brain drain is hardly the only challenge facing San Francisco’s fashion industry. While Kase recalls some 2,000 factories manufacturing wearable goods within city limits 20-plus years ago, that population has dwindled to a meager 200, give or take. “I’ve watched the dismantling of domestic production and the apparel industry,” says Kase, who now runs Isda & Co., a women’s clothing company headquartered in South Park.

That’s the bad news, but there’s a silver lining: Over the past six months, three fashion initiatives have sprouted with the promise to foster, mentor, and sometimes offer financial backing to designers and fashion-tech startups trying to make it big. Collectively, these programs are making City Hall, Silicon Valley, and a big-box Union Square retailer the latest stakeholders in the success of the city’s fashion future.

Starting this month, Macy’s Union Square welcomes the first group of designers-in-residence selected for Fashion Incubator San Francisco, a nonprofit program modeled after a similar incubator that launched at Macy’s Chicago in 2008. It will offer a year of business training, classes, and mentorship, plus a 3,500-square-foot space outfitted with sergers, stitch machines, cutting tables, and industrial irons. That’s welcome news for Von Broadley, who was chosen for the program in late January, along with Sabah Mansoor Husain, Bethany Meuleners, Justin Jamison, Tony Sananikone, and Tamara Jaric. The hope is that all six will exit the program next year and follow in the footsteps of their predecessors at the Chicago Fashion Incubator, which counts 16 of its 18 past residents as successful business owners today.

While Fashion Incubator SF aims to strengthen the business savvy of designers, a new accelerator program called Ahead of the Fashion gives emerging talent a chance to beef up their financial capital. Founded in September by former Gucci board member Enrico Beltramini, Ahead of the Fashion aims to support Bay Area companies that merge fashion and technology. The early success of startups such as Groupon and Gilt Groupe proves there is potential for serious money to be made with innovative tech retail models, and Beltramini says these new ways of connecting with consumers online has led to a resurgence of investor interest.

Ahead of the Fashion is attempting to bridge the gap between startups and necessary funding with a series of monthly events. Early stage companies seeking capital are given the chance to pitch startup-style to a panel of investors and industry experts. Later this year, the most promising companies will be chosen to officially join the six-month accelerator program, which hopes to offer access to advisers, investors, and strategic partnerships. The group’s first monthly event drew 250 attendees, many of them members of the Keirestsu Forum angel investor network, as well as former North Face CEO Hap Klopp.

“Fashion is an easy industry to get started in,” says Kase. “But it’s a difficult one in which to grow.” Upfront costs are high, and return on investment is a soft light at the end of a very long tunnel. Cash isn’t just helpful—it  is necessary.

The first label to benefit from Ahead of the Fashion is BlacMéra, a one-and-a-half-year-old purveyor of intricately hand-painted tunics. Having beat out the competition at the program’s debut event, BlacMéra’s designer Yuliana Candra may have found her reason to stay put in San Francisco rather than fleeing for another style mecca. “I self-funded the company, and I’ve hit my max,” she says. “It’s time for me to take on an investment.”

The City of San Francisco is also investing in the revival. In October, Mayor Ed Lee announced the launch of FashionSF, an economic development program to support local apparel manufacturing. Given the climate, it’s certainly a good idea: A resurgence of factories could create jobs, generate tax revenue, and foster an enterprising (and better-dressed) body politic. Under the initiative, Ellyn Parker, business development manager of the Office of Economic and Workforce Development’s fashion sector, is teaming up with industry professionals— Nice Collective’s Ian Hannula, CCA fashion design chair Amy Williams, Janet Lees of SFMade, and Kase among them. Together the group is working to address the challenges facing the city’s manufacturing industry.

Among the collective’s primary hurdles is the state of our city’s factories, many located in SoMa, which foresee rising rents and may soon be forced to relocate. Ironically, this is in part a consequence of the city’s efforts to revitalize Mid-Market by luring in big-budget companies—ahem, Twitter. FashionSF says the city could potentially fund a nonprofit partner to assist factory relocation to more affordable neighborhoods like Bayview and make the area more attractive for apparel workers. For example, a City Hall liaison wields enough power to improve things like street lighting and transportation so that workers would feel safer commuting to outlying areas—just one of the benefits for local workers that could be made possible by the mayor’s FashionSF initiative.

SF’s fashion sector may never be what it was 20 years ago, nor will it ever rival that of New York or LA, but it doesn’t have to. The Bay Area’s unusual mix of creative talent, technology, and ready capital mean we have a chance to make a unique mark. But momentum is key, says Kase. “I’m afraid of a slow build because I think the spark will fade,” he says. “What we need now is action.”