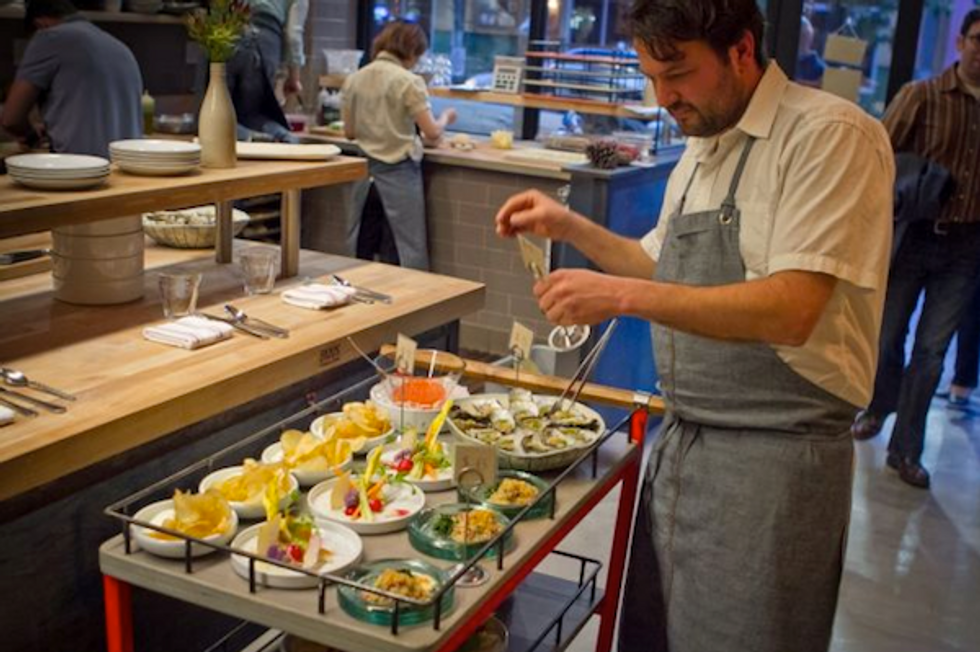 It's not unreasonable to say that nowhere else in the country are there so many menus that are in a constant state of flux as there are in San Francisco. Maybe it's because nowhere else do the talents and ambitions of local chefs combine with the huge, tempting array of farmers' market produce available in any given week, and these chefs just can't help themselves.

The advantages and disadvantages of ever-changing menus have been discussed often enough — mostly you'll hear complaints from diners who fall in love with something and just want to eat it again and again, which can be the chef equivalent of fans telling a band to play only their three radio hits over and over again. I wanted to talk to the chefs at three of San Francisco's most interesting and envelope-pushing neighborhood restaurants to see just how they keep things fresh and inspiring for themselves, how many new dishes they're creating in a given week, and what is the formula for a dish that sticks around permanently when almost everything else changes week to week.

Chef Matt Accarrino, who earned his first Michelin star at SPQR in 2012, adds five to seven new dishes to his menu each week, all depending on the season and what house-made pantry items he may be creating that month. "I just finished a pumpkin bottarga that took about a month to make, so in the next two weeks that will come into play," he says. "I also just [made] a batch of scarbuso — my own creation, a scarlet runner bean miso that I do with abalone."

On his Northern Italian-inflected dinner menu, typically consisting of about 30 items including a dozen different pastas, Accarrino only keeps a couple things as constants: the sweet carrot and lentil salad, and the basic format of his terrine-style lasagna which has seasonally changing variations. "I always say menu items have a life span. First they are new, then they're current, and finally they either become parts of new ideas for the immediate future or something I file away until they find a way to reinspire me."

At Bar Tartine there is a shorter but even more frequently transformed menu, with only three items that currently hold permanent spots: the smoked potatoes with ramp mayonnaise; the langos (fried potato bread); and the kale with rye, yogurt, and sunflower tahini. Co-chefs Nicholas Balla and Cortney Burns keep their kitchen on their toes changing anywhere between 10 and 20 dishes every week. "Most days we are completely changing or evolving at least a couple of dishes," Balla says. "We sometimes overwhelm ourselves and the staff by trying to change too much. But through experience we've learned to be able to recognize the days that are good for playing around and the days when it might lead to catastrophe."

State Bird Provisions has defined itself by the eclectic and ever-changing bevy of passed items that float through the dining room, dim sum-style, each night, typically numbering 17 to 20. On the menu there's also the list of a dozen "commandables," the items you can order to share that aren't passed around, like the spicy Dungeness crab kimchi yuba with smoked egg, and the restaurant's signature, namesake dish, the state bird (fried quail) with provisions (lemon-onion compote), which remains one of the best things on the menu.

Chef Stuart Brioza says the kitchen now adds or tweaks two to four items each week, with about 60 to 70 percent of the menu remaining constant each season, and he says many of the dishes they've created these past two years have stuck around for quite a while, some based on customer demand and some "because they have been instrumental in defining the type of restaurant we are." Brioza says, "Having a menu that has a good balance of dishes that keep folks coming back, as well as lure people in for the first time is smart and important for any restaurant."  But he says the kitchen staff, now numbering 12 with six of those people actively contributing dish ideas, now looks forward to the menu's seasonal changeovers because it helps them discover new flavors in dishes they may not have found the first time around they made them the year before. "I find the revisiting of a dish fascinating as many times, there will be subtle or extreme changes to the flavors based on palate growth and ideas that have evolved with the restaurant over the past year." In creating new dishes, he says it's State Bird Provisions' ethos to first look for "deliciousness" and quality of ingredients, second for balance in the flavors, and third for the element of "cleverness" and a bit of story to go with each one.

But, he says, having such a large and constantly evolving menu is not without its pitfalls for his staff. "Anytime a dish changes it creates a bit of chaos for that station, and takes that particular cook a few rounds of working the new plate to develop the right steps." And, he adds, "If too many dishes change at once, it is too chaotic and nothing seems to work right.  So, we don't do a full new menu for that reason, rather, we just flow and evolve.  Symbiotically, creativity and evolution [in a menu] can be really quite fascinating."