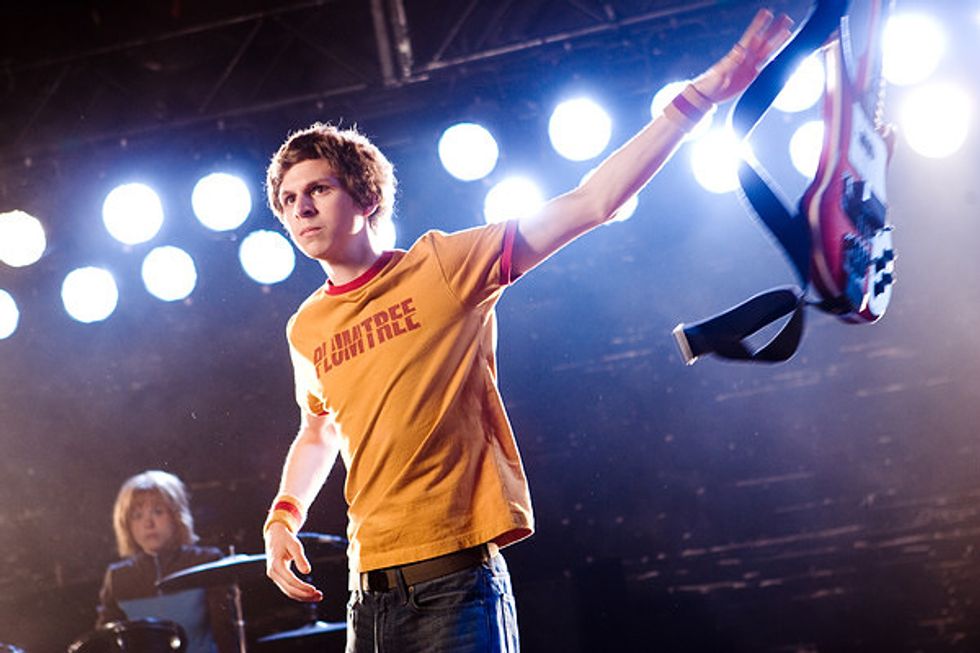 At 40, Simon Pegg is too old to play Scott Pilgrim, the painfully ordinary 22-year-old bassist of the fledgling garage-rock trio Sex Bob-omb. Still rebounding from a painful breakup – he’s the dumpee – Scott finds an effusive “Scottaholic” in high-schooler Knives Chau (Ellen Wong), who soothes his tattered ego but otherwise fails to engage him. For all his affectations, he’s an aimless schlub.

In other words, he’s a younger, leaner version of the working-class layabout played by Pegg in Edgar Wright’s 2004 feature debut, the riotous zombie comedy Shaun of the Dead. Pegg is livelier than Michael Cera, who plays Scott as a reluctant, deer-in-the-headlights hero in Wright’s latest, and one wonders how Scott Pilgrim might have played with a more adventurous lead.

As it is, the movie, adapted from Bryan Lee O’Malley’s graphic novels, isn’t wanting for energy. It is a bold, brilliant spectacle, an offbeat romance patterned after a Street Fighter-style video game. To earn the heart of his devastatingly unattainable dream girl, Ramona Flowers (Mary Elizabeth Winstead), Scott must battle her Seven Evil Exes, a small but persistent pack of snarling wolves.

By contrast, Scott is a lamb – life happens to him. Too passive to break up with Knives when Ramona humors his awkward overtures, he becomes aggressive only out of necessity. More often, he rolls with the punches.

Ramona’s vulpine exes are the embodiments of every guy’s insecurities – they are stronger, better looking and more successful, with the possible exception of Gideon (Jason Schwartzman), the reptilian scenester who probably has more in common with Scott than either would care to admit. (Not coincidentally, Gideon is the only ex with any lingering sway over Ramona.)

Does Scott deserve Ramona, much less Knives’ touching loyalty? Perhaps not, but for all his shortcomings, he invites the sympathy of anyone who has ever buckled beneath the weight of too much romantic baggage. He endures in spite of everything, and his emergence as the unlikely king of his surreal world is as much a rite of passage as a running gag.

Cera is, in some ways, a perfect fit – bewildered by the tests he is put to, but invigorated by his flirtation with manhood. As he did in January’s Youth in Revolt, the physically unimposing star eases into a more assertive role, empowered this time by hard-fought victories over Brandon Routh (Superman Returns) and Chris Evans (Fantastic Four). His timing remains impeccable, even if his range leaves something to be desired.

Wright, who co-wrote the screenplay, deftly makes light of the mismatches Scott faces, as do Scott’s sister (Anna Kendrick) and his sharply observant roommate (Kieran Culkin), who function as a sarcastic Greek chorus. Clueless though Scott may be, his friends, who’d rather watch him squirm than lend a helping hand, always know the score.

So do we, thanks to Wright, who tracks Scott’s progress with a scoreboard that roars to life with his furious fists. Wright, whose flair for the visual was evident in the gruesome deaths he staged so elaborately in the 2007 action spoof Hot Fuzz, takes his game to another level here, giving Scott’s adventures the innovative look and electrifying feel of a graphic novel brought to life.

His achievement isn’t unprecedented – Robert Rodriguz and Frank Miller pulled off a similar coup with Sin City (2005) – but never have we seen anything quite like Scott Pilgrim.

It is a movie fueled by the lunatic inspiration of the very best games and cartoons, awash with stylistic flourishes and exhilarating, animé-inspired skirmishes that reflect the director’s passion for both. The showdowns begin to grow tedious – we yearn for the seventh Evil Ex to arrive – but Wright’s spirit of invention is never fatigued.