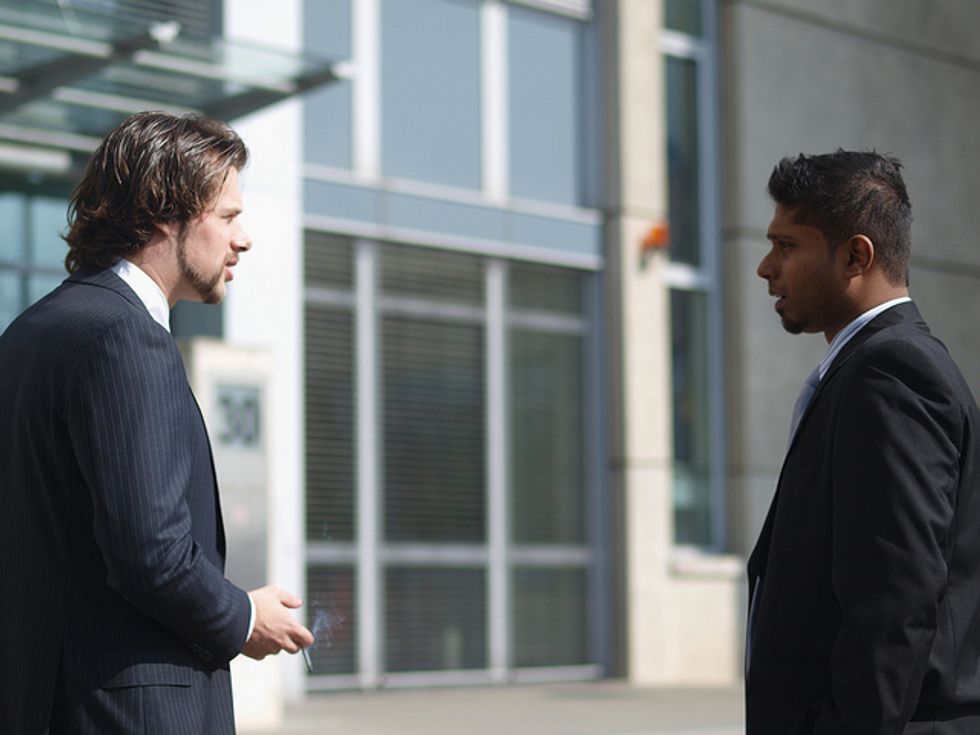 Two Sense: Is My Friend Gay?

I have a close, longtime male friend who has always been extremely secretive about his sexual identity. Most of our common acquaintances assume he's gay, and whenever I've tried to broach the issue directly, he seems to sense what I want to ask in advance, changing the topic before I can even ask. I don't really care one way or the other (I'm a straight male), but more than a decade later, not knowing feels like an uncomfortable gap in our friendship, which is otherwise a good one. It's also sometimes hard to ignore what others say about him, which is mostly idle gossip. Should I just resign myself to never knowing, or would it help our friendship to push harder for him to talk about it openly?

He Said: Remember Julia Sweeney's SNL character "Pat" from the '90s? The joke was that everyone went around trying to trick the androgynous character to tip off her gender, all to no avail. Lest you turn your friend into a kind of personal and professional laughing stock, you probably are going to have to respect his privacy. Make one, very direct, attempt the next time the issue comes up over a drink or relaxed meal. “You know that I love you, man, no matter whether you are gay, straight or just like to hang out at Folsom Street Fair.” If he doesn't take the bait, you'll have to let him open up at his own speed. Everyone's coming out process is different, and it's just the kind of thing he's going to have to discover on his own. But let me say this: On the basis of this note alone, you are a wonderful friend. If there were more non-gay men as sensitive as you, the world would be a better place for us all.

She Said: The situation calls for acceptance. It also causes us to challenge certain assumptions: that friends should tell each other about their sex lives, that anyone whose orientation is private or unknown must be gay, and even that closeted gay men (and women) should, at some point, “come out.” Of course they should, if they decide to. Obviously, your friend has decided not to. Or else he’s not gay, just extremely private. Or else he simply has little interest in sex or relationships altogether, and there’s quite literally nothing to tell. We don’t know. While I can understand how you feel that his silence around this very basic part of life hinders your closeness, I’m going to challenge you to attain another kind of closeness—the kind that springs from unconditional acceptance of a person as they are, right here and right now. Your friend must be well into his thirties by now, if not his forties. He’s a grown man, and if he wanted to discuss his sexual orientation with you, he would have. Instead, explore all the other wonderful parts of your friendship. It’s even possible he senses your discomfort with his silence. If you were to mentally wipe the topic off the slate, and relax more deeply into the friendship as is, he may even be more likely to share more with you at some point—not out of pressure, but organically, when and where he deems fit.

“He” is Chris Bull, author of seven books, editorial director of Queerty.com and cofounder ofGayCities.com.

“She” is Robin Rinaldi, 7x7’s former executive editor, currently at work on a memoir titled The Wild Oats Project.