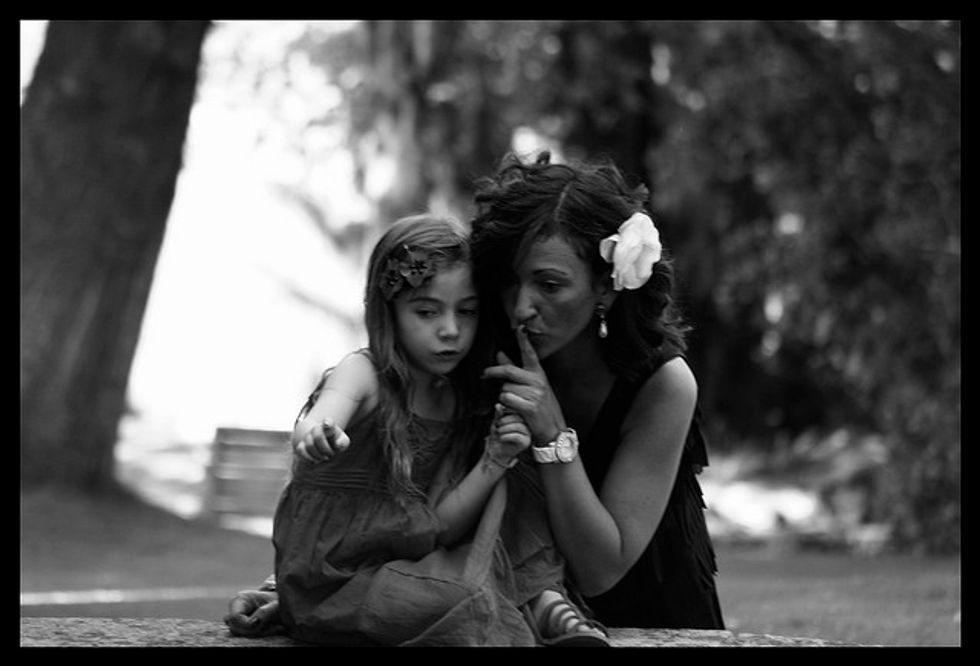 Two Sense: Mom Not Mum About Her Affair

My mother has always tried to be more my friend than a parent. Sometimes this is sweet, sometimes it's embarrassing, but lately it's become positively nauseating. She's started having an affair (and she's still married to my dad) and can't wait to tell me all the lurid details. I've told her I don't want to hear them but even after I threaten to tell my father—who’s been a wonderful husband to her—she keeps the stories coming. How do I deal with her? And should I really tell my dad?

He Said: When I hit 21, I started running into my dad in bars. He and his friends all had their side action on display; their wives evidently knew but didn't rock the marital boats. I was disgusted at first, told him he was wrong, and that I didn’t want any part of it. I even asked him to imagine how he would have felt if his father had cheated on his mother. But like your mom, he kept me current on his philandering. I’m not always sure why I do the things I do, so I hate to project other people’s motives, but I suspect parents want admiration or at least acceptance for what they are doing. You’ve told your mother how you feel, so just remove yourself from the conversation when she brings the subject up again. I wouldn’t tell your father though; if he doesn’t already know he’ll likely find out soon enough. Hearing it from you could make a painful situation worse.

She Said: I, too, have a story about a parent's infidelity. When I was 3, my dad and I were at a car wash. While his '64 Oldsmobile was getting cleaned, he took me into a pay phone, called someone named Patty, and wished her happy birthday. Though I was a small girl with barely a trace of consciousness, his tone of voice didn't escape me. When we got home I promptly walked up to my mother and asked, "Who's Patty? Daddy called her and said happy birthday." A big, well-deserved fight ensued.

You don't say how old you are—I'm assuming you're well past 18 and out of your parents' house—but still, their marriage is not entirely their own. You're part and parcel of it. True, you're all adults and your mother has the right to do what she will, but there's no way in hell she should be sharing her affair with you or any of her children. That's what friends are for, and honestly, in your mother's case, what therapists are for—not only because she's cheating on her husband but because she obviously lacks even the most basic boundaries. And for her to continue in this vein even after you ask her to stop is narcissism beyond the pale.

Whether or not you tell your father depends entirely on how you feel in your gut. Do you want to tell him? Then do. Would you rather keep your distance and let him deal with it on his own? That's fine too. As for your mother, the next time she brings up the subject of her lover, either hang up the phone or walk out of the room. Repeat as many times as necessary until she gets the hint. Believe me, she will. Actions speak about 100 times louder than words. Good luck with her—you're going to need it.