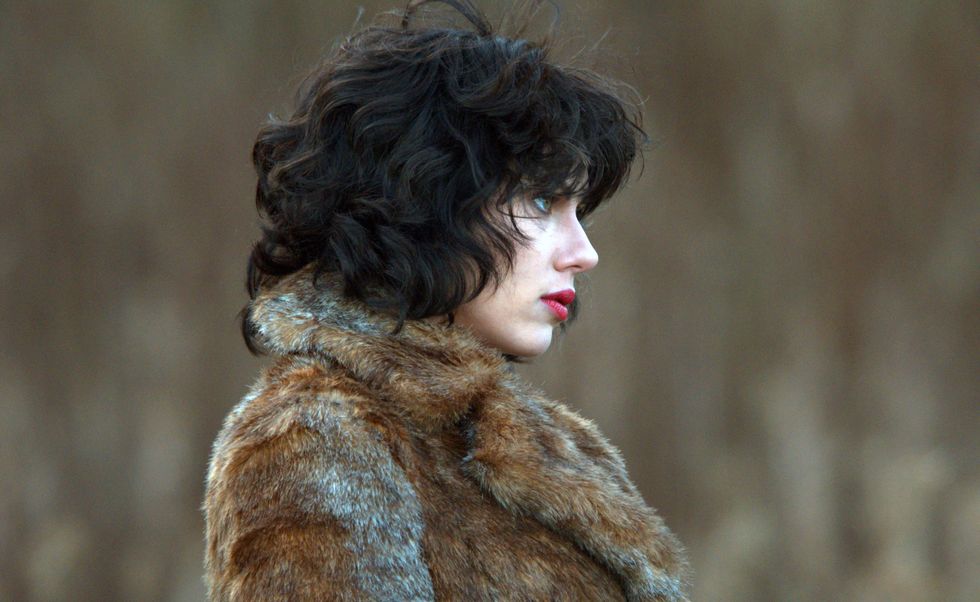 Under the Skin + 5 More Films to Watch this Week

Scarlett Johansson is an alien – it would conveniently explain her unwavering allegiance to SodaStream. In the new film from Jonathan Glazer (Sexy Beast), Under the Skin, however, this revelation provides no explanation or comfort at all.

Glazer is a director profoundly in touch with the uncanny: his previous film, Birth, was about a child who claimed to be a middle-aged woman's reincarnated husband. Under the Skin, before anything else, is a marvel of nerve and disturbance. Laura (Johansson), an alien reluctantly borrowing the skin of a human or perhaps reusing that of her predecessor, drives about dreary Scotland in a white truck, picking up men under innocuous pretenses and peppering them with a spectrum of questions while flirting with a quizzical half-smile. Once she's established that no one will miss them, she invites them to follow her into a dark house, luring them with a strip tease into the darkness. As they follow her, they gamely disrobe and wade deeper and deeper into some type of black oil, eyes only on her, until they are consumed. Eventually she meets one unique young man who stirs something within her and she lets him escape, and thus begins a journey into actual "humanity," with all the vulnerability and confusion that entails.

Most of the men Johansson picked up were not informed until afterward that they were being filmed, so their in-car reactions are nervously natural – or as natural as anyone would be if a movie star picked them up on a cold Glasgow corner. The naturalism of these interactions resonates eerily with the scenes of consumption – choreographed, audacious vFX spectacles that could have come from last year's bizarre sci-fi throwback Beyond the Black Rainbow. Now in limited release, Under the Skin has had an enthusiast response for an art film, grossing larger numbers than Scarlett's other big movie this weekend, Captain America per screen. Critics, mostly, have enjoyed it – such a sparse film can be a delight for them as it affords a variety of readings (a more adventurous and intriguing one has it as an emotional explanation of rape culture to men)--with many touting it as a singular triumph.

Of course, singularity in art is part myth, part farce. To say a work is "like nothing you've ever seen before" usually means you haven't looked hard enough. While Glazer has created something uniquely uncanny that will appear new to many, Under the Skin wears its influences on it's skin, so to speak, and they are myriad: the plot in broad strokes treads the same ground as Species; the darkened scenes in which Johansson devours her prey drip with the disconnected spectacle of modern dance; her eventual "humanization" and the film's fixation with the eye allude to Nicolas Roeg’s classic sci-fi The Man Who Fell to Earth; the predator/tracker dynamic of Laura and her motorcycle riding minder mirrors Claire Denis' similarly arty horror Trouble Every Day; and the brilliant SFX could be traced to any number of 70s classics. What Glazer has done is packed them into a tiny pill that can be swallowed by modern audiences. So far, they're taking it down with great pleasure--with or without the help of a concession stand-size soda. Sundance Kabuki and Century 9. Rotten Tomatoes: 84%.

This true crime tale of a couple that moved to the Galapagos to get away from it all, only to be tailed by a crew of eccentrics has more twists than your average thriller, and it's twice as exciting. Embarcadero Cinema. Rotten Tomatoes: 70%.

This socially conscious fest returns for it's tenth year with a slate of great new films and selections you may have missed at other fests. Highlights include Albino doc In the Shadow of the Sun, SFIFF highlight Tall as the Baobob Tree, and fascinating North Korean prison doc Camp 14, which features some chilling animations. Runs April 10-27, YBCA Screening Room.

SF's Arab Film Festival presents the second in its series of international shorts at the Roxie. Wednesday only, Roxie.

Since finding over 100,000 photographs by this reclusive unknown at an auction, historian John Maloof has made it his mission to have her remembered to history as a great talent. This detective tale follows his discovery of the woman who might be the greatest street photographer America has never seen. Embarcadero Cinemas. Rotten Tomatoes: 94%.