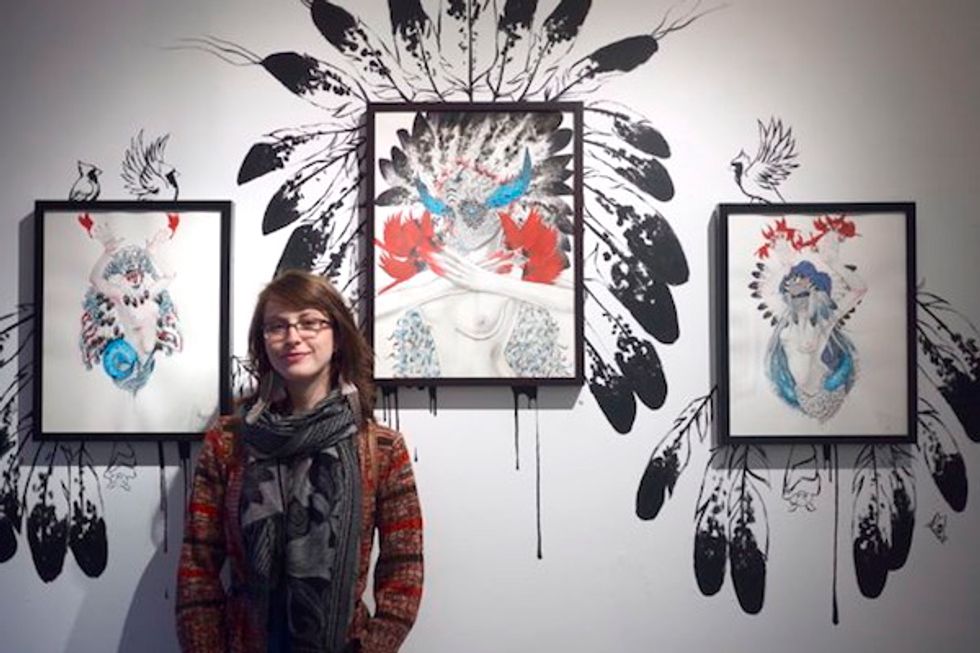 May I suggest Undressed — the latest Public Works Pop-Up Gallery show — as a stealth date idea? Through May 11, the Mission art/music/creative space is hosting their most provocative exhibit yet.  With fleshy works by local artists, what stood out were the elaborate, bust-baring Native American supernatural creatures by Chelsea Brown.

Brown's Native American influence is strong. The petite artist, in her Navajo garb and feather earrings, dresses (and obsesses) the part. “I find their culture fascinating, and in a lot of ways superior to modern culture today. Nature is revered as a life giver — the Native Americans recognized their ultimate dependence upon it. This concept informs my work in Undressed as well; the women draw their power from nature and are able to thrive on it. I joked that at this point, we humans should probably stop what we're doing, get naked, and have an elaborate bison-worshipping fire dance ceremony immediately. But seriously, we should.”

I told Brown I want her to paint one of my walls. Her work spreads beyond the canvas onto the surrounding white. Feathers, drips, bats, and birds extended the stylish spirituality. “The figures in my drawings for Undressed are based on supernatural beings, so I wanted my installation to look like a shrine. In Native American culture, feathers represent a connection to the spiritual world; an idea based on a bird's ability to fly to the Native Americans' concept of heaven. So I surrounded my pieces with feathers to suggest that idea.” Feather hair extensions? Feather art? Birds of a feather flock together...

The center piece -- the most stunning -- was based on the Lakota myth of the White Buffalo Calf Woman, who was a supreme 'spirit' or 'deity' in their culture. Get ready to get schooled: “This is no minor myth. The Lakota tradition treats her like the Messiah. She is supposed to be an impossibly beautiful woman who possesses supernatural powers beyond compare, and unsurpassable wisdom. The Myth says that one day she approached two hunters. Out of lust and slight disrespect, one hunter approached her and proposed they become husband and wife. The woman immediately summoned the power of lightening and turned him to a smoking pile of ash. The second hunter saw this and decided to do what She said, which was to gather his tribe and heed her teachings. After a lot of ceremony, the White Buffalo Calf Woman brought the Lakota tobacco, and the ability to harness its magical powers. The myth ends with Her leaving, and upon her departure turning into a white buffalo. In Lakota culture, a white buffalo is the most sacred animal, and an extremely lucky sight."


You can catch Chelsea next at Project One Gallery starting May 19.

Samantha Durbin is a lifestyle writer who honed her blogging skills as Editor of FabSugar.com. Samantha graduated from The Fashion Institute of Technology, also writes for San Francisco magazine and shares her musings via her poly-blog network, led by SFonFire.