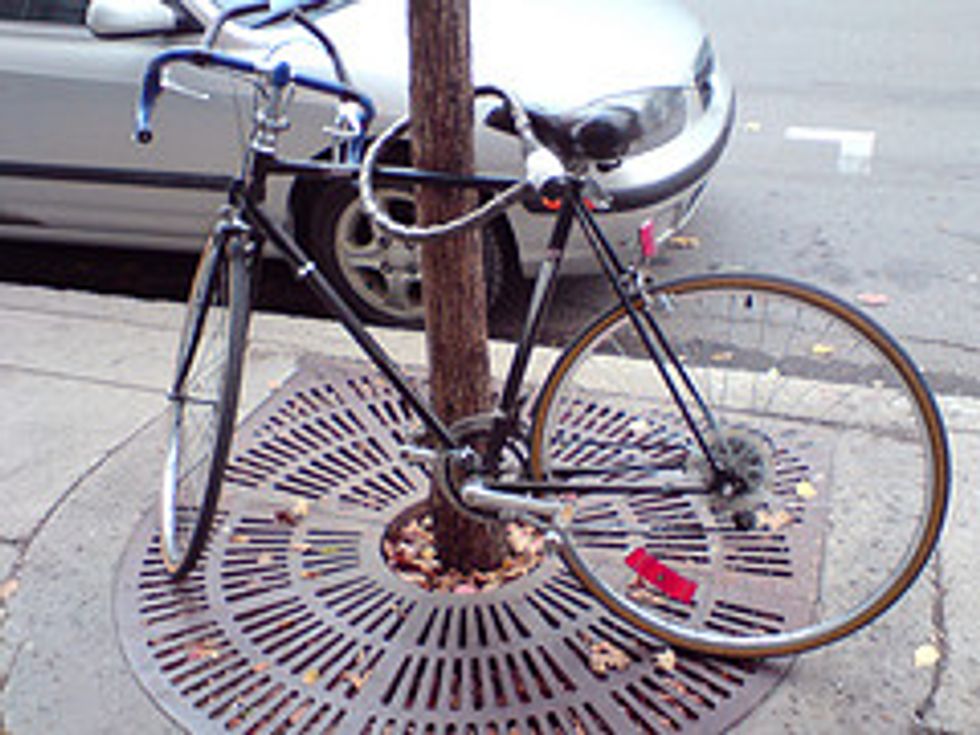 I could tell you that I started riding my bike to work because I wanted to save the planet. But really, it was an article in The New York Times Style section. (My significant other swears I will do anything if it appears in The New York Times Style section. However, I have yet to take up shower-skipping-as-fashion-statement, a concept that appeared in an issue this past fall.) This story featured a number of stylish young women from Brooklyn (where else?) who managed to turn bicycling into a catwalk-worthy event. These two-wheeled fashionistas could be found pedaling their vintage cruisers across the five boroughs in Prada skirts, bibbed sweaters, and kitten heels. Studying the photographs of these excruciatingly chic women whizzing through NYC traffic sans helmets, I desperately wanted to be one of them, despite the fact that my closet contained not one of the aforementioned items of clothing. And that I was somewhat fuzzy on the definition of a kitten heel.

Nevertheless, the following morning, I pumped up the tires of my granny-geared bike—because SF is hillier than all five New York boroughs put together. I pulled on an Athleta yoga skirt, which, while not Prada, does possess its own stretchy style, and opted for my usual SF footwear: cowboy boots. Thanks to the pointy toes, they turned out to be surprisingly easy for navigating toe clips. Following the example of the chic young Brooklynites, I also chose to ride sans helmet, a decision I amended after two days, realizing that a massive head injury is very difficult to render stylish.

Before I ventured out from my Glen Park house, I did one quick bit of cheating. Using Bike Mapper, I typed in the address of my office at the SF Writers Grotto and then clicked on the “flattest bike-friendly path” option. In about five seconds, I had a map and a written route to my destination.

It began on that nice, wide bike lane that recently sprung up on Valencia Street, a street I tend to avoid in my car because of the turtle-like pace. But on two wheels, the pace is more jackrabbit-like. As I was preparing to stop at the light at 18th Street (already?), I remembered that Bi-Rite, easily the world’s greatest grocery store, was right up the block. I hadn’t been there in five years, not since I’d moved out of the neighborhood and decided it was too much trouble to park. The next thing I knew, I was signaling left—at least I think that’s what I was doing with my arm out—and pedaling toward Guerrero Street and Tartine, which I also hadn’t been to in five years.

Fifteen minutes later, I was stashing a still-warm croissant from Tartine and a Vietnamese pork sandwich from Bi-Rite into my bike bag and heading back to Valencia. A block later I discovered Monument, a vintage furniture store with everything required to fulfill my most elaborate Don Draper/Peggy Olson fantasy and finally figured out where Four Barrel, my favorite caffeine delivery system, had opened their much-talked-about outpost. I never would have encountered any of this on my usual car-centric commute.

In another 15 minutes, I sailed past my usual SoMa parking lot, which every week up until then had relieved me of the equivalent of dinner in an exceedingly nice restaurant. And then I was at my office. All told, it took me 25 minutes door-to-door, allowing for the croissant-pork-sandwich detour—about the same amount of time it takes to drive.

The next day, on my way home, I remembered that Pizzeria Delfina is on that same block of 18th Street, and after locking my bike to the rack out front and jaunting in (at the admittedly early hour of 5 p.m.), I found out that their crust is as perfectly thin and crispy as I’d imagined all those times when I dared not venture there for fear of parking.

The following week, after somebody reminded me about the Tuesday Ferry Building farmers market that I always skipped because it’s too far to walk during my lunch break and because the parking lot charges me twice if I move my car, I found out that it takes only six minutes to ride my bike there from the Writers Grotto. And that I can eat something meaty and grilled from Prather Ranch while I sit looking at the water. And that you can fit a lot of heirloom tomatoes into a bike bag.

The week after that, when that group of writers who are fond of gathering in North Beach for a monthly roundtable lunch sent me my invitation, I didn’t hesitate to RSVP in the affirmative. I didn’t leave my office any more than 15 minutes before I was due at our usual table at Capp’s Corner. As I locked my bike to the parking meter out front, I had an epiphany (because writerly types are fond of them). I realized that there were entire sections of San Francisco—shops, restaurants, and whole neighborhoods—that I’d loved and exiled myself from simply because it was too much trouble to park. But now that I was riding my bike, I was gradually taking them all back.

This was a year ago, and I’ve been riding my bike pretty regularly since. I’ve learned some things from my time on two wheels. For instance, contrary to what I’d imagined, there is no universal brotherhood (or sisterhood) of cyclists. That cool-looking woman with the dreads and the handmade bike is not going to become my new pal just because we both own a Timbuk2 bag. And a person on a bicycle is just as likely to cut you off as a person in an SUV or Prius.

The best thing that’s come out of taking up cycling is getting my city back. I’m the first to admit this isn’t the most environmentally conscious reason to pull out a two-wheeler, but it is less embarrassing than pretending to be a Prada-wearing Brooklynite in a pair of kitten heels.

Janis Cooke Newman is the author of the memoir The Russian Word for Snow and novel Mary. She is currently at work on a new novel about the Irish War of Independence, 1940s radio serial dramas, Hitler’s rise to power, 9/11, Prohibition in New York City, anti-Semitism in America, and Captain Midnight’s Secret Squadron.

*This was article was originally printed in the August issue of 7x7 Magazine, on newsstands now. Subscribe here.