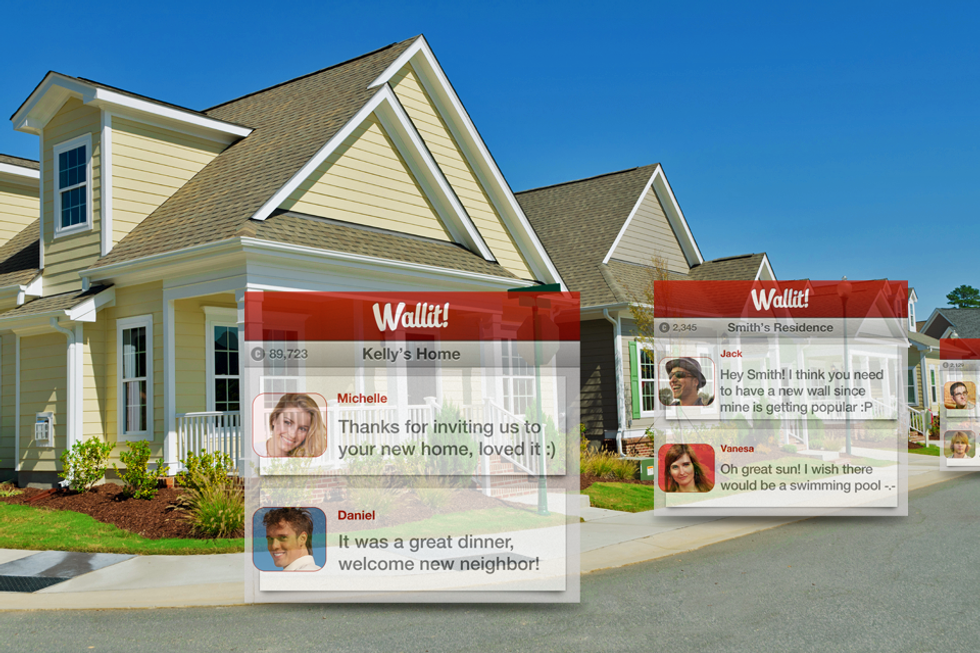 “Imagine a virtual wall,” Veysel Berk suggested in a coffee shop the other day. “It’s like a physical wall that you can write on or post a picture to if you are at that location. Others can see it in real time and as long as they are nearby, they can post to the wall too.”

Berk is the founder and CEO of Wallit, a geo-social app that connects people to places through multi-media messages on these augmented reality (AR) walls.

He pulled out his iPhone, tapped on the app, tilted the phone sideways to access the AR mode, and created a wall right in the coffee shop where we were meeting.

“Since these walls will be persistent over time, but the people visiting them are constantly changing, they will represent the cumulative human experience at that location,” Berk explained. “It will therefore exhibit the character of that location.”

When the app launched in March, it was with 700 virtual pre-loaded walls all over the world, many at iconic locations like Eiffel Tower and the Golden Gate Bridge.

“Immediately, people contacted us, and said ‘we want to create our own virtual walls anywhere we go,’" said Berk. “We got thousands of these requests to open it up.”

So open it up they did, and as of earlier this month, anyone can create a Wallit anywhere.

Berk, a post-doc researcher at UC Berkeley, relies on his science background in establishing how Wallit works.

“We want the best walls to persist over time, so we came up with a Darwinian solution. How does nature solve similar problems? With natural selection. So if a wall is not visited in 15 days, it will die.”

Wallit’s algorithm determines the rest. There are two important factors as to which walls persist – who creates them (those with a larger social graph rank higher), and the richness of the content posted to the walls.

“In this way, our community is determining which walls thrive and which die,” Berk explains. "Just as favorable traits in the environment stay; unfavorable traits die. It’s the same idea here.”

Just a few weeks after opening the app up so users can create their own walls, some of the user-generated walls have surpassed the originals in popularity. There have also been some surprises.

The constraint requiring users to be at a location to be able to post there led to the creation of a new location called Planet Earth. Anyone can post to this wall – as long as they are on earth.

Wallit has some interesting future options for business models. You can well imagine virtual billboards placed strategically beside popular walls at places like the Golden Gate Bridge, for brands to interact with visitors in real time.

The company also has created walls inside every one of Starbucks’ 15,000 stores. This is called a “Superwall,” and if Starbucks wants to interact with people using the app in its stores, again in real time, it will have to pay a subscription fee to do so.

Other businesses and groups have approached the company, including a major fragrance brand, and the U.S. Olympics Committee.

With thousands of new walls being created every week all over the world (40 percent of them overseas), Wallit is rapidly building a very large collection of AR content.

Anticipating the arrival of the Google X glasses next year, Berk says “we will be a major source of AR content to Google, potentially with millions of walls.”

Most of the users are Millennials at this point; in other words the basic iPhone demographic. The app is only available in iOS for now, although an android version is in the works.

The company’s staff of ten is located in Skydeck, a rent-free building on the Berkeley campus with other startups. This is part of the university’s effort to foster a more entrepreneurial culture, a la Stanford’s.

As for one of the more creative walls coming soon, it sounds like there will be one on the Moon. Anyone on earth (or the moon, presumably) could post it.