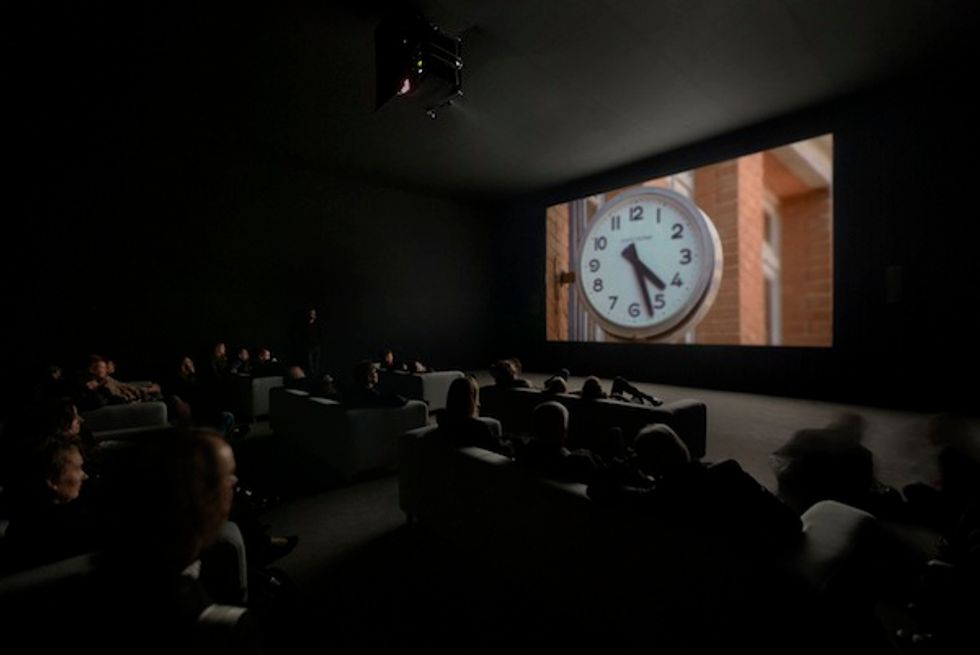 There are 1,440 minutes in a day, and several times that many clips in The Clock, Christian Marclay's epic, 24-hour-long video collage of film segments that each in some way reference an exact time of day, drawn out to align with real time.

The product of an almost unthinkably tedious, 3-year process of collecting and editing, The Clock has paid off, proving a smash hit since debuting at London's White Cube gallery in 2010 and establishing Marclay as a sort of art world version of mashup artist Girl Talk.

Now the colossal work arrives at SFMOMA – a fitting exhibition to count down to the museum's impending three year closure, which goes into effect June 2.

To accommodate The Clock, SFMOMA converted an entire exhibition area into an enormous black box. Lined with several dozen Ikea couches, the space falls somewhere between museum and movie theater, which is wonderfully pleasant – once you're in. However, the museum warns visitors to expect substantial lines for the piece, as space is limited and, at past exhibitions, people have been known to settle in for very, very long viewing sessions (for true die-hards, SFMOMA will be offering a smattering of 24-hour viewing periods during the month of May).

Worth it? You bet. But manage your expectations: This is still one of the more overhyped art works of recent years.

Of course, The Clock is impressive at a sheer technical level. Marclay seamlessly sutures the clips together, drawing the sound or music from one into the next to fuse their moods, producing a mesmerizing cinematic frankenstein that, though in theory should be boring, is in fact exceedingly difficult to tear oneself away from. Indeed, despite the fact that the work literally reminds the audience of the time at a constant rate, it is eerily easy to lose track.

I viewed The Clock  for an hour and a half, the length of a feature length film, and it felt like fifteen minutes. Who knows how long I could have stayed, if – and this rings deep, at least at a surface level – I had the time to do so.

The Clock is interesting in this and a host of other ways. Still, to insist that it will be a "transformative experience" for all viewers, as the SFMOMA curators adamantly did, feels a little hyperbolic. At the very least, it will not be a waste of your time.


The Clock runs through June 2 at SFMOMA, 151 Third Street