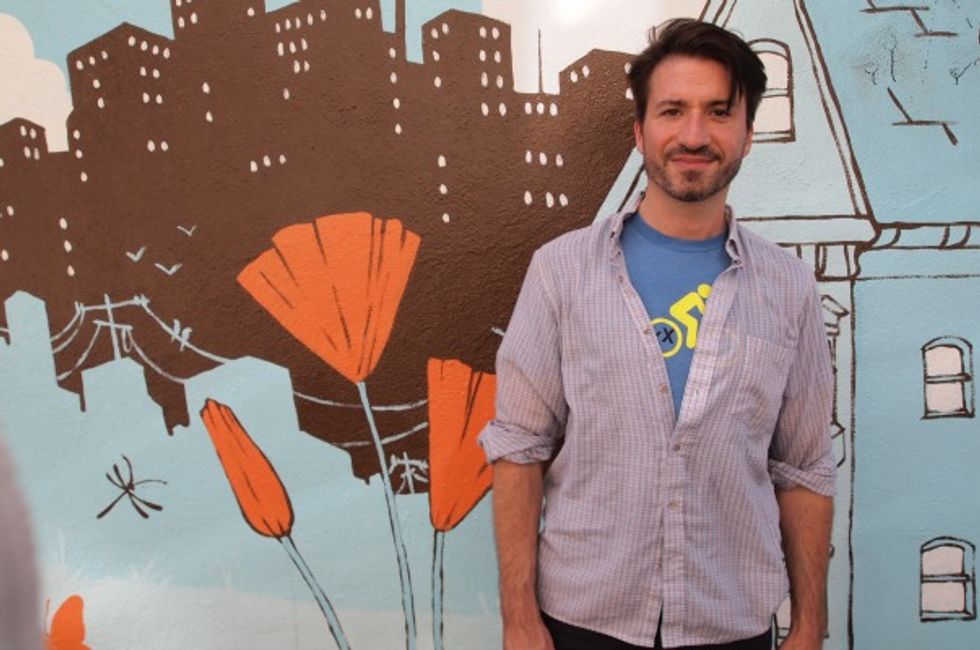 We Wanna Be Friends With Actor Liam Vincent

Twenty years after heading to San Francisco with dreams of becoming a stage actor, Liam Vincent has it made. "Having smart people who want to work with you is way more gratifying and challenging than playing the father of a girl who's hot but is also a mummy on the CW," he says. "Not that it wouldn't be a blast to get paid a lot of money to play a werewolf's dad. But I don't think I'd be excited about that the way I'm excited about what I'm doing now."

Fresh off three shows at the California Shakespeare Theater (their artistic director Jon Moscone says "Liam is probably the funniest person I know, and even if he weren’t extremely talented and smart, and more committed to the work than most anyone I know, I’d still cast him"), Liam's preparing to take on the world premiere of award-winning playwright Peter Sinn Nachtrieb's The Totaliarians, which is running at San Francisco's Z Space from November 19-December 14 (tickets are available here).

Liam plays Jeffrey, a doctor, in the dark comedy about modern political discourse. "I get to perform a colon exam on stage," Liam says proudly, hastening to add that there's more to his character then that bottom line. "Peter understands that passive-aggressive people can be their own toxic trap, and he illustrates that in a very funny way."

A full-time, working actor for well over a decade, Liam was drawn to San Francisco after a difficult ten months in New York. "I realized that I didn't want to bartend all night, then get up and go to an audition for All My Children." With friends already in the area, SF struck Liam as a good place to approach his career from a different angle. Upon his arrival in 1994, Liam got a job waiting tables in a restaurant in the Haight, "and a couple years later I took the risk of giving up that day job and acting full-time." He never looked back.

Though San Francisco is certainly harder to crack now than it was 20 years ago, Liam still believes that all is not lost for young artists who want to come here. "If you're hungry, you can find a way to make it work. That's what your 20s are for, right?"

"That said, I'm a natural optimist. My glass is half-full in a way that I hope is not disassociative. But that's what's gotten me through, and into a career as a professional actor, even in strange times like the ones we live in now."

1. What neighborhood do you currently call home? Would you ever move or are you happy in your hood?

I've been in Mission/Noe Valley for the past ten years. I love it — I actually live on a small street that I stalked for months before finding an apartment on it. Considering Mark Zuckerburg moved in a block away from me, this neighborhood is obviously no longer a secret. I rent, and have a great landlord (who I hope is reading this and never evicts me).

2. What's your hands-down, absolute favorite thing to eat in SF?

The roast beef sandwich at The Sycamore.

3. What's your perfect night on the town?

Because I work late and I am a night owl, a perfect night for me is meeting up post-show with my partner Ian and some of our close friends at a low-key bar with a great juke box (the more White Stripes albums, the better).

4. When you need a low-key afternoon, where do you go for down time?

I am huge fan of acupuncture. I was skeptical at first, but I find that it has been really helpful both with injuries and relieving stress. I will often drop into San Francisco Community Acupuncture on Valencia.

5. What's your favorite place to go on a day trip from the city?

Santa Cruz. I spent three summers at Shakespeare Santa Cruz when I first moved to the Bay Area. Coming from the East Coast, it's what you picture as a California beach town. I love the boardwalk and mini-golf at Neptune's Kingdom. And I love that it's walkable.

BiRite or Mitchell's:  Mitchell's — even though BiRite is close to my house, I have never had their ice cream. There are a few things I refuse to wait in line for, and ice cream is on that list. Along with brunch.

7. Three words that describe your life in SF?