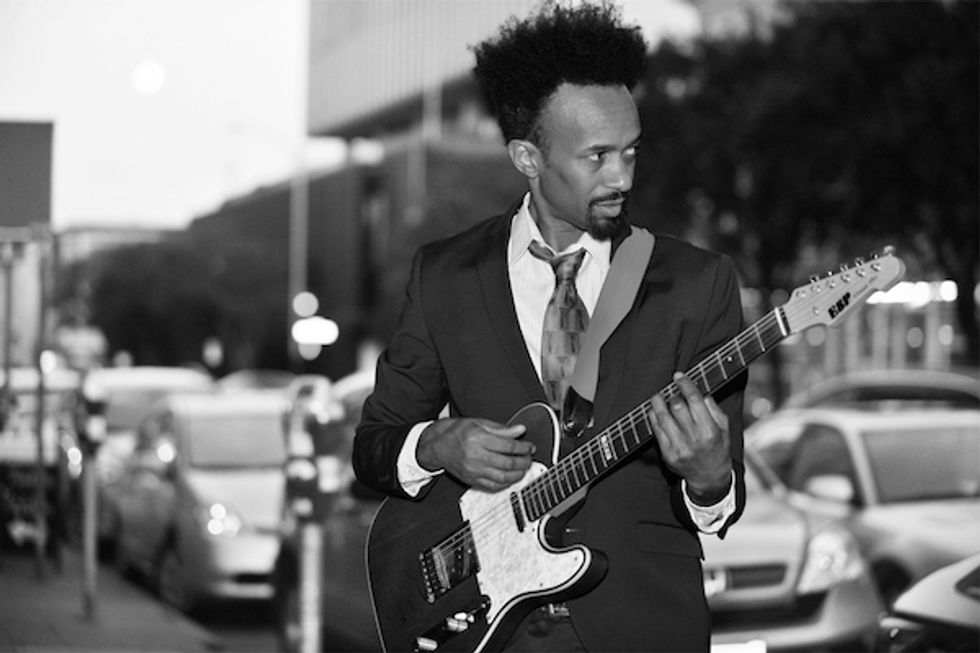 We Wanna Be Friends With Blues Singer Fantastic Negrito

Brush up on Oakland favorite Fantastic Negrito, who takes the stage at Outside Lands on Saturday, Aug. 8 at 2:55pm.

Fantastic Negrito describes his life as a series of trials and rebirths. And in his current incarnation, the blues singer can pack a room. He moved to Oakland when he was 12 and was awed by the music scene. He taught himself to play every instrument he could, and eventually signed a record deal under his first name, Xavier. The experience was so disenchanting, to put it mildly, that he quit music altogether. Years later, a near-death car accident, his marriage, and the birth of his son awakened him to make music once more.

Today, he sings with an intensity and urgency born of his experiences. Recently, Fantastic Negrito was chosen out of thousands of entries to win NPR’s Tiny Desk Contest. On Saturday, Aug. 8, he takes the stage at Outside Lands.

7x7: What does it mean to you to perform music and speak in the Bay Area—especially today?

FN: Having grown up here, it means everything. Because I grew up at a time when the music scene was explosive. There were such influential artists that had an impact on the music scene. There was such rich blues here. So it means a lot. Because you know that you’re playing behind these greats who came here and paved the way. It’s a lot to live up to in a heritage and culture of music and creativity that must be upheld and achieved.

FN: The blues experience in America is one of hardship, but it's one of creating music to express these hardships. It’s the antidote to depression. Blues, spiritualists, we have a history in this country. People weren’t treated fairly—my ancestors. Blues is a way of coping with that. One is able to express how they feel about no chance of equity in this society….And in the modern context, I sing about my life. Of being a black man, to be honest. I feel that we live a different life in this country. There’s something about hearing it. But the interesting thing is that it’s music for everybody—blues is surrounded by all of this diversity.

7x7: What is your favorite thing to do on weekends here?

FN: You can go to El Cerrito. You can go to San Jose. The North Bay is beautiful, the nature, extremely gorgeous. So what I love the most about the Bay Area is the diversity. Amongst people, musically, culturally, geographically. It's just amazing.

7x7: What’s your hands-down, absolute favorite thing to eat in the Bay Area?

FN: Oh gosh. I have to say I like sushi. The real stuff, not the fancy rolls. I like mackerel, yellowtail. Straight up, right out the water. No soy sauce, just raw.

7x7: What’s your perfect night on the town?

FN: I like Third Fridays. Second Saturdays. Third Thursdays. They’re actually better than First Fridays because the businesses are opening up their doors and letting their fans come and play. I sometimes organize them and have an art show, live painting—a great, interesting time. You come out, get something to eat, listen to great African music, hip-hop music, folk music, whatever. It's very eclectic. Representative of the Bay Area. Coming together under the flag of a good time.

7x7: When you need a low-key afternoon, where do you go for down time?

FN: I’d say getting on the bus with my six-year-old and riding all of the buses and trains that we can and eating all the food in the different neighborhoods—Taiwanese food and African food.

The Fox or the Fillmore?

You’re going to make me pick?! I gotta pick the Fox because that’s Oakland.

Three words that describe your life in the Bay Area?