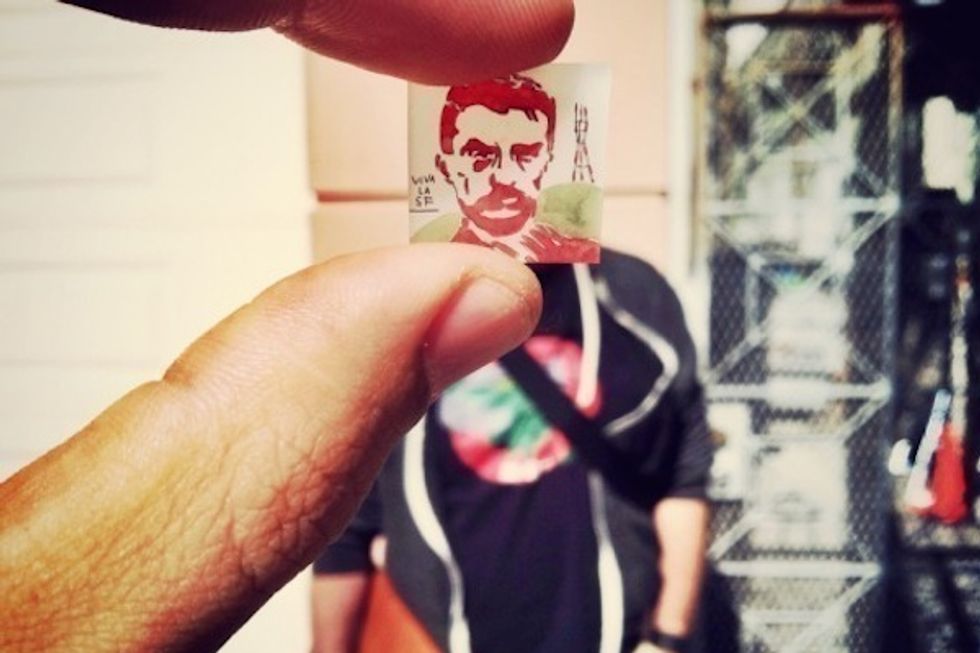 We Wanna Be Friends With Burrito Justice

Prolific and popular tweeter, noted burrito champion, and brander of the La Lengua neighborhood (the flat, southern-most section of the Mission between 24th and 30th Streets), Burrito Justice is who you should be reading for updates on the San Francisco lifestyle, maps, burrito tête-à-têtes, and more. Before catching him in person at the "Bikes to Books" poster event at Bender's on Thursday night, get to know him a wee bit better.

What inspired your name?

San Francisco passed a bylaw banning food trucks within 1500 feet of schools. This enraged me because we had the El Tonayense food truck at our wedding rehearsal dinner. I made this map and that was that.

How has SF influenced you?

More like how it hasn't influenced me. I know my neighborhood and my neighbors better than anywhere else I've ever lived. I blame this all on Allan Hough who, back in 2007, told me to blog instead of just commenting on Mission Mission.

The area needed a name. Kind of the Mission, beside Noe, below Bernal, but definitely not the Outer Mission. The names SoCha or Transmission were meh. La Lengua worked. (Side note: The number of times I've been accused of being a real estate agent is pretty funny, though.)

Burrito. (No seriously, I respond to that now. Also, my daughter loves her nickname, Taquita.)

Running after my kids in Dolores Park or down Herons Head or atop Bernal.

What’s your hands-down, absolute favorite thing to eat in SF?

I love burritos, but I eat far fewer than you'd expect. A slice at Pi Bar or or an Italian sausage at Rosamunde plus a Blind Pig is pretty damn awesome. But my most recent traditional sit-down meal was at Al's Place — pretty amazing.

I am pretty fond of the FolsomLadies.

Where would you go for a night out on the town?

Wait, I have three kids... is this a trick question? Ideally, a show at Great American Music Hall or the Independent.

Where do you go for down time?

My backyard, or Rock Bar.

The people and being able to walk or BART to pretty much anything I need. And Cole Hardware. Man, do I love Cole Hardware. Great music. Happiest damn store on the planet.

My friends having to leave SF because we as a city can't figure out reasonable rent and housing prices. Golden handcuffs.

Favorite burrito and why?

OK fine, Brock, since I've known you for so long I will make an exception: It all depends on the ingredients. El Gran Taco Loco for pollo asado and El Castillito for al pastor. Fortunately, we live in a city where, by and large, the taqueria that's closest to you is probably pretty damn good. I just hope the taqueros and taquerias who make your burritos can afford to live in SF. I'm not optimistic and I fear we are at peak burrito / golden burrito. Our children will weep at our songs of burritos past.

Muni. (OMG do I have Stockholm syndrome?)

Three words that describe SF to you: