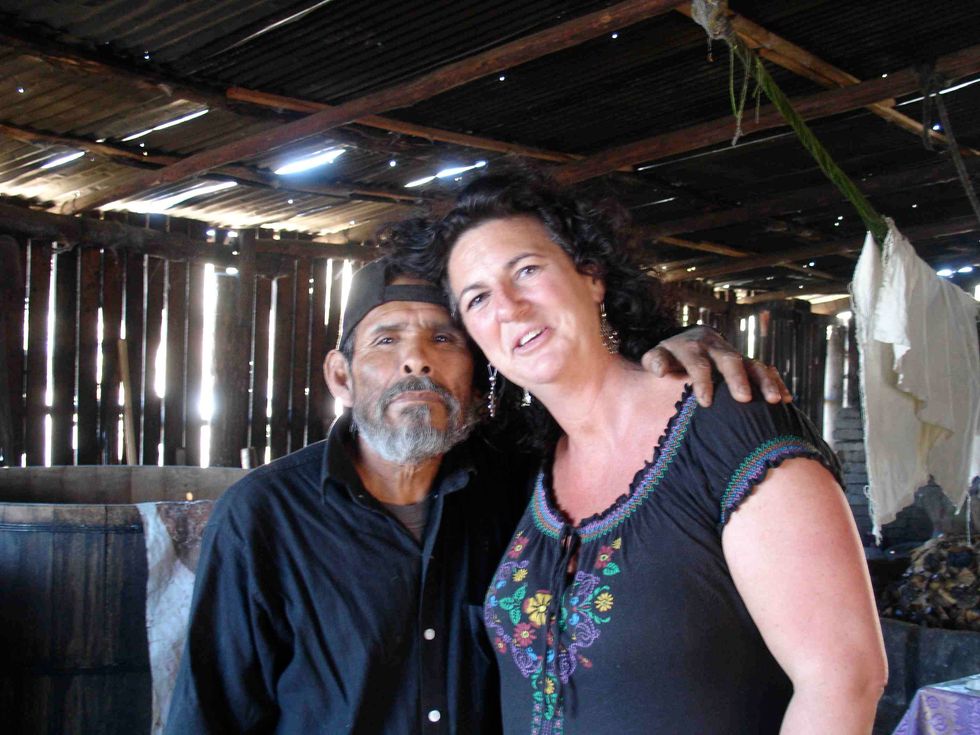 We Wanna Be Friends With Susan Coss, Founder of Mezcal Week

Susan Coss likes to discover delicious things. The hunt for interesting flavors is what brought her to Oaxaca for the first time in 2003, to celebrate Dia de los Muertos and to explore the food scene. And although her first encounter with mezcal was “pretty terrible and overwhelmingly smoky,” her subsequent tastes of the distinct Mexican liquor turned her into an obsessive connoisseur.

Twelve years later, Coss is directing the very first Mezcal Week, which kicked off on Sunday, and is putting on the second annual Mezcal: Mexico in a Bottle event this weekend at Public Works. We sat down with the mezcal advocate—who has also worked with CUESA and Eat Real Fest— to chat about her upcoming events, favorite drinks, and life in the Bay Area.

7x7: What inspired you to launch Mezcal Week?

SC: We wanted to grow the event we launched in 2014, Mezcal: Mexico in a Bottle. I was sitting with a friend at a bar, brainstorming what would feel like an authentic way to expand it. We believe in presenting mezcal as part of a bigger story, as part of the culture of Mexico. So my friend Elianna said, “you should have a whole week of mezcal like they do with SF Beer Week.” And thus the crazy idea was born.

7x7: What are you most looking forward to?

SC: It's hard to choose. There are more than 30 restaurants and bars participating for the week. At the grand tasting event, we are going to have not only some great mezcal brands, but also a few special items like fresh pulque, a fermented agave drink, and food and cocktail pairings from some really innovative restaurants. And then, of course, we have some very special and rare mezcals that you can’t get outside of Mexico, including one mezcal from a female mezcal maker (mezcalera!).

7x7: Where should we go to drink mezcal in the Bay Area?

SC: I am pretty excited by the selection that Calavera in Oakland has, and I think Prizefighter in Emeryville does an amazing job in how it presents mezcal. In San Francisco, I very much appreciate ABV and Loló.

7x7: What should consumers know when seeking out mezcal?

SC: They should know that good bottle of mezcal will cost at least $50. There are a couple of exceptions, but for the most part, it’s true. There are also different kinds of mezcals: the most common is made from a maguey or an agave varietal called espadin. It’s common because it can be cultivated. Then there are a whole host of “wild” maguey mezcals with names like madre cuishe, tobala, arroqueño, etc. These mezcals cost more, and they should, because of how they are harvested, and how rare, and disappearing they are.

7x7: Have mezcal, will travel?

SC: Everytime I go to Oaxaca something amazing happens. One time it was a party in a pueblo that went on and on, and the mezcal flowed and well, I found myself in a room gambling with the guys who worked the palenque (distillery) and leaving with about eight bottles of mezcal. Another time, I visited a female mezcal maker at her ranchito. I some of the most amazing mole ever.

SC: Impossible to say. I was just in Mexico City where I had a mezcal that had been distilled with lemongrass and ginger that was pretty amazing. And, at my house, I have an espadin from a mezcalero in the state of Guerrero that is pretty rocking.

SC: Mezcal makes sushi and ceviche even more interesting, and there is nothing like BBQ to go with a bold mezcal. I am really interested in playing around with Indian food and seeing how it pairs with curries.

Cocktail or straight up: Straight up

Dream vacation: Cruising the Pan American Highway or driving the entire perimeter of Italy with a detour to Sicily

Person you’d love to have a drink with: Eduardo Galeano

Favorite book: The Great Gatsby or The Savage Detective

Last meal: Maryland crab cakes from Baltimore’s Lexington Market, a quesadilla with epazote and squash blossoms from Oaxaca, and the mussel tamales from the ladies who sell them on the beach at Chacahua. And my grandmother’s fried chicken with her pan gravy.