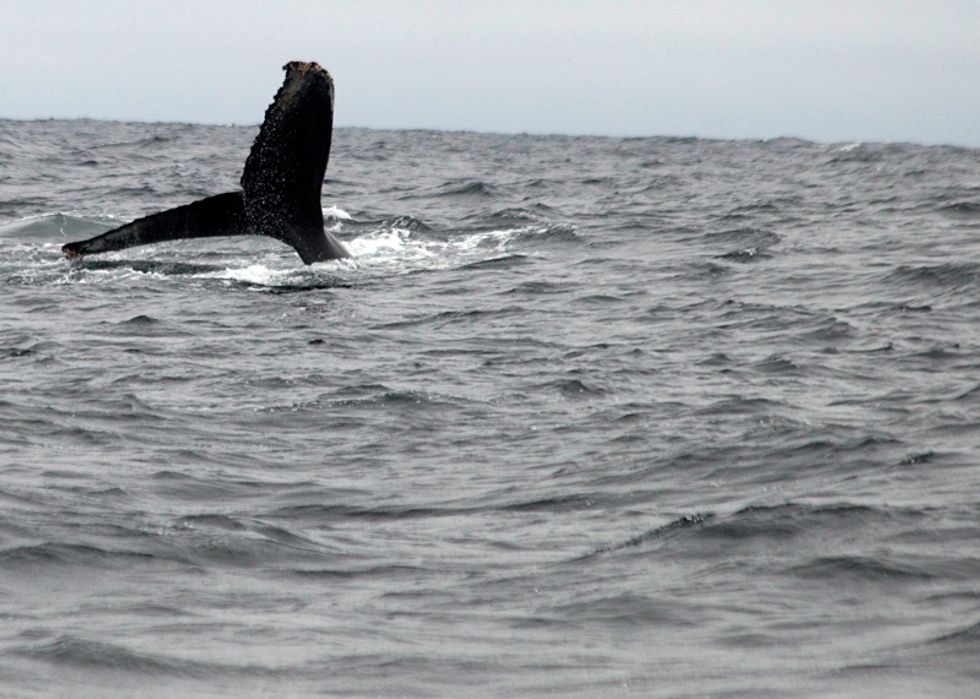 Whale Watching in the Farallon Islands

July through October is prime whale watching season here. It's when the Humpbacks and Blue Whales spend time fattening up on krill off of the coast of Northern California before heading back down to Baja to breed. A trip to the Farallon Islands, 27 miles west of San Francisco, can be one of the best ways to get up close to these giants of the sea.

You can get out to the Farallones on tours organized by SF Bay Whale Watching, which depart early in the morning from Fort Mason (weather permitting). The two hour haul to the Farallons is a bit harrowing, which is to say strong stomachs, sea legs (and potentially Dramamine) are required.

Once you get to the Farallons, though, the city's concrete highrises feel worlds away. The peaks of the islands themselves – clusters of granite land masses jutting from the gray Pacific water – are shrouded in mist and skirted by a white froth of sea hitting rock. When the wind mellows you can hear the barking of seals and sea lions. The air smells like salt and rot.

This is an ideal feeding ground for whales. The Farallons are located on the edge of the Continental Shelf, where the sea floor plunges from 200 feet to nearly two miles deep. The rapid change in topography combined with the windy conditions causes a phenomenon called “upwelling,” in which nutrient-rich water from the deep ocean surfaces. The plentiful food source attracts a menagerie of wildlife, including migrating whales, dolphins, elephant seals, sea lions, albatross and puffins. And of course, sharks, a Farallon resident made famous through Susan Casey's book, Devil's Teeth (Though shark season is September through October).

Below are photos from our excursion. For more information on whale watching in the Farallons and to book your own tour, check the SF Bay Whale Watching site.

The menacing and dangerous waters around the Farallons churn — exactly the type of place you would expect to find Great White sharks.

A Humpback whale shows its fluke (tail) and then dives.

The Blue Whale is the largest mammal on earth. Here you can see it briefly coming to the surface and a container ship in the distance to give it a bit of scale. This animal is truly giant — they can grow to the size of three school buses. The Blue disappeared nearly as quickly as it appeared, leaving nothing in its wake but a frothy sea and a boatful of awestruck passengers.

Two Victorian houses (center-left) serve as living quarters for visiting researchers. To the far right in the photo is the crane that lifts boats out of the water onto land. You can also see the highest point in the Farallons, Tower Hill (109 ft.) — home to the area's lighthouse.

With South Farallon Island in the background, a Humpback whale passes of the feeding grounds of the Continental Shelf.

The rocks around South Farallon Island have been referred to as the "Devil's Teeth" for their jagged quality and tendency to bring down ships in earlier times.

Whale watchers keeping a keen eye to the water.

Another Humpback fluke breaks the surface of the water.

After a harrowing trip out, several people getting sick, lots of whales, birds, sea lions, dolphins, etc. we returned to the safer and calmer waters of SF Bay.