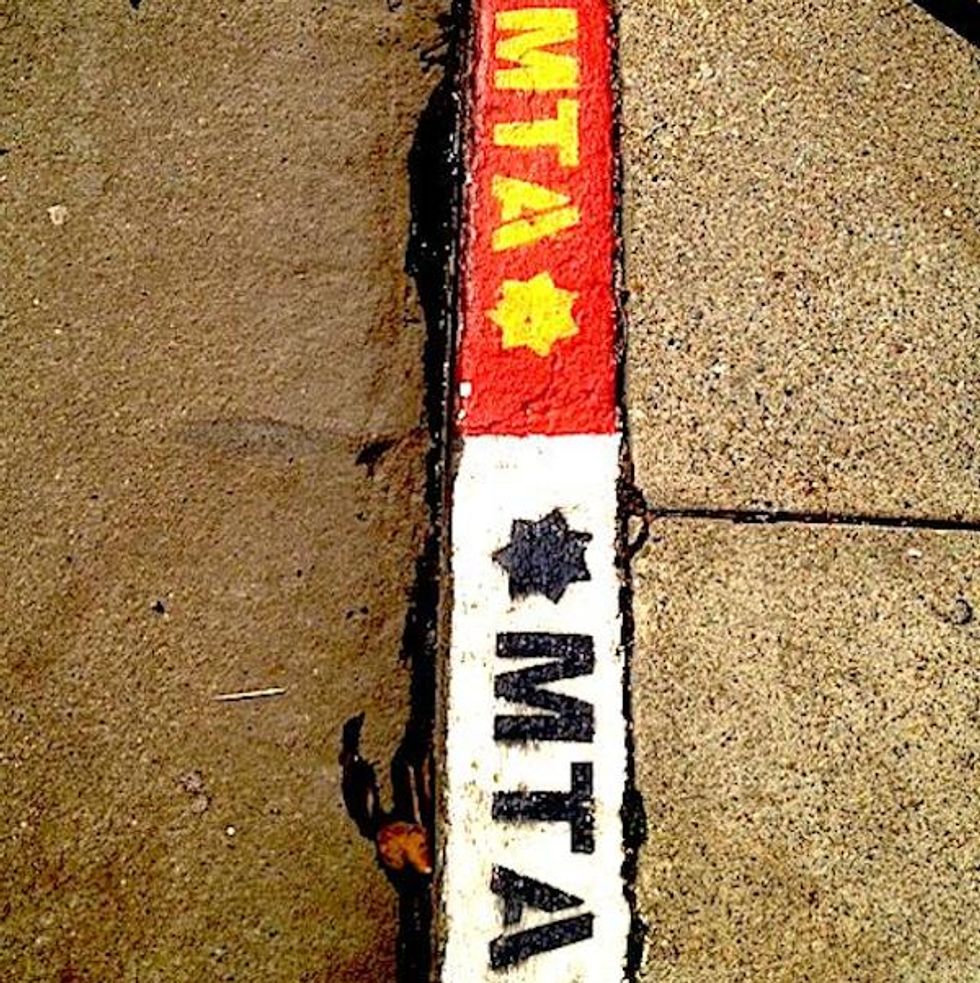 White Magic: How to Successfully Park in the White Zone

It was time to renew my passport. Most of the process is surprisingly easy and efficient. The main challenge of renewing your passport in person at the SF branch is finding parking and trying to not be late for the appointment. Since the SFPark street sensors are offline temporarily, I found myself having to resort to old school methods of finding parking. It's always good to put the low tech backup skillset to use.

As I headed down Hawthorne toward the office – there are a couple new high-rises going up in the area sp most of the parking spots were taken up by pickup trucks and construction zone no parking signs – it was very slow going, and the garage on Hawthorne was already full. At this point, it would have been easy to become frustrated, but my experiences over the last decade have shown me that there are always (always) a few parking spots hidden in plain sight. My strategy is to look for spots that others often assume are illegal: Yellow zones and white zones.

As I sat at the red light a few cars back from the light at Hawthorne and Folsom, I saw it.  Around the corner, on Folsom, 10-feet away from the front door of the building, there was a long white zone, and an AT&T truck was leaving one of the spots.

Because I've done little but immerse myself in parking data for the last 10 years, I knew that this particular white zone on Folsom has a few mid-day general parking hours. I knew that the three cars ahead of me were looking for parking also. One free spot, four cars competing for parking. I liked my chances.

I was sure that all three cars ahead of me would see the unoccupied spot, but assume that they couldn't park there, and drive past it. White zones are completely off most people's radar as a legit place to park, especially at mid-day. This five-vehicle-long white zone had two other workman's trucks and an orange cone in the two spots ahead of it, plus a long row of white zone "no parking" signs on the sidewalk.

The light turned green. The first two drivers turned their heads to look at the spot, but blew right past the vacant spot. The car ahead of me slowed down, considered it for about a second, then kept driving. This white zone was indeed for loading and unloading, but only from 7AM to 10AM and 3PM to 5:30PM. There was no other signage trumping these rules.  It was high noon, I was home free, and ten minutes early.

With my free time, I did what most people do with free time. I stood on the corner and observed parking behavior. I made another prediction that I would see at least two of the three cars that were ahead of me, circle back around on Hawthorne, still in search of parking.

After 5 minutes, my experiment was complete. All three cars came back down Hawthorne in the same order, but with one new car that was added to the number two position in the sequence, all searching for parking. This just added evidence to the fact that one third of all downtown traffic is composed of cars circling while looking for parking.

I got my passport, came back down after 15 minutes and was ready to leave. But before I did I asked a driver at the red light if he was looking for parking. He said he was. I said that I was leaving and was in the car right there at the corner. He was grateful and waited beside me for me to leave. Then suddenly, he said out of his window, "That's a white zone. I'll get towed." And he drove off.