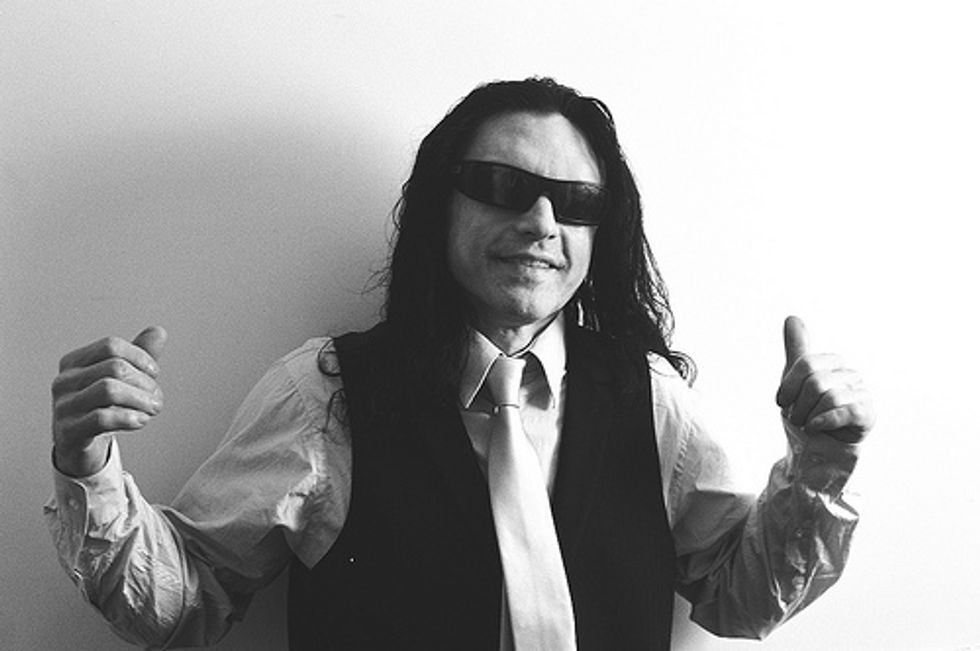 Who's Johnny? Tommy Wiseau Speaks on His Cult Classic 'The Room'

Ladies and gentlemen, I give you the ultimate last-minute Christmas gift: Tommy Wiseau. I caught up with the enigmatic and often just plain hard-to-understand director of the off-the-wall cult classic The Room, which plays at a midnight screening this Saturday at The Clay,  when he came to San Francisco for the film's 10th Anniversary screenings last month.

As much as he's known for his classic line "You are tearing me apart Lisa!" Wiseau is known for his inscrutability as an interviewee--sometimes he goes off on a tangent, sometimes he gives the same interview twice, but he never disappoints. Strap in and check out the (much abridged) highlights of our conversation below:

Since we're a San Francisco-based magazine I want to start by asking you, why San Francisco, why not LA or somewhere else?

Well, you probably know that in San Francisco you have a real variety of multiculture. People don't realize that San Francisco, for example, has the cable car, 49ers, gold rush etc... It's a rich history, from Golden Gate Bridge to Golden Gate Park, from Bay Bridge to Bay to Breakers--I think there is a very rich cultural history, a big part of American history if you think about it.

Let's talk a little about Johnny. Who's Johnny? Is he you?

You know, he's a character. He's a banker that works for the bank and he's supposed to get a promotion but he doesn't, and, as you know, he hasn't chosen better than his crowd and he's been betrayed by his best friend. So there's our boy, you know. We've all fallen on these experiences, I believe. He doesn't see the truth, what's happening between him and his future wife, etc. So I would say, Johnny's character to others is a red flag, what [do] they say, "Don't do it, it'll come around, and bite you... in the head" ...hehehehehe.

So Johnny is a kind of lesson?

Absolutely, it's a red flag. We've been screening it for 10 years, you know, and people don't really get it. You know, I'm a very serious guy, and it is what it is. Move on, next question.

I know a lot of people before now who heard about The Room from the huge billboard in LA on Sunset. Is it still up?

No, we had it for 5 years and we took it down. It was supposed to be one month (laughs). But for 5 years, you know. This is the thing that I like people asking because it's funny, it's really funny. That was the plan, you know, to make people see the movie. I graduated from Laney College in the Bay Area and I studied at ACT and Stella Adler's shop, so basically, I am a stage actor. It's pretty laughable to be honest with you (laughs), it's not my style to act like that.

If Johnny was me he would still be alive. To commit suicide, I think he's in a delusional situation. When you're in this kind of situation, I mean, how low can you go? You can go so many different ways. I mean you may say Lisa finds another guy and it's over, but this is a love story that goes much over the edge of human behavior.

It is a love story, and it's got so many love scenes! Why did you put so many of them in there?

Again... first of all, I'm happy that you say "love scene," because 99% of people say "sex scene," and I always have to correct them. I guess you did your homework, or whatever. It is a love scene. Why? I think because again people relate to it a certain way that I see the world and I don't see nothing wrong with saying to a girl "Hey, I love you" but it doesn't mean that you're actually being physical with the person.

Is that what lead you to make your film, Homeless in America?

You know, that's right! If I were there I would hug you, man. Absolutely. I mean, that's something I did, for my own money, and I got a lot of different feedback on it. Nice feedback.

What do you think about (the actor who played Mark in The Room) Greg Sestero's new book, The Disaster Artist? I haven't read it yet.

Well, uh... I have no comment except how much I'm supporting him if you want to ask about it.

I have some reasons... I don't think there is enough time to give you those things. I think certain stuff is exaggeration. Like, for instance, I have always had hair (chuckles). I think it's an exaggaration but I'll leave it alone, because he is my best friend, Greg, and I don't like to criticize any person.

Maybe it adds to the mystique of The Room?

Yeah, you know he had a premiere in Los Angeles that I was attending, and I, I think that I'm glad and he did a great job, but on certain stuff I disagree.

In terms of things you maybe feel better about, how does it feel to have The Room be such a big cult hit, do you feel vindicated?

You know I've always believed in it, so I don't know what you're asking about. But I'll just say that I'm very surprised. You know, I made it for America, American culture is a unique culture. Once I was contacted by Canada, they said, "Can we show it?" and I said "Yes." Then London called, I said "of course." But I'd say, yes, I'm very happy. I didn't know how many years we'd still be kicking, each year is stronger than the beginning, and this year is stronger than last year.

The Room screens this Saturday at Midnight at the Clay Theatre. It plays monthly at the Clay every second Saturday, and at the Piedmont Theater in Oakland every third Saturday (including 12/21).