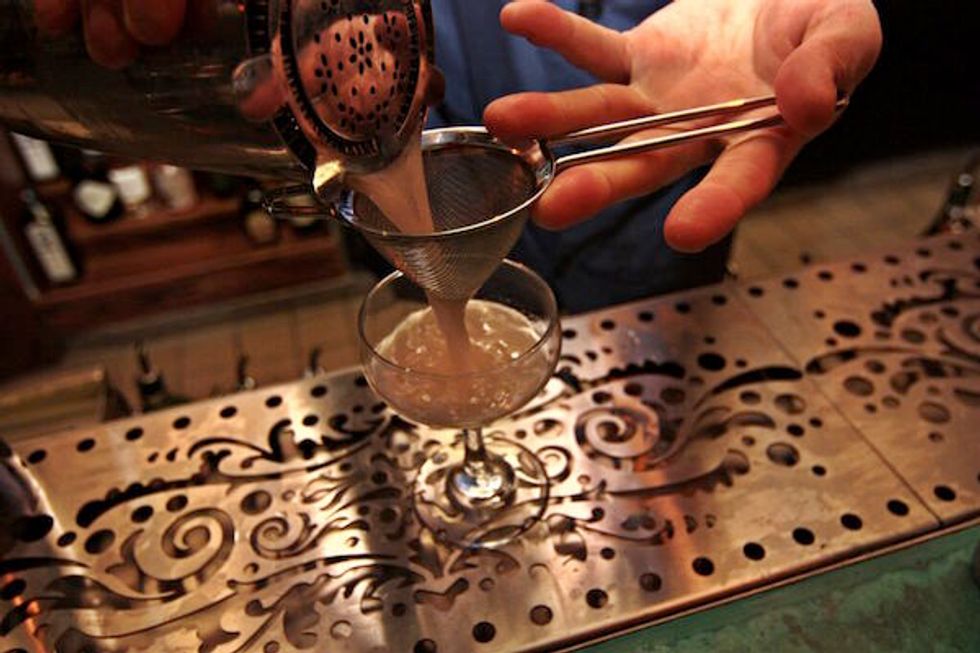 With 370 Varietals and 110 Cocktails, Gin Geeks May Now Worship at the Altar of Whitechapel Bar

It would have been a hoot to eavesdrop on the planning meetings between Martin Cate, owner of the new gin bar Whitechapel which opened this week, and Ignacio “Notch" Gonzalez, the designer who brought the offbeat concept to life. Conceived along with managing partner John Park and beverage director Alex Smith (formerly of Novela), the vibe at Whitechapel is meant to evoke an abandoned London tube station that's been taken over by a Victorian-era gin distillery and nightclub. And since this project comes from the team behind Smuggler's Cove, you won't be surprised by the total attention to detail: “I'm a real proponent of creating a space that is engaging and transporting as well," Cate says.

Notch went all out, sourcing tiles from the London Underground to be formed in an acanthus pattern from 1908, and cunningly applying water damage to the ceiling, and exposing electric cables that loop around the walls. Even the “last call" bell was made by the Whitechapel Bell Foundry, the same 500-year-old foundry that made the bell for Big Ben.

But all of this only begins to set the stage for the raison d'etre of Whitechapel: its curation of 370 varieties of gin—supposedly the largest collection in North America. Bottles are arranged on the shelves by style, including London Dry, Old Tom, aged, navy strength, flavored, and genevers. Meanwhile, behind lock and key, chosen ones will find the holy of holies: a gin library of rarities, arcane finds, and vintage spirits such as Beefeater from the 1950s, '60s, and '70s (the labels alone are a treat) and a 1940s Booth's London Dry. “Beautifully preserved from many moons ago," these gins, says Cate, are "a wonderful opportunity to time travel."

With so much to play with, beverage director Smith has concocted a menu of 110 cocktails that showcases the long history of gin, with drinks from the days of the Dutch and British gin trade as well as forgotten recipes and modern staples.

Connoisseurs need not panic: There is time to taste it all. An educational program, similar to the rum club at Smuggler's Cove and lead by "ginnoisseur" Keli Rivers, will allow regulars to track what they've sampled as they progress through the menu over time. For normal folks just looking for an end-of-day drink, though, there's no shame in ordering a classic rickey.

Lest things get out of hand, there's food too, and it's as thoughtful and far out as you might expect. The cuisine? Why, it's Anglo-Dutch-Bengali, of course, which Cate admits “sounds like a hipster joke." But the creations of chef David Murphy, a transplant from Austin, TX, give their own playful nod to the two great gin cultures, and also celebrate the largely Bangladeshi population of the London neighborhood for which this bar is named. Chicken and waffles, for example, is translated into Brace of Quail, fried with gin botanicals, Bangladeshi spices, and served with a Dutch stroopwafel.