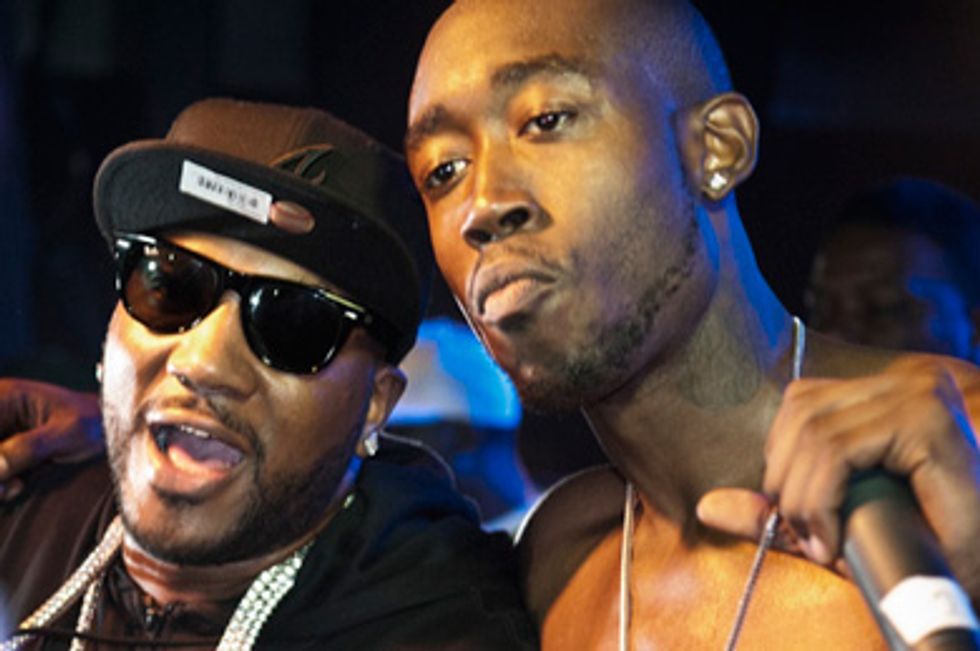 One of Atlanta's finest MCs, Young Jeezy, drops by the Mezzanine tomorrow night with cohort and collaborator Freddie Gibbs. One has occupied mainstream consciousness for years, and the latter is as up-and-coming as they get–both are hungry to tell their stories, which'll make for a firestorm on stage.

Forget about Odd Future's raps about how many pills and different kinds of booze they can pour into a blender and Lil Wayne's alien rhymes for one second and harken back to the days when rappers spun tales of coming up from nothing. Case in point: Jeezy's an old-school hustler who dealt drugs on the streets of the Georgia capitol, so when he says "My PO's tellin' me I need a nine to five/I already got a job, and that's stayin' alive", you know things haven't come easy. Similarly, Freddie Gibbs (don't be fooled by the prepster name) has a low growl and defiantly spits about why he'll never forget his roots as a drug dealing thug in the face of the record industry.

So it was a match made in a rap fan's wet dream when Jeezy signed Gibbs (who's released a slew of mixtapes since 2005 after getting dropped by Interscope before he could make anything for them) to his CTE label to help make yet another Gibbs EP, Cold Day In Hell, this summer. Not to mention Jeezy's own new album TM 103, which is imminent. That means you can expect a ton of new material and mic-sharing.

Grab tickets here. Doors open at 9 pm. Check out Young Jeezy's classic "I Luv It" and Gibbs' "National Anthem" below.