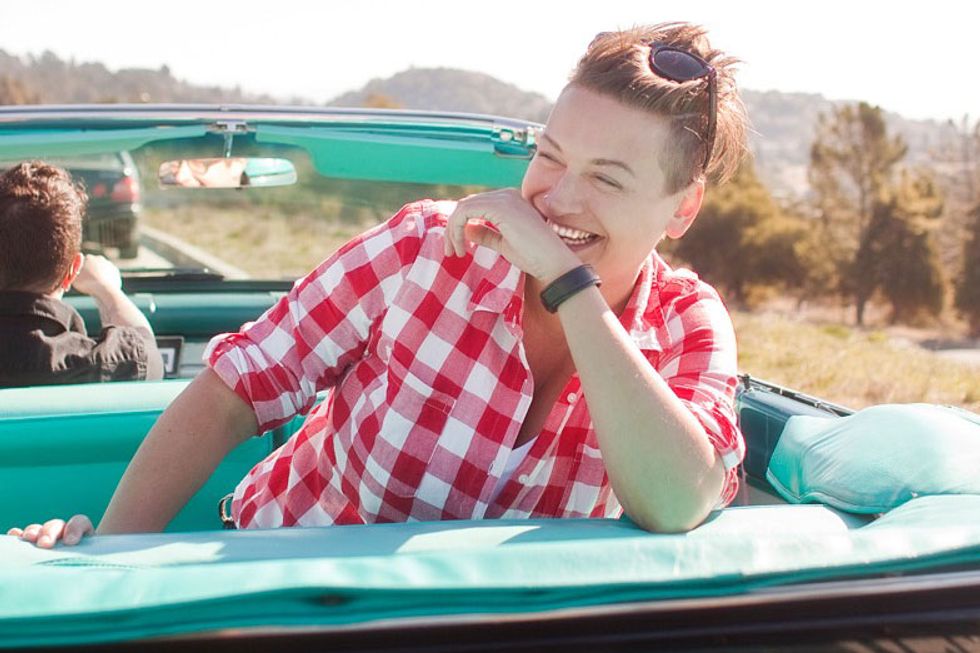 The Bay Area is a longtime literary mecca, with famous wordsmiths, from Lawrence Ferlinghetti and Diane di Prima to Amy Tan and Michael Chabon, calling this swath of the West Coast home. Perhaps there's something in the water, or maybe it’s our unique cultural climate. Whatever the case, the Bay Area brims with must-read talents. Here are our picks for the local authors to watch this year.

Allison Moon is the author of the bestselling sex-ed guide, Girl Sex 101, the sexy memoir, Bad Dyke, and two novels about lesbian werewolves (seriously). To say that Moon’s work is fun would be an understatemen, and the same could be said for the author herself. The woman is the literary equivalent of an amusement park: bright lights, bells, whistles, and all. Don’t let the shiny parts fool you, though—Moon backs up her fun times with substance. This year, we can expect to see Moon branch out into the worlds of film and TV—she's working on an original pilot and two feature-length screenplays, and she also hopes to put together a Girl Sex 101 spinoff during what she sarcastically calls her “ample free time.”

Favorite book she read in 2015: We the Animals by Justin Torres

Cassandra Dallett, a raspy-voiced poet from Oakland, published her first full-length book of poetry in 2014; in 2015, she released five chapbook collections. Now, the prolific writer is delving into her back catalogue to release her first collection of prose. Entitled Raw, Dallett calls the book immensely personal, and confesses, “I am terrified and thrilled that these stories are going to make it into the reading world.” These are apt words to describe the work of Dallett, whose poems have a way of leaving the reader wide-eyed. Once you read Dallett, you’re certain to want more. Raw will be released by Punk Hostage Press in 2016.

Favorite book she read in 2015: This is How You Lose Her by Junot Diaz

If there is truly truth in comedy, then Kamala Puligandla is a master of the truth. Her characters seem like people you know—friends or enemies you might have had if only you'd grown up in another place. Puligandla is a regular author at the ribald competitive fan fiction show Shipwreck, at the San Francisco Book Smith. In addition to working on her first novel, Zigzags, she will also be performing as part of the all-woman lineup at Write Club on March 15, hosted by author Maggie Tokuda-Hall.

Favorite book she read in 2015: Between the World and Me by Ta-Nehisi Coates

A San Franciscan by way of Ohio, James Sigel draws readers in with heartfelt recollections of his youth and explorations of the strange beauty of "fly-over country," otherwise known as his native Midwest. A great deal of his poetry is inspired by loss and memories, ghosts (literal and figurative), the paranormal, and what waits for us just on the other side. His work sets the inexplicable against familiar landscapes.

Favorite book read in 2015: The Secret History of Wonder Woman by Jill Lepore

Favorite book read in 2015: A Little Life by Hanya Yanagihara

Na'amen Gobert Tilahun has a lot of opinions about a lot of things—a quality that definitely carries over into his work. His first novel, The Root: A Novel of Wrath & Athenaeum, will be released this spring. Meanwhile, Tilahun is working on the second book in the trilogy The Tree, and a YA novel called The Link Between Water and Sky, about a queer black girl raised in a family of pirates. A charming conversationalist, he is also cocreator and cohost of the podcast "The Adventures of Yellow Peril + Magical Negro."

Favorite book he read in 2015: Archivist Wasp by Nicole Kornher-Stace

Ben McCoy is a writer, visual and performance artist, and a quadruple Scorpio. Watch out—Ms. McCoy seems to be moving faster than the world around her. Smart, funny, and acerbic, the lady McCoy has been in an sward-winning musical and has toured the U.S. twice with her own original material. You can watch her hilarious spoken word video "How a Lady Takes Public Transportation," or check out her thoughts on fashion in the article Paint it Black: Getting Dressed When Depressed. If you're wondering what 2016 holds, friend McCoy on Facebook and ask her for a tarot reading. An insightful writer, she will no doubt have interesting things in store.

Favorite book she read in 2015: Fear and Clothing by Cintra Wilson

When Bucky Sinister writes, it just feels honest. He has written four books of poems and two self-help books; his most recent project, a transgressive science fiction novel called Black Hole, is set in the Tenderloin and the Mission. Sinister has appeared in Bobcat Goldthwait's Willow Creek, and he also performs standup comedy around the Bay Area.  This year, catch him in the forthcoming Amber Tamblyn film, Paint it Black.

Favorite book he read in 2015: The Infinite Wait by Julia Wertz

Wadlington grew-up in Tennessee where, according to his online bio, "he learned to tell stories and make biscuits.” Now based in SF, he serves up prose that marries down-home charm with a modern-day twist. On April 4, 2016, see him perform his work in "Funny Sexy Sad" at Second Act; and April 19th, at Out Storytelling at Oasis. The October release of the satire collection "Loose Lips" will also feature Wadlington's work. In the meantime, sign up for his Sunday newsletter, Drafts, for creative 5-minute writing prompts.

Daphne Gottlieb is a woman of contradictions. She uses her high brow literary skills to conjure images of low brow living, managing to create works that are both terrifying and beautiful. Take her recently published 10th book for example: Pretty Much Dead is a collection of post-fabulist short stories about mental illness, homelessness, and gentrification. Gottlieb is also the award-winning author of five books of poetry, a graphic novel, and editor of two anthologies; she also edited the nonfiction book of letters from the "first female serial killer"—Dear Dawn: Aileen Wuornos in her Own Words. When asked what she has planned for the coming year, she says, “I’m simultaneously working on a children's book and a book of experimental fiction about anonymous sex.”

Favorite book she read in 2015: Streetopia by Erick Lyle

Anthony Miller's work ranges from camp to absurdist slapstick to horror, with influences ranging from playwrights Charles Busch and Neil Simon to cult movies, punk rock, DIY culture, and underground art. “I got my start reading poetry in bars, so I’m always trying to do work that would not only appeal to regular theatregoers, but people who wouldn’t regularly see a play ever,” he says. This January, Miller has a short work in “The Morrissey Plays,” produced by SF TheatrePub, and in October, look for the sequel to his 2014 TERROR-RAMA. Opening at Pianofight in the TL, TERROR-RAMA 2: Prom Night will include a work from local playwright Claire Rice as well as Miller's latest, Sexy Vampire Academy.

Favorite book he read in 2015:  The Last American Vampire by Seth Gramme Smith

A writer, performer and artist educator, Denise Jolly is a capable master of complex subject matter—her work is tender and open, with no attempts at making difficult topics seem simple. Also the founder of the Be Beautiful Project, Jolly will release new guerilla photo shoots this spring. She is also planning a new collection of critical essays.

Baruch Porras-Hernandez is the cohost of San Francisco Queer Open Mic, the voice of Shipwreck, and the force behind the Latino literary festival ¿Donde Esta Mi Gente? The SF-based Lambda Literary fellow has been published in several anthologies, including "Assaracus" (Sibling Rivalry Press), "Divining Divas" (Lethe Press), and "Aim for the Head" (Write Bloody Publishing). His work is funny, sweet, and absurdist—a welcome diversion onto the unbeaten path. Porras-Hernandez has recently begun editing his first full-length collection of poetry; he is also working on a series of poems that places Aztec gods into the modern world.

Favorite book he read in 2015: How to Grow Up by Michelle Tea