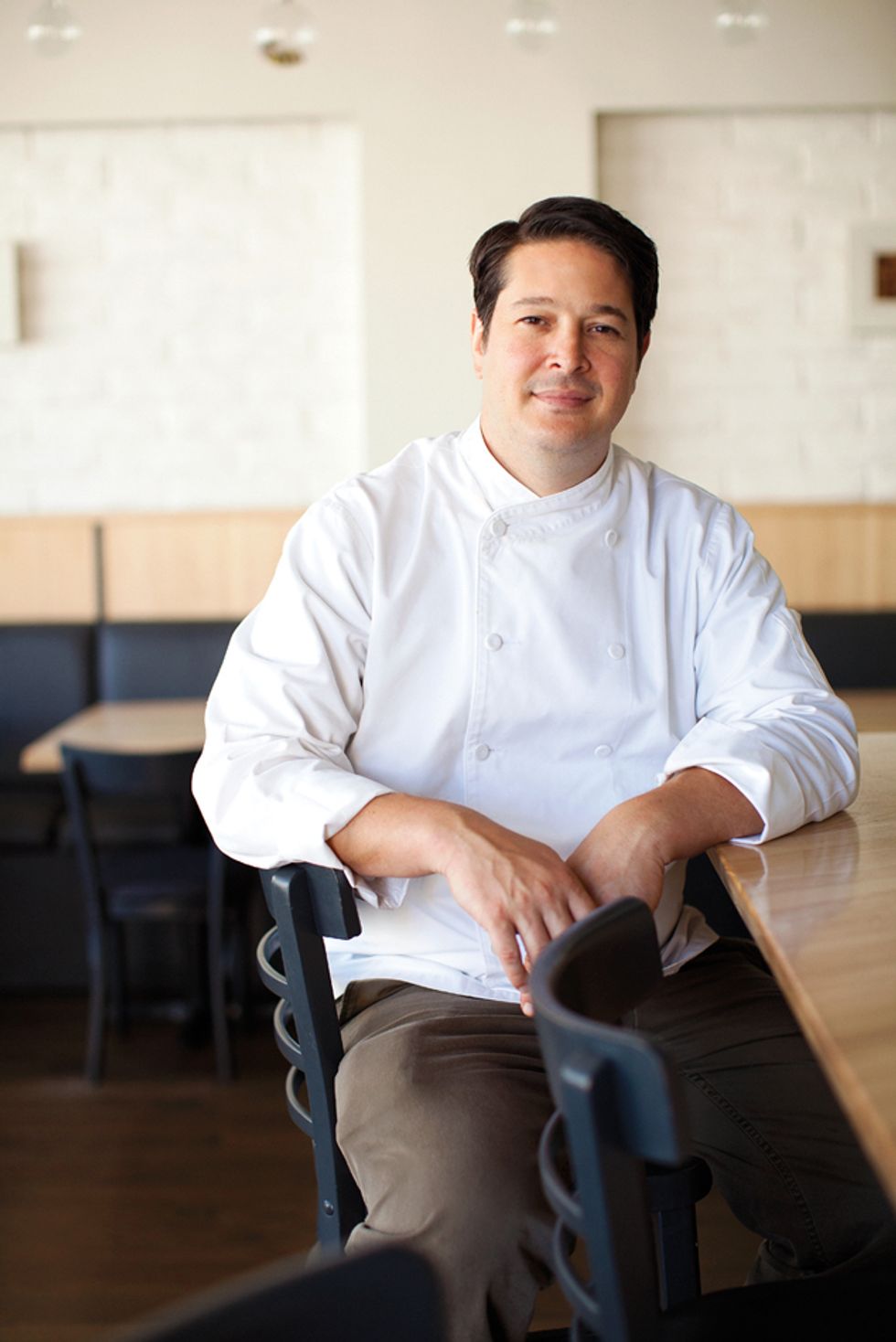 Lauded as a game-changer when it opened in 2010, Commonwealth has lived up to that promise, turning out small plates of inventive food that showcase a unique combination of local produce, modern technique, and international influence, which have surely informed the city's current culinary landscape. Executive chef and co-owner Jason Fox (previously of Bar Tartine) puts together crazy-sounding dishes that often make perfect sense only after you’ve stopped thinking about them, and starting eating—and he highly recommends the tasting menu. (A solid move: not only will you get to try lots of stuff, $10 from every tasting menu goes to an area non-profit.)

Here, we talk frozen vegetables, urchin, and why this is his favorite time of year. (Hint: It’s not the Christmas carols.)

In high school, my friends and I would cook a lot of stuff. And my dad was pretty formative in making me try everything. So it’s not really one memory, it’s just trying lots of different things over the years.

You have a guest at home that you want to impress. What’s the go-to meal?

The go-to meal… Well, I’m usually just using salt and seasoning, whenever I cook at home—no one ever seems to season their food properly so people are always really impressed by that. At home, it’s usually real simple, like roasted vegetables, maybe some pork on the grill, whenever I barbecue people are always pleasantly surprised.

They should get the extended tasting menu and get to try about fifteen dishes. As far as one thing... sea urchin is always a favorite. I’ve been told by the purveyors we buy from that we sell more sea urchin than most of the sushi restaurants. We’ve probably done 15 different urchin dishes since we’ve been open; that’s one of my favorite ingredients. We like doing tasting menus, longer-format menus where we can try to do a wider range of things. It’s more fun to try a lot of different things, too.

What’s your favorite dining experience in the Bay Area, other than here?

I love Atelier Crenn. I think Dominique is pretty awesome for that spectrum of creativity and just really well thought-out food. More everyday-ish, I love dim sum down at Koi Palace in Daly City.

What is the most outrageous thing that’s ever gone down here?

Nothing really too outrageous has happened… I mean, I’m sure people have had sex in our bathroom before…

You kill your sommelier and find yourself on death row. Final meal?

It would probably be nice, good, clean sushi.

Besides salt? Citrus. I mean, this is one of my favorite times of year—we’re getting fresh yuzu and lemon and six different types of tangerines. We have it featured prominently sometimes, but some things are just seasoned with a squirt or a zest. It brightens up a dish.

I like San Sebastian a lot, from the high-end, super good, three-star Michelin stuff to just pixtos anywhere. I think Paris is pretty awesome these days, with the Inaki influence, like the casual gastronomy meets a more Nordic sensibility; it seems like that’s everywhere… Besides San Francisco, Manhattan is always great. I wish I could get to the first two more often.

I eat everything. I try not to be snobbish. What do I eat? I don’t know. Frozen Trader Joe’s vegetables? They’re not fancy. Fast food! I mean, I don’t really eat fast food, but I would eat it though.

Oh bacon is awesome. It’ll never—I mean, I guess it's awesome and overrated. But smoky, chewy, crispy meat never goes out of style. It can be annoying if it’s in everything, but there’s always a place for it. Who doesn’t like chewing on a piece of bacon?