A Photographic History of Protest in San Francisco

While most of the Bay Area was marching for women's rights on Saturday, artist/activist Zach Fernandez was scaling the Golden Gate Bridge to hang his own massive protest poster from the iconic landmark.

Fernandez, who is also responsible for altering the Hollywood scene to read "Hollyweed" on New Years Day, told TMZ that he managed to get onto a walkway below the roadway of the Golden Gate Bridge on Saturday night to install a banner which reads "IMPEACH," SFist reports. He also managed to snap the daylight shot of it above before it was removed on Sunday morning.

Of course, this weekend's many protest activities were somewhat par for the course in the Bay Area, where we have a long history of political and social action. Over the last 60 years, San Franciscans have joined together to denounce segregation, inequality, the Vietnam War, the Iraq War, Wall Street, tenant eviction, and more. Take a look at SF's history of protest in the slideshow below and take heart— whatever the next four years brings, our city will be ready to resist, signs in hand. 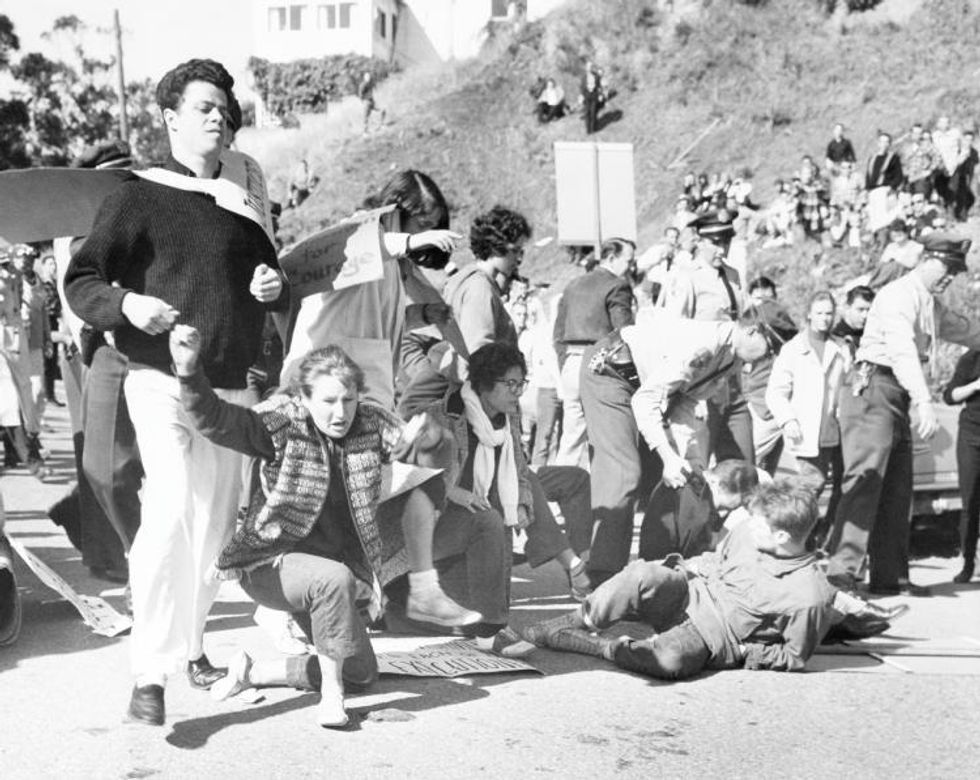 On May 2, 1960, demonstrators protested the execution of Caryl Chessman outside San Quentin. Chessman, only 27 at the time, was executed for sex crimes committed as the notorious thief and sexual predator the 'Red-Light Bandit'. During the trial Chessman repeatedly refuted claims that he was the Red Light Bandit, but could not provide evidence corroborating his innocence. During his twelve years on Death Row, Chessman became a cause celebre. His case won media exposure as he presented himself not only as an innocent man but also as one rehabilitated from his prior life of crime. His case attracted interest and support among leading criminologists, liberal intellectuals, and ordinary citizens, many of whom engaged in protests to halt Chessman's execution. (Clarene Hamm/AP) 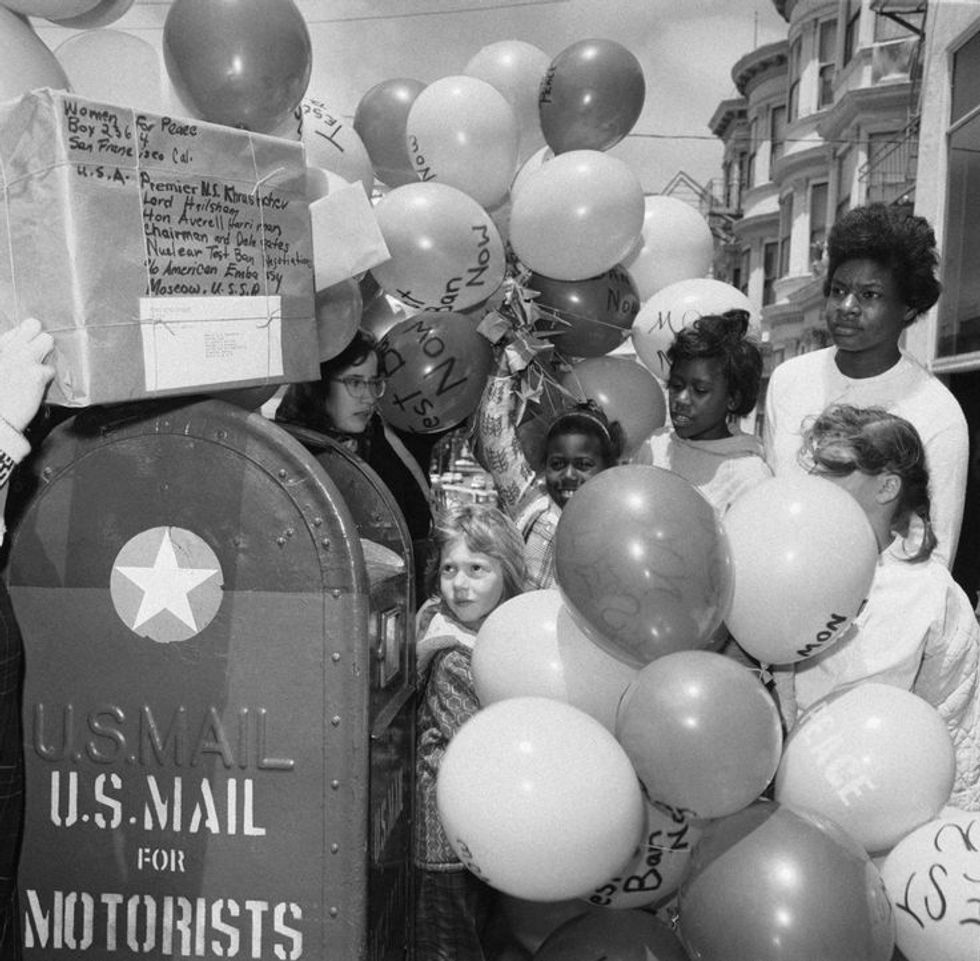 In 1963, the San Francisco Women for Peace released large quantities of balloons in the Haight with the slogan "Test Ban Now"�� on each one. The slogan referred to the Limited Nuclear Test Ban Treaty, which prohibited nuclear weapons tests or other nuclear explosions under water, in the atmosphere, or in outer space and pledged signatories to work towards complete disarmament, an end to the armaments race, and an end to the contamination of the environment by radioactive substances. On August 5, 1963, after more than eight years of difficult negotiations, the United States, the United Kingdom, and the Soviet Union signed the treaty. (AP) 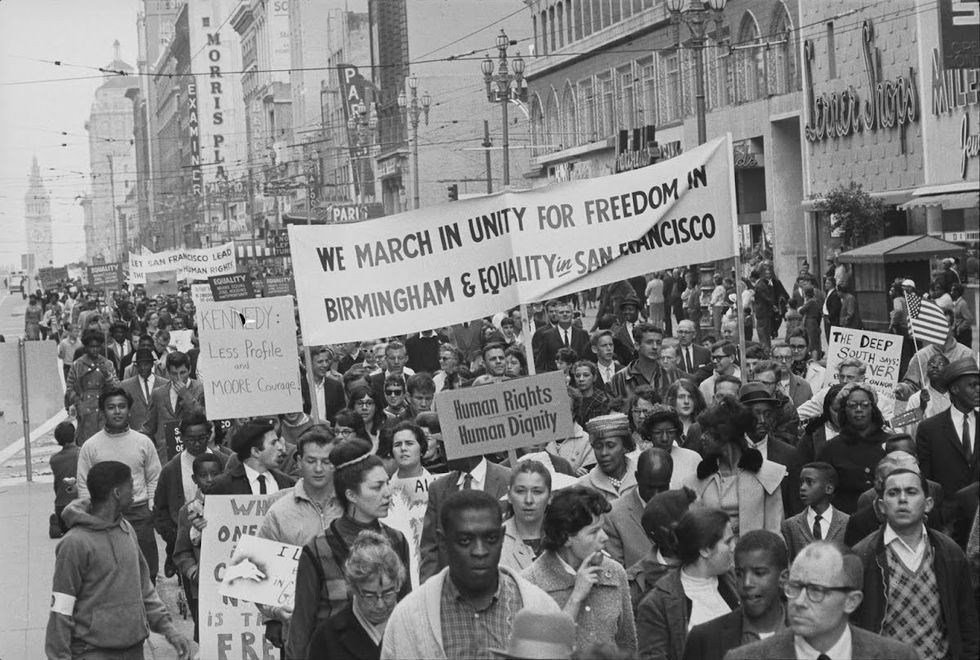 Protesters march in the Big Colored Parade along Market Street to City Hall during the Civil Rights Movement in 1965. (From the Collection of the Bancroft Library, via Google Cultural Institute)

Spring Mobilization to End the War in Vietnam, April 1967 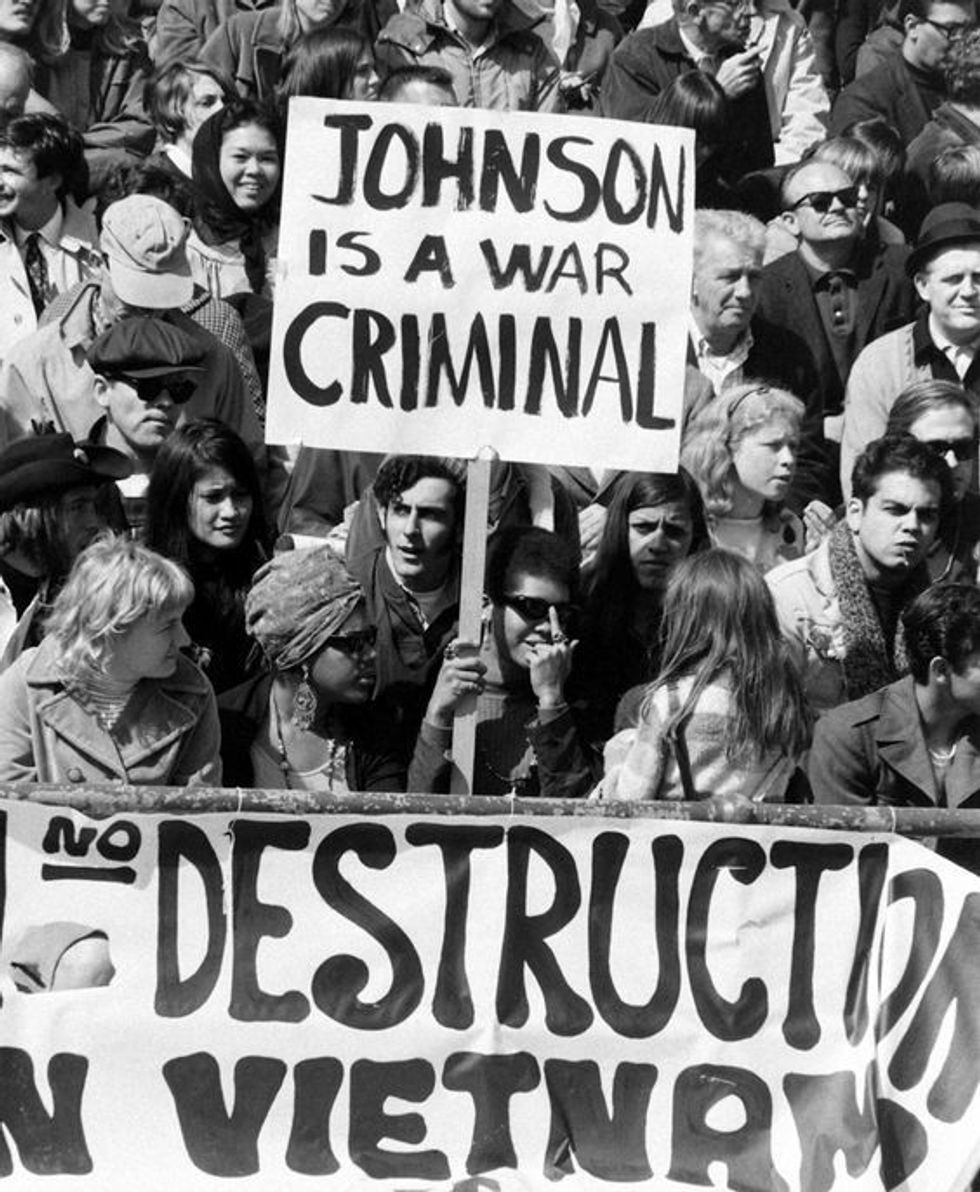 Vietnam protesters gathered at Kezar Stadium in April 1967 as part of the Spring Mobilization to End the War in Vietnam. The Spring Mobilization was organized the previous fall to sponsor antiwar demonstrations in the spring of 1967. On April 15th, 60,000 people marched in San Francisco (with another 125,000 people marching in New York City) making it the largest antiwar demonstration the country has ever seen. (via TIME) 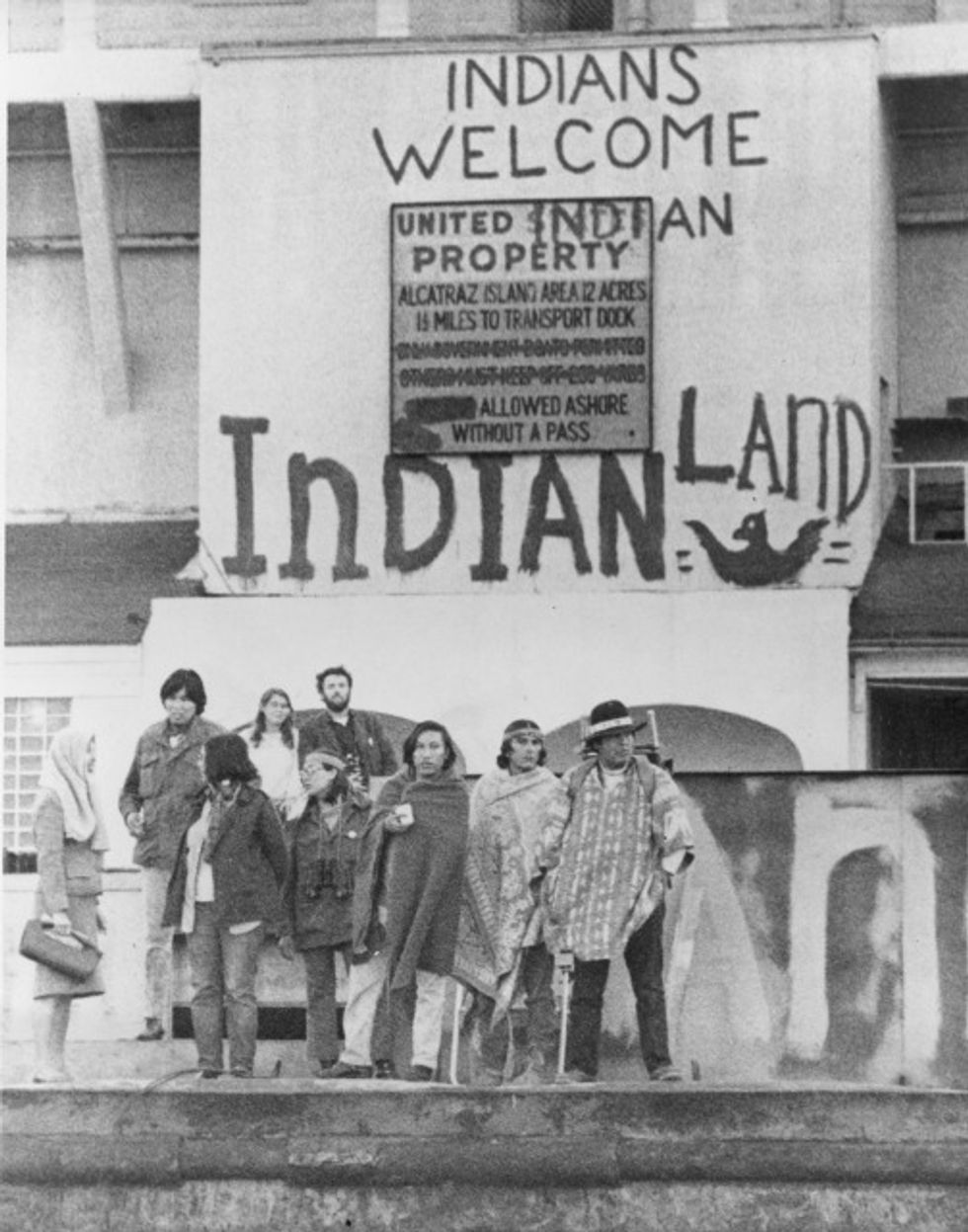 A group of 78 Native Americans occupied Alcatraz in a demonstration for the rights of American Indians. They held control of the island from November 20th, 1969, to June 11th, 1971.(Vince Maggiora/SF Gate) 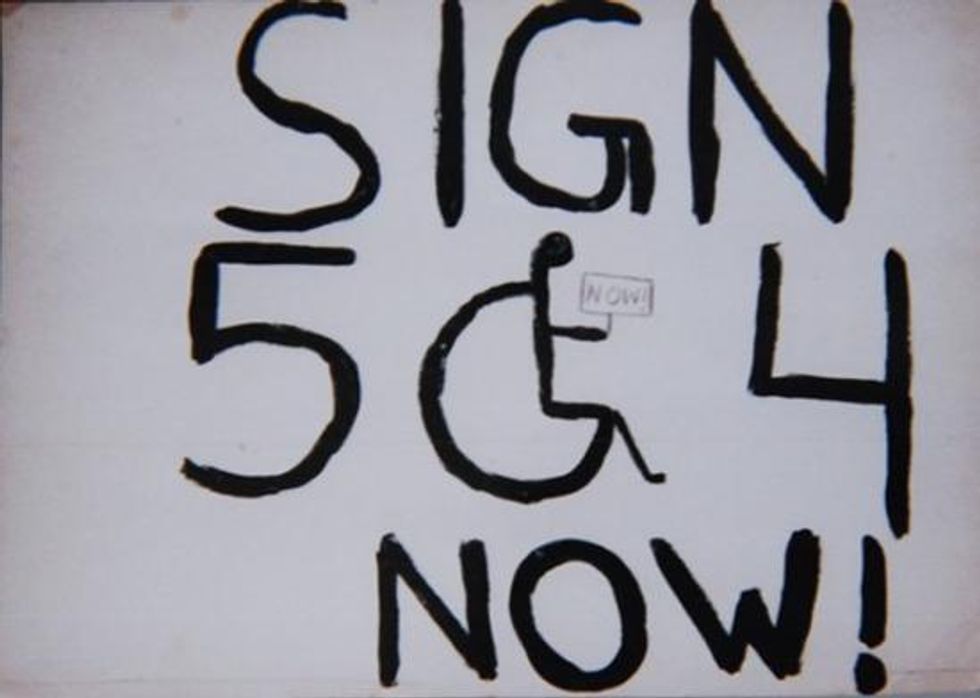 For 25 days in April 1977, a group of roughly 150 disability rights activists took over the fourth floor of a federal building in San Francisco. They would not leave, they said, until President Jimmy Carter's administration agreed to implement a four-year-old law protecting the rights of people with disabilities. (via Smithsonian) 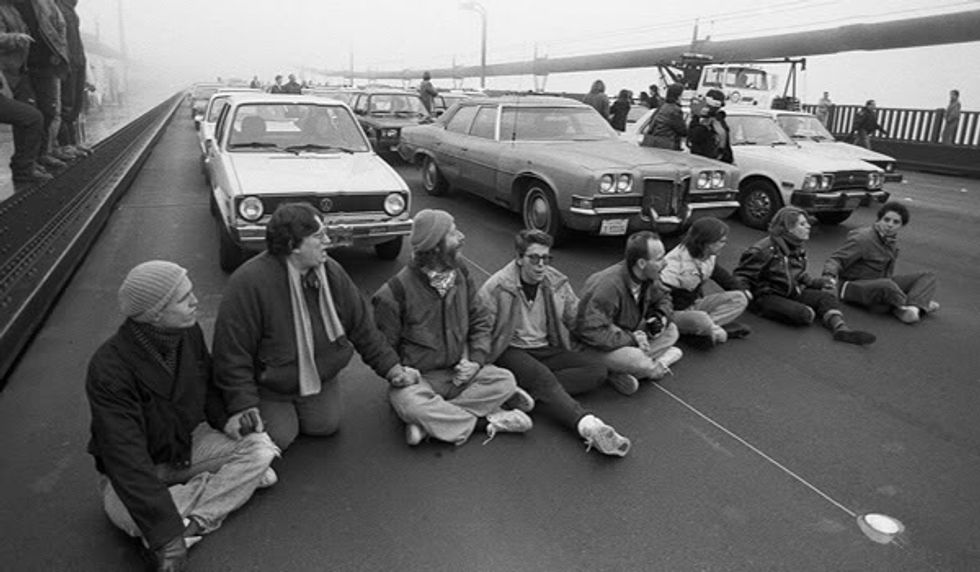 On January 31, 1989, activists from Stop AIDS Now or Else (SANOE) blocked the morning commute on the Golden Gate Bridge. (Rick Gerharter)

Women's March Against the Israeli Occupation of the West Bank, September 2002 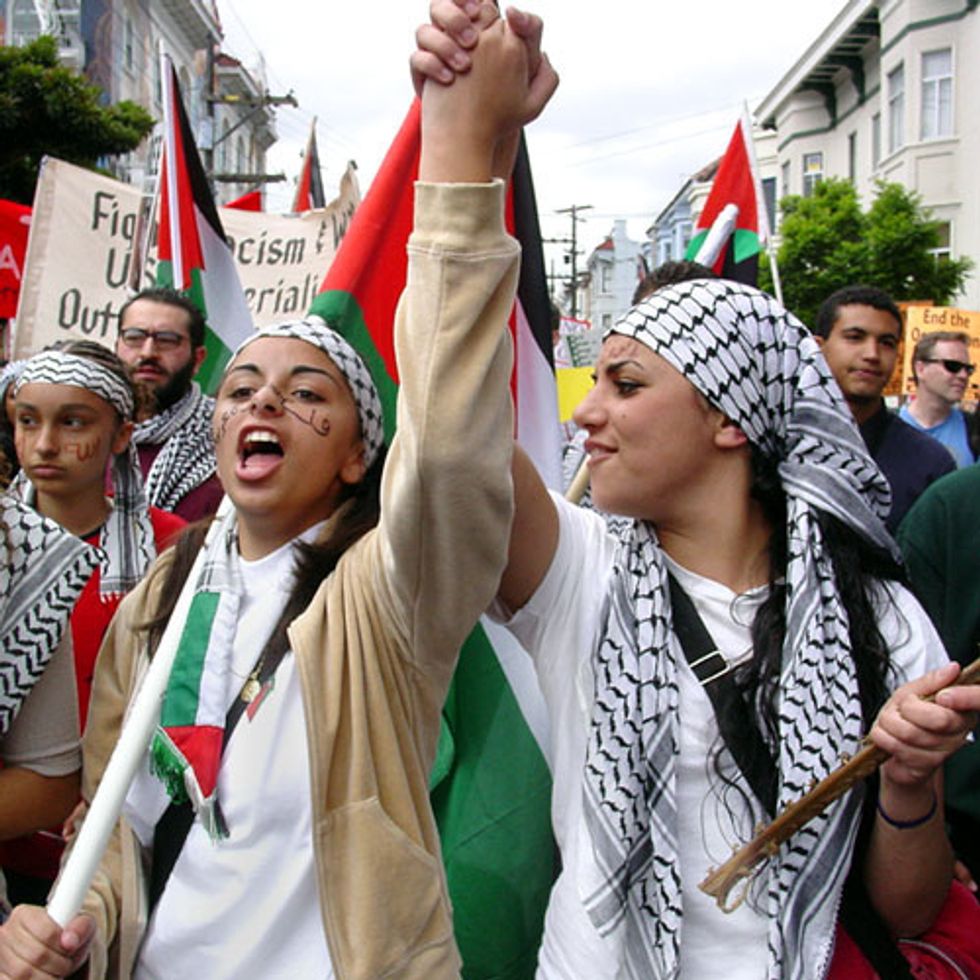 As part of a national day of protest sponsored by the Justice in Palestine Coalition, about 3,000 Palestinian women protested the Israeli occupation and military aggression against civilians in the West Bank and Gaza by marching down Market Street in San Francisco. (David Hanks) 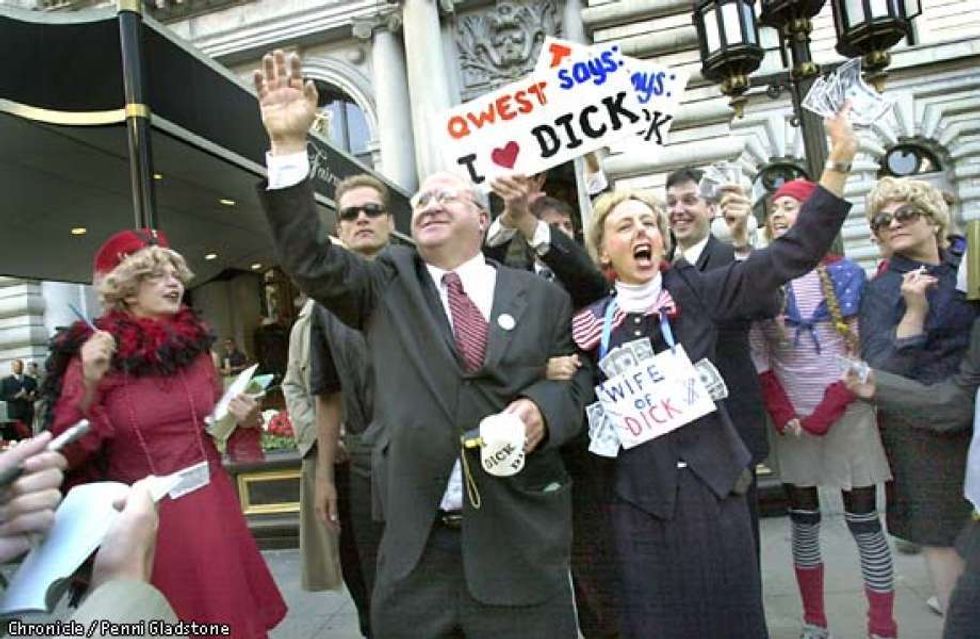 Demonstrators carry signs outside the Fairmont Hotel where U.S. Vice President Dick Cheney delivered the keynote address to the California Commonwealth Club. An estimated 500 protesters greeted Cheney, which was briefly interrupted inside the ballroom by five hecklers from Global Exchange seated in the audience. (Penni Gladstone/ SF Chronicle) 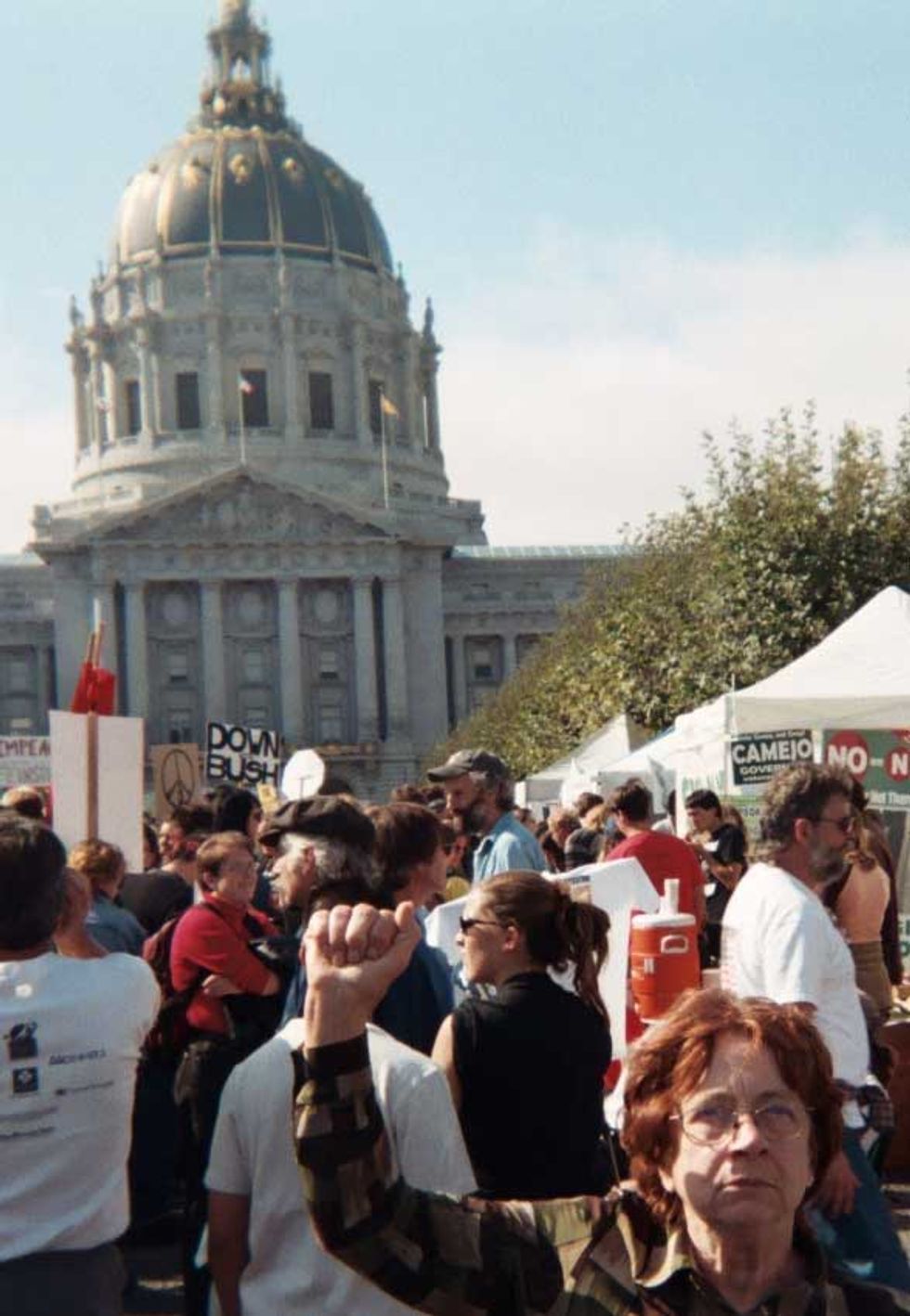 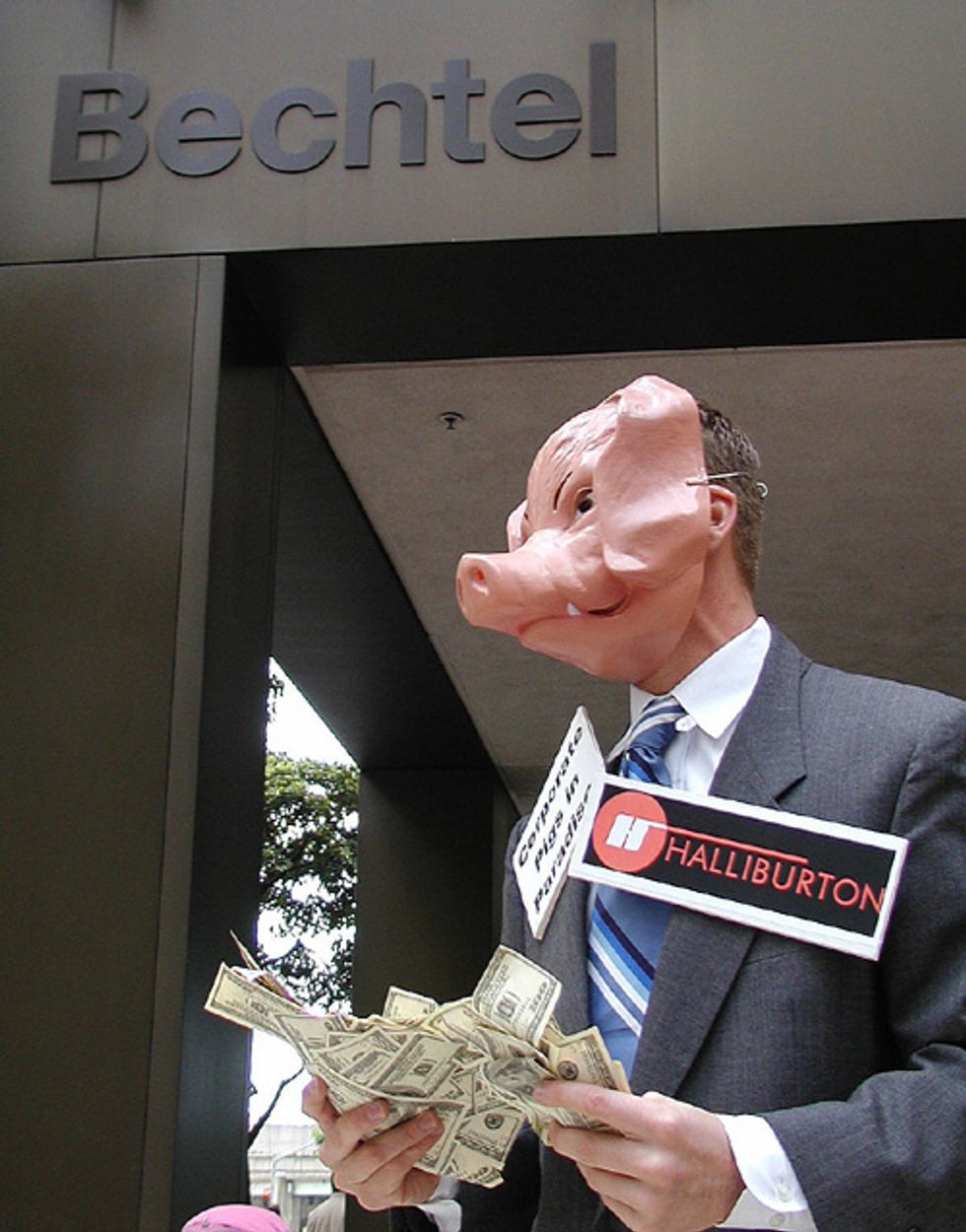 Several hundred activists gathered in front of Bechtel corporate headquarters at 50 Beale Street to protest the corporate invasion of Iraq. (via IndyBay.org) 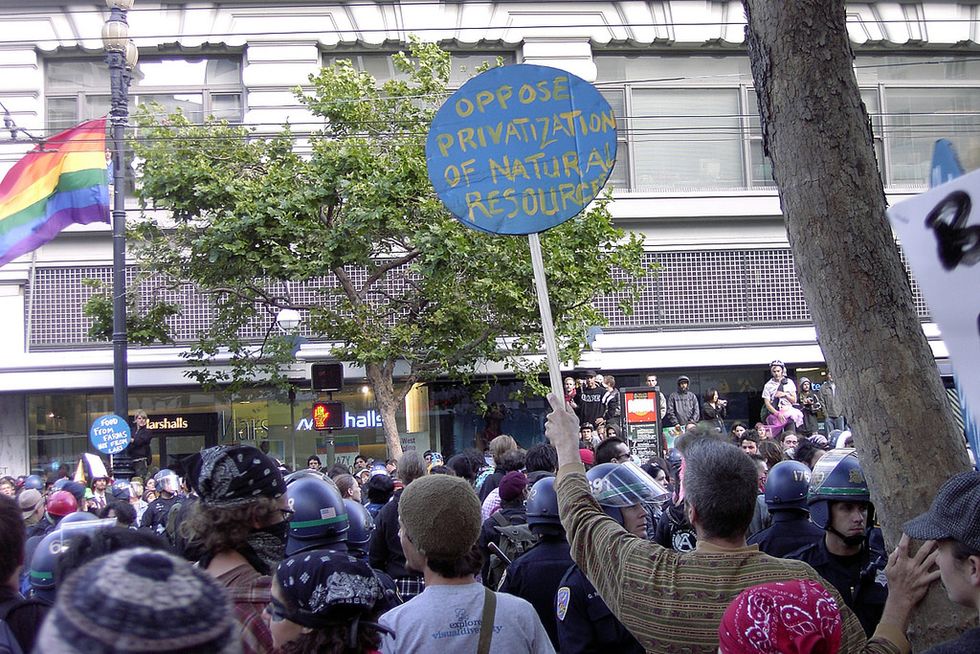 Protesters rally against the biotech genetic engineering industry outside of Bio 2004 , an annual gathering of the biotech-pharmaceutical industry's corporate executives and lobbyists, held at Moscone Center. (Dennis Brumm via flickr) 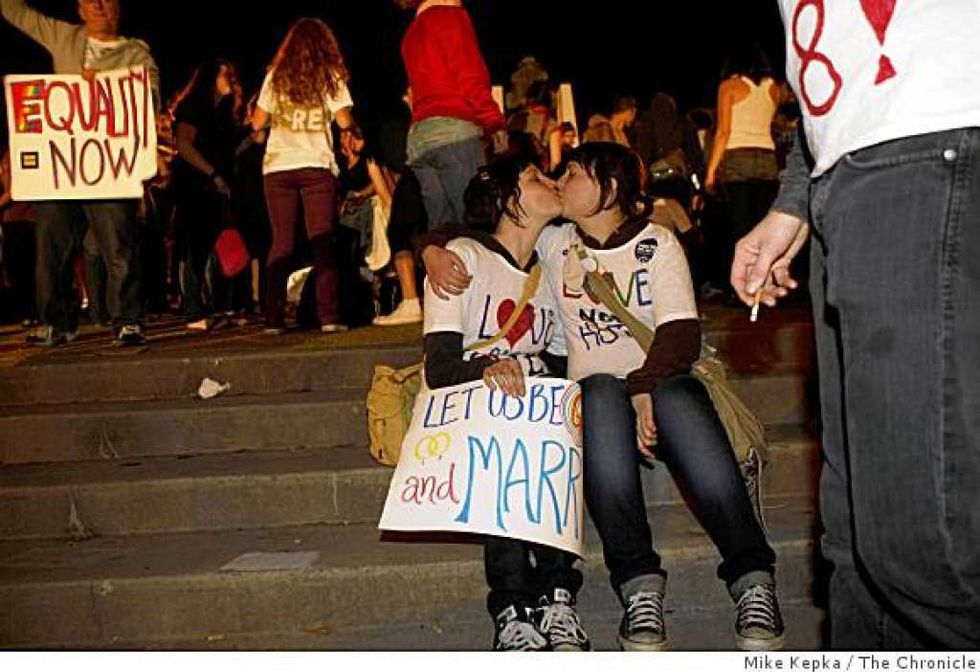 Thousands of demonstrators marched down Market Street in San Francisco in the fall of 2008 to protest the passage of Proposition 8, which effectively banned same-sex marriage in California. (Mike Kepka, The Chronicle) 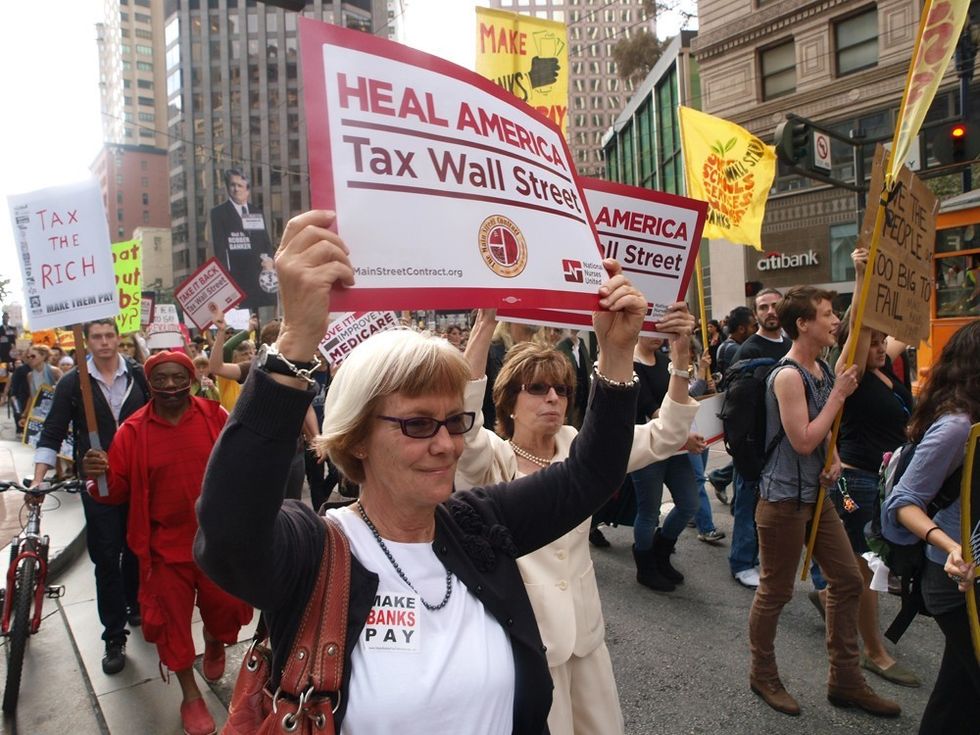 In 2011, protesters rallied in SF's Financial District against big banks as a part of the nationwide Occupy Wall Street movement. The march started downtown at 555 California St. and targeted Wells Fargo, Bank of America and Chase Bank. (Mike Koozmin/The Examiner) 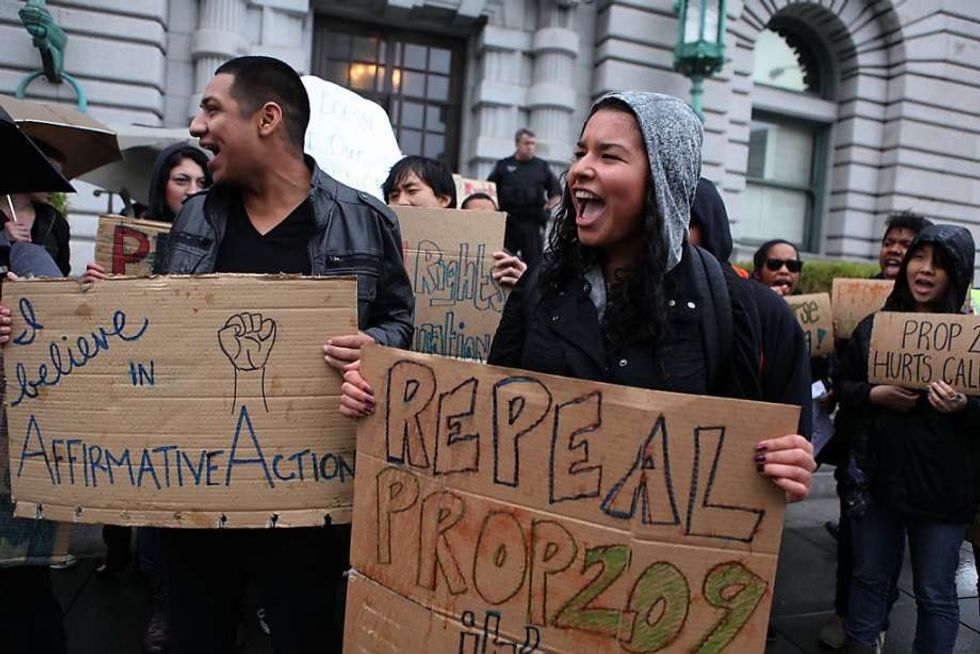 Protestors in front of the Ninth U.S. Circuit Court of Appeals in San Francisco call for the repeal of Prop 209, the 1996 initiative that banned affirmative action. (Liz Hafalia, The Chronicle) 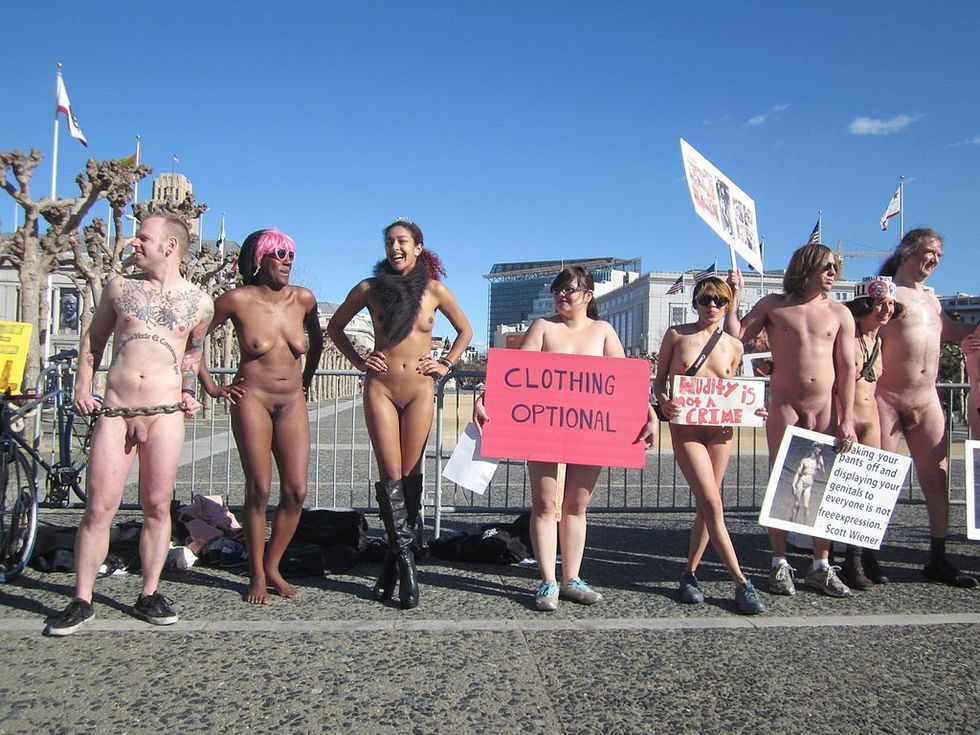 Nude activists participate in a protest against a new ban on nudity in public places. (@sfwheelchair, via Flickr) 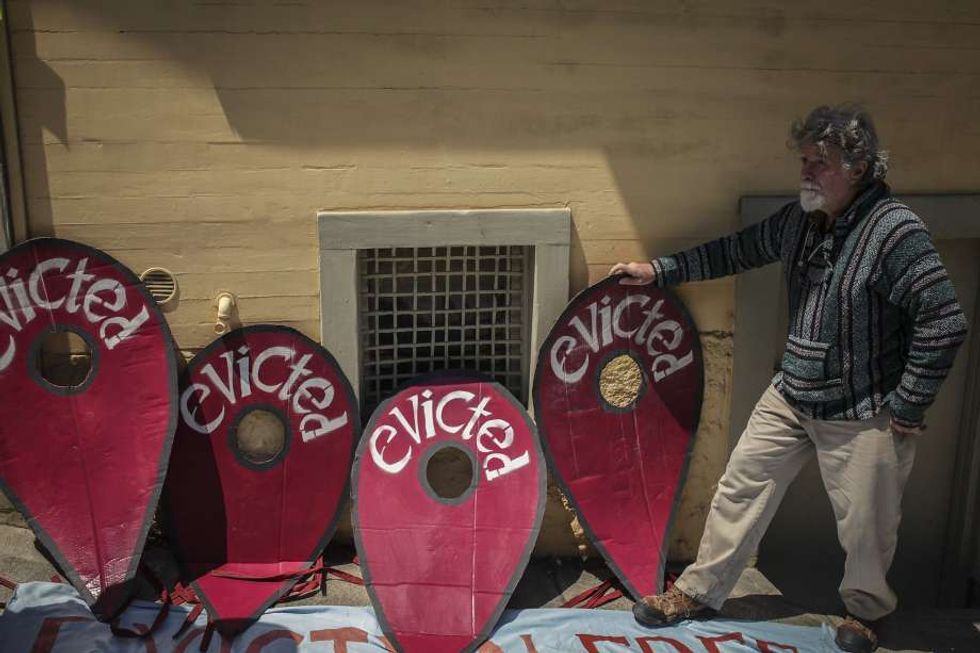 Put on by the San Francisco Tenants Union, Tenderloin residents protested outside a building which had evicted residents in order to convert units into Airbnb rentals. (Sam Wolson, Special to The Chronicle) 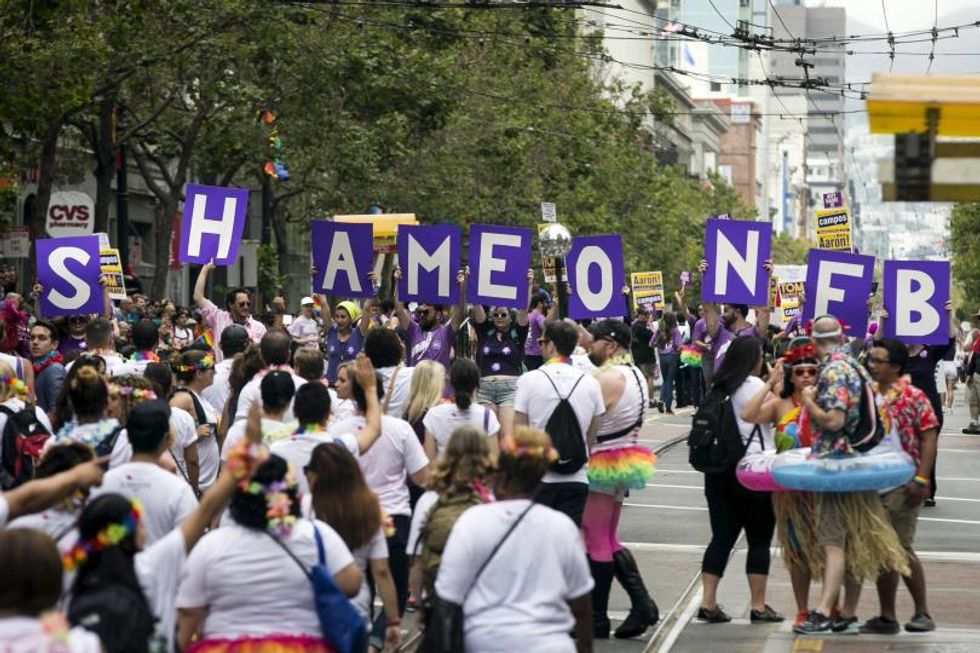 Participants at SF Pride in the summer of 2015 took the opportunity to make a statement against Facebook's "real name" policy, which required Facebook users to register with their birth names, rather than a chosen name—a policy that largely impacted transgender people. (Geoffrey A. Fowler, via Twitter) 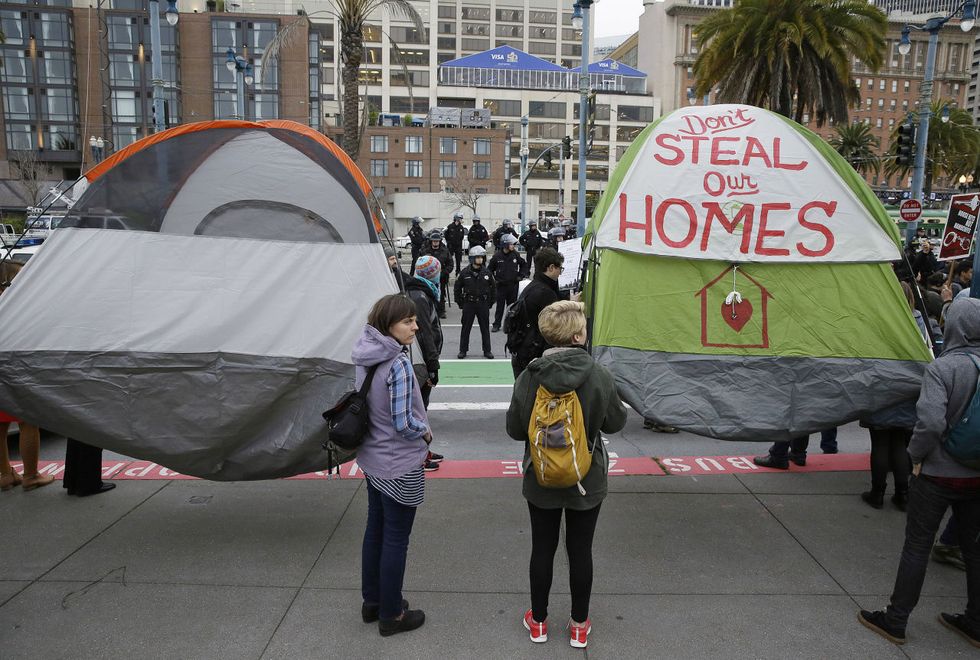 Demonstrators held up tents outside Super Bowl City in 2016 to demand that city officials do more to help San Francisco's homeless, many of whom were displaced in preparation for festivities surrounding the sporting event. (Eric Risberg/AP) 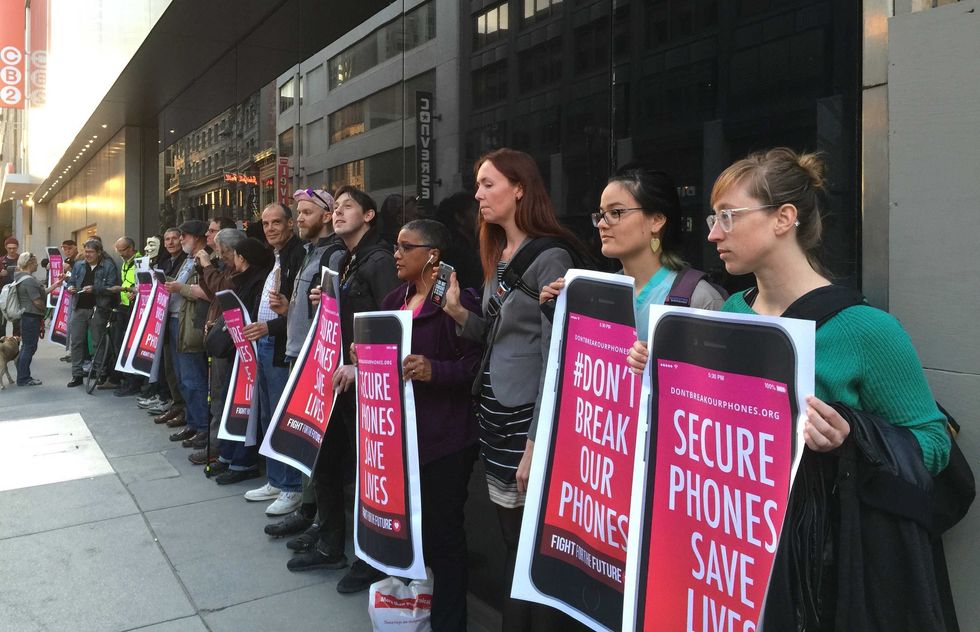 In response to the FBI's demands that Apple unlock the the iPhone of a terrorist shooter in San Bernardino, protesters gathered outside the Union Square Apple store in support of privacy. ( via Cult of Mac) 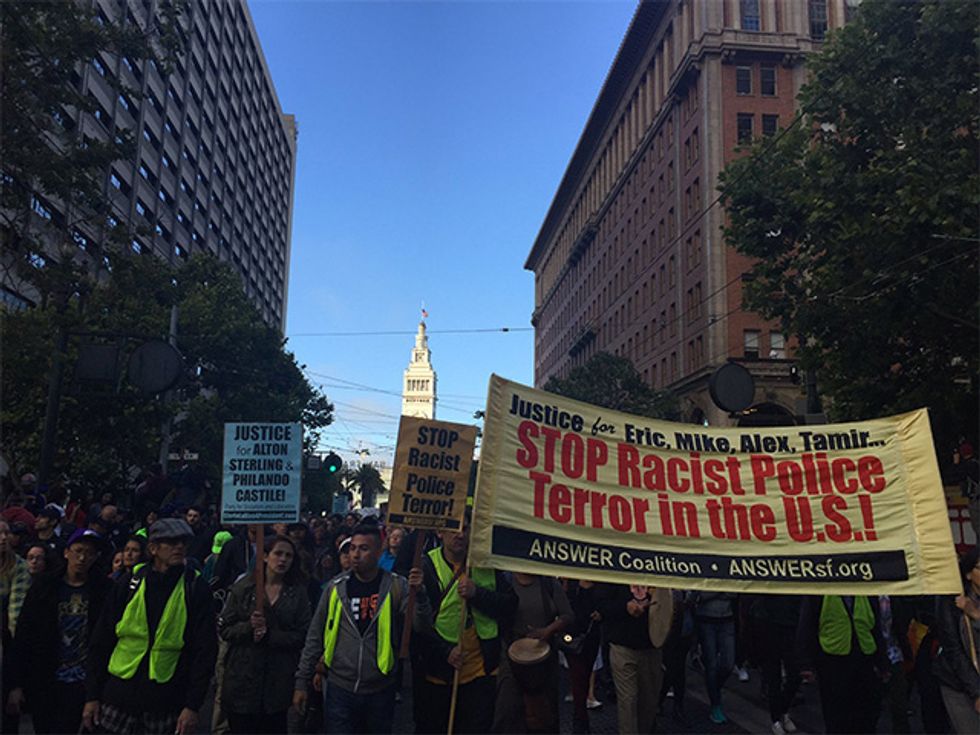 As part of a National Day of Action to End Police Violence Against Black People, hundreds of people rallied in SF, Oakland and other Bay Area cities to draw attention to incidents of police violence and the movement against racial injustices. (Caleb Pershan/SFist) 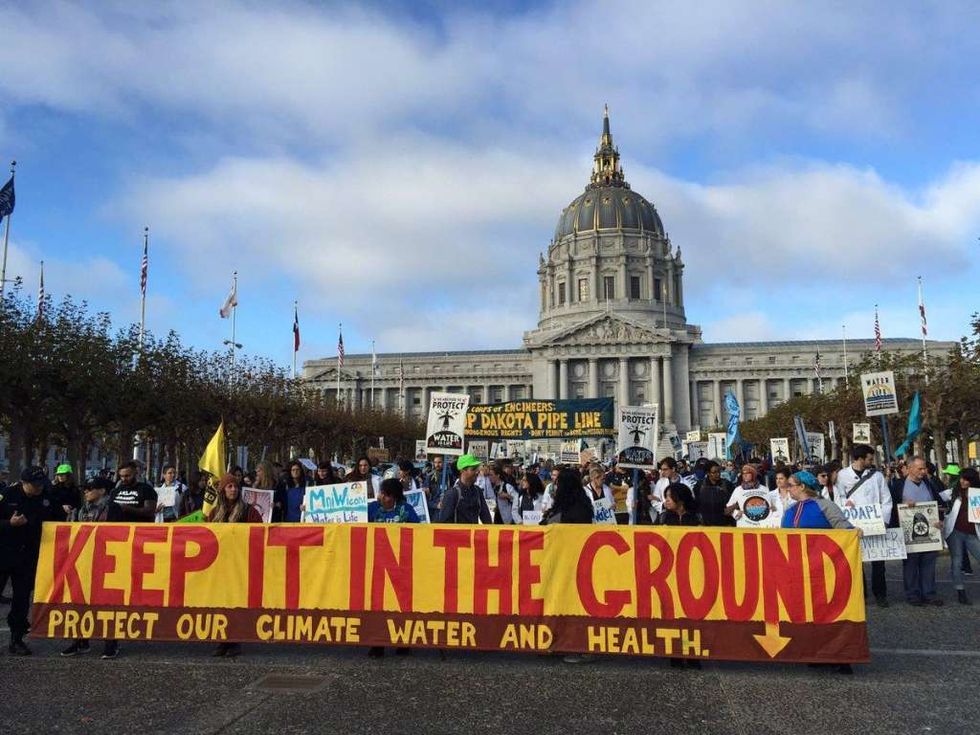 Hundreds of people protesting the Dakota Access Pipeline surged onto Market Street last year, blocking traffic for two hours, while calling for an end to the 1,172-mile crude oil conduit which poses as a potential disaster for sacred American Indian land. (Evan Sernoffsky / The Chronicle) 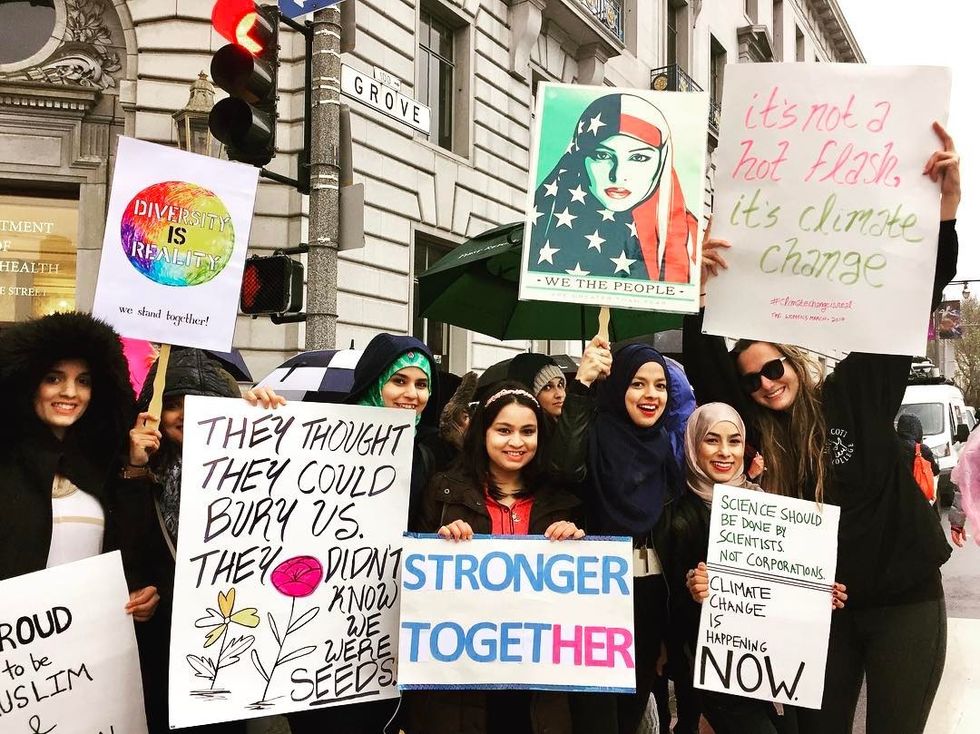 An estimated 100,000 people marched from Civic Center to the Embarcadero for the Women's March on Jan. 21, 2017, which has now shaped up to be the single largest protest in American history with packed-to-the-gills sister marches across the country. (via 7x7)