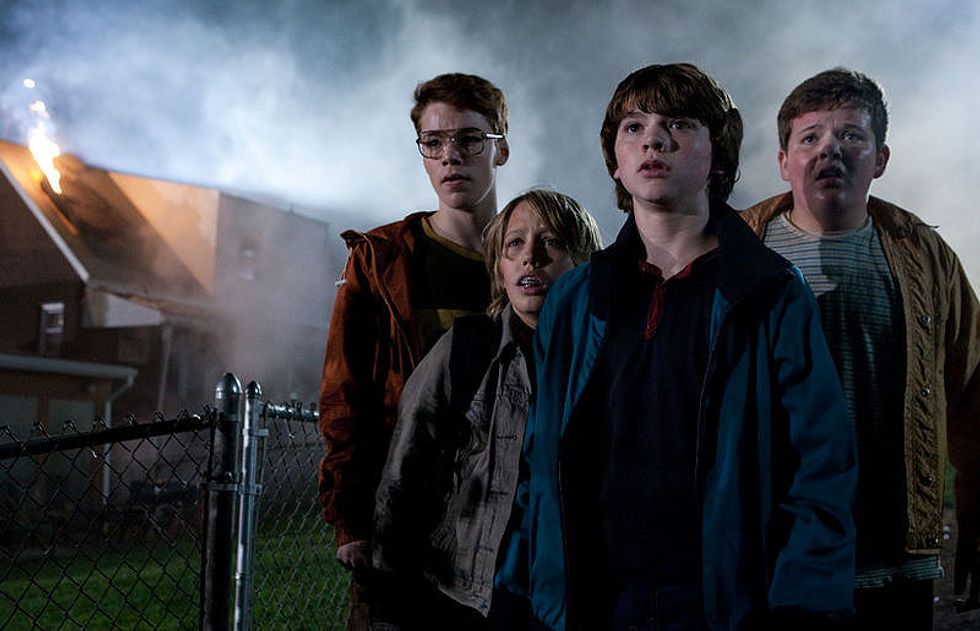 Abrams, Spielberg Pay Riveting Homage to B-Movies of Their Youths with 'Super 8'

The childlike sense of wonder so evident in Super 8 might well spring from director J.J. Abrams’ memories of an adolescent infatuation with monster movies, and his filmmaking as a boy on the long-obsolete Eastman Kodak cameras from which his latest work takes its name.

But try telling that to anyone weaned on Close Encounters of the Third Kind, The Goonies and E.T. Whether Abrams is channeling the spirit of producer Steven Spielberg or paying tribute to his mentor’s most audacious fantasies, Spielberg’s influence on Super 8 is impossible to miss.

That’s hardly cause for complaint. Whether you walk away from Super 8 recalling more the wide-eyed innocence of E.T. (1982) or the Godzilla-like chaos of Cloverfield (2008), which Abrams produced, chances are you will do so with a bounce in your step.

Super 8 must have been a welcome nostalgia trip for Abrams and Spielberg, both of whom experimented with the format as young filmmakers. It is a movie driven as much by a passion for the creature features of the ’50s and ’60s as by a healthy appreciation of the joys of youth – the heady rush of first kisses, and the beginning of adolescent rebellion.

Abrams has been notoriously tight-lipped about the movie, and it would be mean-spirited to reveal all his secrets. Set in small-town Ohio during the summer of ’79, Super 8 follows a group of middle-school moviemakers – including overbearing director Charles (Riley Griffiths), makeup expert Joe (Joel Courtney) and talented starlet Alice (Elle Fanning) – who capture a mysterious train wreck on camera.

It’s not long before the Air Force arrives to clean up the mess, but their presence is anything but benign, as Joe’s sheriff father (Kyle Chandler, of NBC’s Friday Night Lights) comes to suspect. Could the train’s unusual cargo – hundreds of tiny white cubes, packed in dozens of heavily guarded crates – explain the military’s curious fascination?

Panic ensues, coupled with alien sightings and an increasingly tense fact-finding mission orchestrated by Joe, who rightfully concludes that there’s a lot more going on behind the scenes than the Air Force cares to let on.

None of this is exactly fresh – Super 8 pays homage to venerable sci-fi clichés and revisits territory Spielberg has covered before. But what’s so refreshing about the movie is how effortlessly entertaining it turns out to be. The plot’s well-oiled engine practically purrs.

Like Spielberg, Abrams, at his best, has a skilled musician’s ear for his audience. Even when the notes are familiar, it’s a pleasure to hear them fall into place with such serendipity.