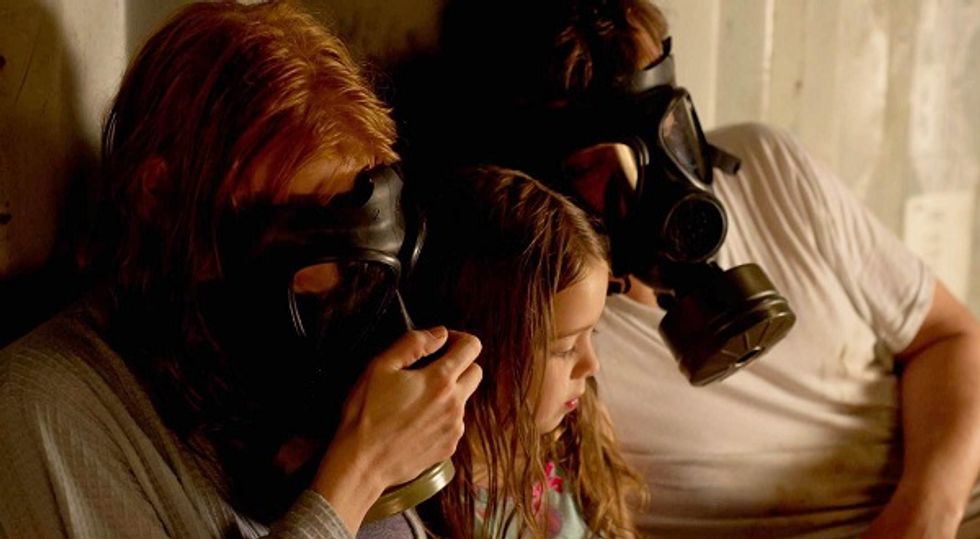 There’s a storm coming. Curtis LaForche can sense it. More ominously, he can see the dark clouds gathering, hear the deafening claps of thunder, feel the torrential downpours as they drench him with an oily rain. Is he the only one who can? Curtis has every right to wonder. Around the same age, his mother was diagnosed as a paranoid schizophrenic.

Curtis suspects he’s headed down the same path. He is given sleeping pills to ward off his nightmares, in which everyone – his neighbors, his wife, even the family dog – tries to tear him to shreds. He recounts his fears to a counselor at the free clinic, but even at his most lucid he believes the visions are no mere delusions. Why else would he get rid of his dog and part with his closest friend?

And then there’s that subterranean bunker, the storm shelter in his backyard. Curtis feels compelled to fortify it, taking out a loan on his home and investing his family’s savings in a project that becomes an obsession. Why? his wife asks. “I’m afraid something might be coming,” he stammers, struggling not to sound crazy. “Something that’s not right.”

Michael Shannon plays Curtis in Take Shelter, the astonishing drama from Shotgun Stories director Jeff Nichols. Shannon has gone unhinged before – as a stressed-out Gulf War veteran in Bug (2006) and a recovering mental patient in Revolutionary Road (2008), for which the towering actor earned an Oscar nomination.

He’s entitled to another for his performance here, as a father desperate to protect his wife and daughter – but from what? Is there really a storm on the horizon, or has Curtis simply checked out, overwhelmed by his obligations as the man of the household? Curtis doesn’t know, and neither do we. But his actions speak for themselves.

There is a sensitivity underlying Curtis’s madness, as he races against time to do what he must. When he erupts, dispensing with the calculated calm he presents to family and friends, and bellowing prophesies of doom as if to the heavens, he breaks down and weeps. Foresight is his curse, the burden he bears because he has no choice.

His wife Samantha (Jessica Chastain) doesn’t understand – how could she? But, to her credit, she doesn’t dismiss his concerns as lunatic ravings. She listens, accepts and does what she can to save her marriage.

Hers might have been a thankless role, the worried wife confounded by her husband’s increasingly erratic behavior, but Chastain does some of her best work here (after strong supporting turns in Tree of Life, The Help, The Debt and the upcoming Coriolanus). Like Shannon, she can dominate the screen with a look, and though he looms like a giant beside her, Chastain is equally imposing.

We never get the sense that Curtis and Samantha are a typical movie couple. Their disagreements are frequent, yet never trivialized. Apocalyptic premonitions aside, they face the same problems many others do, and handle them together, with a pained authenticity that permeates the film.

The visions are, of course, open to interpretation. Taken as a metaphor for America’s frightening approach to financial ruin, or even as a supernatural yarn worthy of Stephen King – backed by impressive effects, true-to-life nightmare sequences and David Wingo’s haunting score – Shelter is moody, riveting entertainment, a brilliant encapsulation of widespread anxieties.

But most of all, this is the story of a marriage put to the ultimate test, an illustration of how trust is gained, how compromise is required, and how sometimes the best thing you can do is cast your judgments aside and listen with an open mind. As a dark fantasy, it is terrifying. As a drama about the powerlessness of a young family to survive a rising tide of bills and calamities beyond their control, it is a powerful experience not soon forgotten.