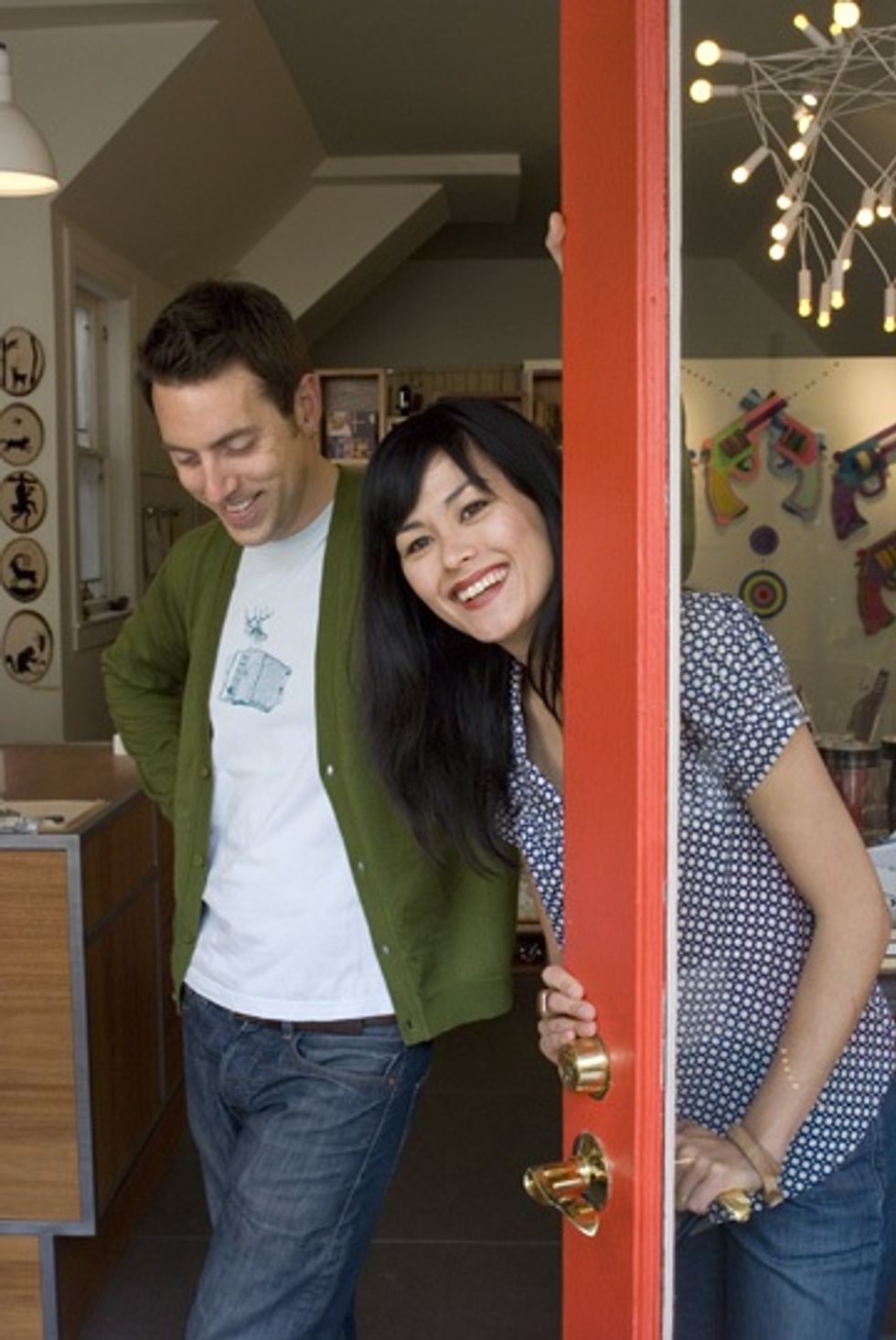 Talk about a power couple: Derek Fagerstrom and Lauren Smith fearlessly helm both the adorable, creatively-curated Curiosity Shoppe on Valencia St. and the city's feather-ruffling new media experience Pop-Up Magazine as creative directors. Their biggest and most exciting project yet? Read and find out!

How and when did you two meet?
DEREK: We met when we were 18 year old kids at UC Santa Cruz. We ended up collaborating on a project for a class about museum curating, and we haven't left each others side since.

How did the ideas for each come about, and how do you collaborate on each?
DEREK: We came up with the idea for the Curiosity Shoppe when we were still living in New York. I was a magazine editor and Lauren was working for the designer Todd Oldham. Being in those industries we made a lot of friends who were artists and designers and we thought it would be a fun to open a shop that celebrated their work. We had also been curating art shows and events since our days in Santa Cruz, so we wanted to make sure we had a gallery space as well.

LAUREN: Pop-Up magazine was something our friend Doug McGray had been thinking about for a while. With Derek's background in magazines and our experience curating shows and events, it made a lot of sense for us to help make Pop-Up happen.

Tell me a little about working at the Curiosity Shoppe together, as opposed to Pop Up. Which is more hectic? Which causes more fights, or more respect between the two of you?
LAUREN: The Curiosity Shoppe is a true Mom & Pop operation and requires a lot more hands-on day-to-day maintenance. We do everything from sweeping the sidewalk, to buying, website upkeep, merchandising, bookkeeping, curating gallery shows, PR, etc, etc, etc.... We have 2 wonderful employees that keep us sane, but there's always more to be done.

DEREK: Pop-Up is like most magazines in that we do a lot of constructive thinking, planning, and meeting between issues, but it doesn't get super nutty until a couple weeks before the actual show. And it's funny, a lot of people ask us how we can live and work together without killing each other, but it really seems like to most natural thing in the world for us. I value Lauren's opinion more than anyone's.

What's it like having so many literary big-wigs fawn over Pop-Up Magazine?
DEREK: I think one of the things that makes Pop-Up so interesting to work on (and so fun to see live) is that it's a unique opportunity for a diverse group of fascinating people to get together in one place to share their passions and their projects. And I think it's natural that intelligent, curious people would be excited about participating in that either as a contributor or audience member.

What do you do to get away from both these businesses, or even from each other, since with two projects like these, you must need alone time?
DEREK: Since we live and work together, to really "get away" from our work we kind of have to really get away. We have family around the Bay Area so we'll head out of town to see them, or go camping, or on little day trips. Sometimes just leaving Valencia Street feels like an adventure.

LAUREN: And even though we do a lot together, we both have our little projects and obsessions that we enjoy exploring on our own.

Do you have any new projects planned for the future?
LAUREN: We've got a Pop-Up Sidebar planned in collaboration with the SFMOMA on March 17th, and a couple other Pop-Up's on the horizon: New York in May, and back in San Francisco at the Opera House in June! Our other big project (perhaps our biggest project yet!) is a baby that is due any day now!

Any advice for couples who own businesses or run serious creative endeavors together, or are thinking about it?
LAUREN: If you have a strong relationship, there's nothing more rewarding than collaborating with your partner or spouse. But if it doesn't go like you planned or you find your relationship strained, drop it. No business or project or creative endeavor is more important than love.