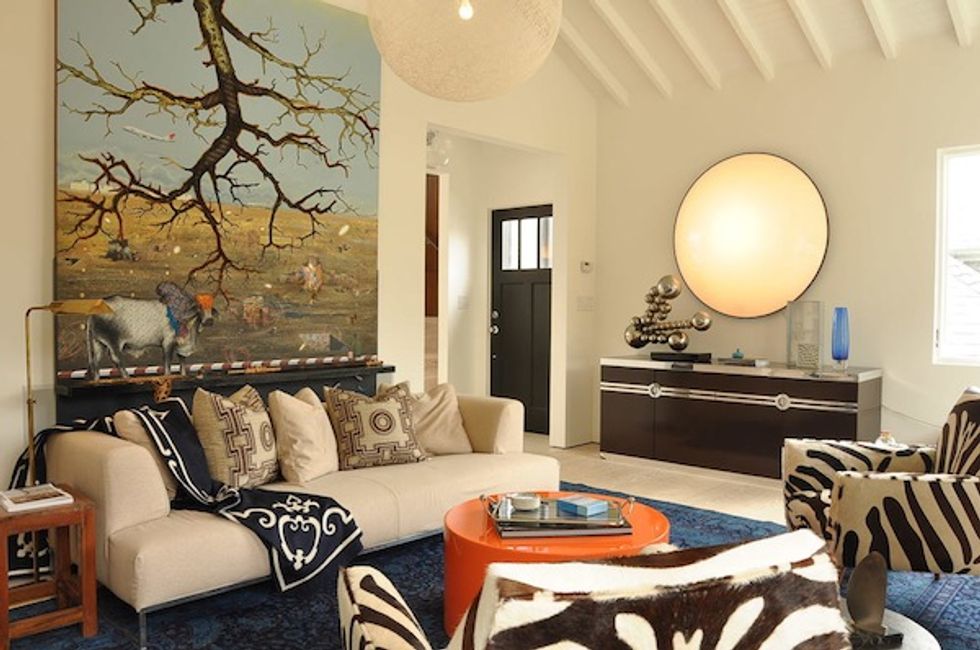 When interior designer Ian Stallings set out to furnish this Noe Valley house, he was facing the challenge of his career. His young clients had recently purchased the home and moved in with just a chair, a dining table, and a bed between them. After living in the empty rooms for a time, and undergoing a few false starts, they decided they wanted to get it done—fast. They were leaving town for four days, and they hired Stallings to complete the project in that time. This is the equivalent of asking a designer to move at the speed of light.

To complete the job quickly and have it look like more than a real estate staging project, Stallings tapped into the couple's history and relied on high-quality, but readily available, furniture and art. He knew that the couple loves travel, so he chose accessories with a global ethnic vibe. He mixed off-the-shelf pieces with statement art to give the rooms depth and character. As a fine artist himself, Stallings gravitates towards art. Here, he set the stage  with Jagannath Panda's surreal "Alpha Epic II."

The couple purchased the house from an architect owner who had remodeled it to his specifications, including a wall of bookshelves. Being more prone to reading on screens than on paper, Stallings' clients didn't have any books. Stallings chose to fill the shelves with items the couple would identify with, using a "cabinet of curiousities" approach. In Renaissance Europe, such a cabinet primarily held natural history collections. Using that idea as a springboard, Stallings selected everything from butterflies to eggs to rock specimens for the shelves.

A vintage, illuminated wall sculpture rises like the moon over a sleek console and a modern sculpture.

The kitchen was complete, but Stallings added local artist Sharon Beals' photography of bird nests and globe-like lights. "The house was very modern," says the designer. "I wanted to soften and warm it up a bit, to keep it from feeling like a cold, sterile space."

With that philosophy in mind, Stallings chose comfy, you-just-want-to-sink-into-them swivel chairs to flank the fireplace behind the kitchen island. "The idea is you could relax here and chat with someone in the kitchen," says Stallings. "Sitting here, you can face the kitchen or turn to face the fire."

Stallings used the same warming strategy for the dining table the clients owned. By itself, it would be a hard surface in an environment of hard surfaces. But with an Ikat rug underneath it, geometric placemats, and napkins custom-sewn from Japanese fabric (each one has a different pattern), the space comes alive. "Someone once told me you can't use blue in a dining room because it makes things unappetizing," says the designer. "I'm not always a rule breaker, but when someone says something like that, I just have to do it." Clearly, the old decorator's rule of thumb doesn't hold water here.

Below the kitchen, the media room/gym/home bar is outfitted with plenty of seating. "The sofa and the ottomans are easy to move," says Stallings. "We wanted this space to be flexible. The sofa also fits together to become a bed, if they need extra places for guest to sleep."

A statue of a on-guard sumo wrestler crouches under the staircase. "He's perfect for that zone," says Stallings. "He's right by the workout equipment—and because he's bending over, he fits right under the stairs. Most importantly, he adds a fun touch to the room."

Upstairs, the master bedroom is like an island of tranquility. A low bed is centered in the middle of the room, allowing it to be positioned in front of a fireplace. A vintage, domed lamp on a Milo Baughman side table adds a cool element to the room.

The finished product is an interior that straddles old and new. "The outside of the house is more traditional," says Stallings. "It was built in the 1900s; so the ecletic look was fitting."