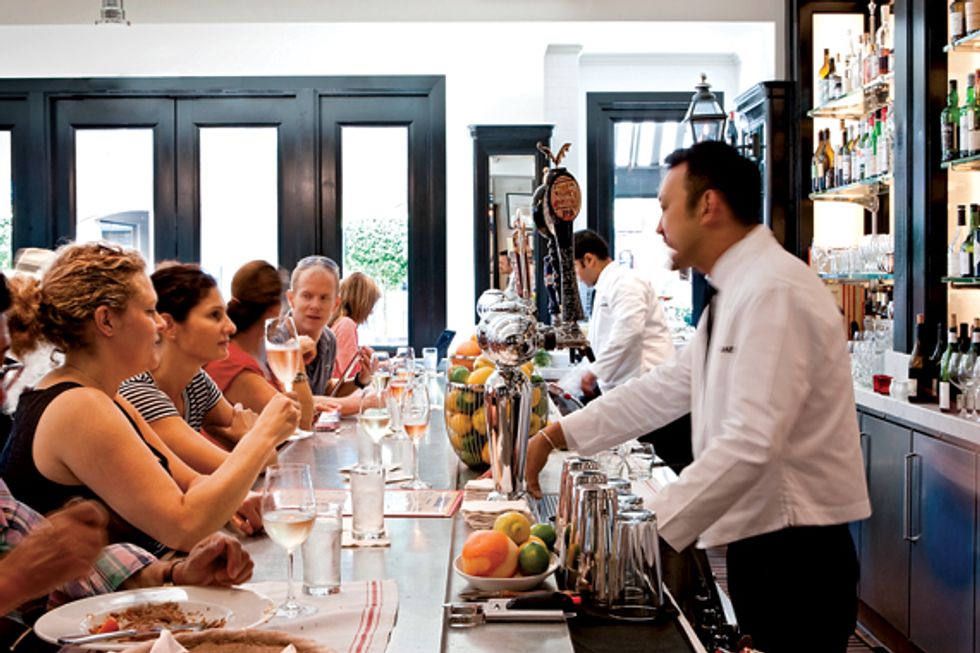 With the back-to-back openings of Benu, Wayfare Tavern, and Prospect, it’s clear that the city had been waiting for the worst of this hand-wringing recession to pass before exhaling all of its spendy restaurants in one big sigh. And it appears San Francisco’s diners barely blinked before enthusiastically making a reservation.

Café Des Amis is the latest to enter this fray. Brought to us by the Bacchus Management Group—owners of Spruce and the Village Pub in Woodside, a team that has the classy, if conservative, thing down pat—Café Des Amis was made all the more buzz-worthy because of the anticipation drummed up in the three years it took to open. Located in Cow Hollow, right next door to the ever-popular Betelnut, it’s on its way to becoming the neighborhood’s new anchor.

I won’t be the first to tell you that this is a restaurant aiming to be the Balthazar of the West Coast, but it’s something that can’t be ignored. Black-lacquer accents with a deep red private dining room clearly emmulate Keith McNally’s Manhattan concept, right down to the design of the menu.

Here you’ll find a well-heeled crowd that likes marble tables, sparkly chandeliers, and other trappings reminiscent of Paris, including the best seat in the house—a zinc bar brought in from France. What lies behind it is a thing of beauty: A wall stacked with beautiful high-end spirits and bartenders wearing classic white boxy jackets, briskly shaking cocktails, and serving tastes of sparkling rosé. On the adjacent wall are cabinets stocked full of wine from a list that leans, not surprisingly, toward France and includes bottles from the more obscure regions like Vezelay and St. Peray. Don’t be surprised if you find yourself starting with an aperitif, ending with a digestif, and drinking a lot of wine in between. When at an American restaurant that’s emulating a French one, do as the French do.

The food is cooked by executive chef Ed Carew (overseen by chef and partner Gordon Drysdale). Carew has roots at Gramery Tavern and Craft, and his menu is a study in Gallic best hits—French onion soup, salade Niçoise, steak frites—along with the requisite American addition of a burger (with an egg). Dinner might begin with oysters and potted chicken liver pâté and move on to roast chicken ballotine or grilled sausage with lentils du puy. The pièce de résistance is a 24-layer crepe cake, sandwiched with apricot jam and whipped cream. Don’t go home without it.

Unless you stick with the burger and a glass of Champagne (always a good choice), prices can get up there—all the way to $85, the cost of côte du boeuf for two. Considering the number of people who were waiting for a table one night, I have to assume this kind of rustic opulence has more than a few takers. Should you want to escape the city’s current trend of reclaimed wood and counter service—even for a moment—Café Des Amis aims to  provide every excuse.