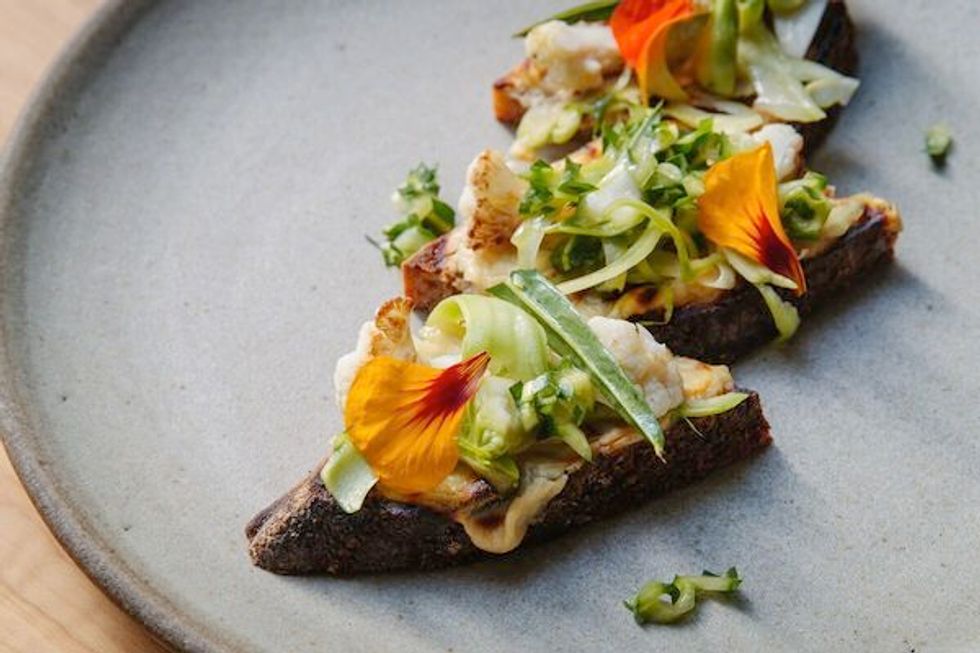 Can The Perennial Really Be the Most Sustainable Restaurant in the World?

When one hears of the mission behind The Perennial—essentially to be The Most Sustainable Restaurant in the World—it’s easy to write it off as the kind of startup hyperbole that's become so prevalent in San Francisco. Seriously, if we had a dollar for every industrious foodie or techie who swears her idea will change the world, we could buy stock in Apple and move to Hawaii. But skeptics as we are, we love to root for our home team. And the folks at The Perennial seem to have the stuff to pull it off.

Behind the lofty ambition lies a team with quite a track record: Anthony Myint and wife Karen Leibowitz are the founders of Mission Chinese Food, its various satellite restaurants, Commonwealth, and more. He has been named to pretty much every top, most, or hot list you can think of in food world. Most influential. Empire builder. Hot 20. Top 40. She's his restaurant partner, as well as a food writer with credits in Modern Farmer, Lucky Peach, The New York Times, and Food & Wine. You get the picture.

And so, these Midases of the SF restaurant world have set out to build a restaurant that aims not to be an example but rather the paradigm for environmentally friendly food service. Described by the duo as “progressive agrarian,” the restaurant takes sustainbility well beyond the ubiquitous reclaimed wood (which you'll see here in the form of fallen redwood–clad walls) and recycled materials (in the clay tiles that line the bar). No, the team behind The Perennial is looking at sustainability through a very long lens, beginning with the construction of their 2,000-square-foot aquaponic farm in West Oakland.

Right. So aquaponic farming is amazing in that it creates a closed-loop food system: The restaurant will turn its compost into food for fish, whose waste in turn becomes fertilizer, which helps to grow plants, which are then delivered to The Perennial to be incorpated into recipes. The process is about six times more productive than traditional soil-based agriculture and uses one-tenth the water. Once buildout of the facility is completed later this month, The Perennial’s closed-loop system will reduce food waste and lower their carbon footprint.

(In addition to serving beer and wine, The Perennial offers interesting cocktails including the Shaddock Rose (center: tequila, grapefruit cordial, and bitters) and the Marmalade Cobbler (top left: Alvear amontillado and grapefruit marmalade).

But to be the most environmental restaurant ever, it can't stop there. Lowering one's carbon footprint is very nice and all, but what if a restaurant could actually help to reverse the effects of climate change? Enter the kernza grain, a perennial (get it?) whose deep root structure is believed to pull carbon dioxide out of the atmosphere, promote healthy soil, and mitigate drought conditions. As it turns out, kernza also makes for some absolutely delicious bread.

That brings us to the food. Because let's be honest, the sustainability angle is novel and worthy of our first visit, but if it isn't delicious, we're not going back. “Food and beverage are equally top priorities as the environment,” Leibowitz maintains. "It has to be top quality."

And the food here is wonderful.

Myint and Leibowitz have enlisted Chef Chris Kiyuna, whose credits include both Coi and famed Noma in Copenhagen (the man knows his veggies). Kiyuna has brought the new-Nordic minimalism and technique with him in dishes like the pumpkin seed bisque: Made from cardamom-infused pumpkin milk, the soup is poured tableside over a bowl of sunchokes prepared three ways (fried, diced raw, and pureed), and is finished with a hint of lemon oil and thin slices of pear for brightness and sweetness. Not only is it a lovely start to the meal, it might be The Best Soup in the World.

Another standout starter is the potato confit with clam bagna cauda, which, while delicious, feels a tad pricey for its few poached potatoes, couple of clams, and adorable baby radishes. Meanwhile, a dish of crisp and tender grains—steamed faro, barley, and millet—is warmed up with a buttery sauce, mushroom stock, and a slightly funky comté cheese. It's all topped with grilled artichokes, sautéed black trumpet mushrooms, and toasted crispy buckwheat. If it sounds a bit hippy, it totally is—but we haven't stopped thinking about it since.

For a restaurant that's into its fish, we were surprised that the entree of McFarland Springs trout was a miss: Though perfectly cooked with skin crispy and flesh flakey, the salt was heavy-handed and the bone marrow broth tasted less rich and marrow-y than one would hope. But all was made well again with the lamb shoulder, braised until fork-tender and served on a bountiful bed of brassicas with brussels sprouts and roasted romanesco, all drizzled with a glossy demi reduced with black garlic and mint—a dish so well considered, complete, and satisfying.

“We’re not trying to be a Pellegrino list restaurant,” Kiyuna says (S. Pellegrino sponsors the World's 50 Best Restaurants awards annually). “But we’d love to raise the floor and hopefully be something of a role model when it comes to ecological practices.”

Dessert options are equally fresh and imaginative: Go for the surprisingly creamy nasturtium ice cream, served with dehydrated and fresh kiwi as well as toasted pecans. If you prefer to drink your finale, the restaurant's take on the pisco punch has a boozy pineapple sherbet and a crunchy cancha topping (think Peruvian popcorn).

In the end, The Perennial succeeds at serving delicious food and at bringing the conversation of environmental sustainability to the front burner on the San Francisco dining scene (and perhaps beyond). Will Myint and Leibowitz change the world? Time will tell. But what's the measure of success?

“If, in 10 years or so, people go to grocery store and have an option of vegetables grown from an aquaponic farm," muses Myint, "then we’ll know we’ve been successful.”