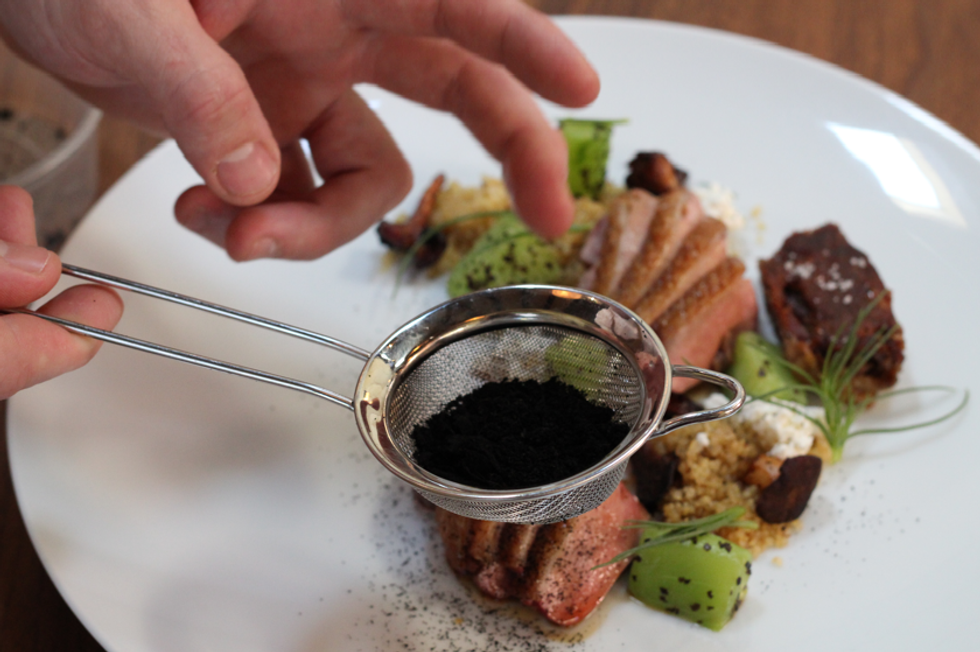 Chefs Have The Hots For Ash In Fancy Dishes 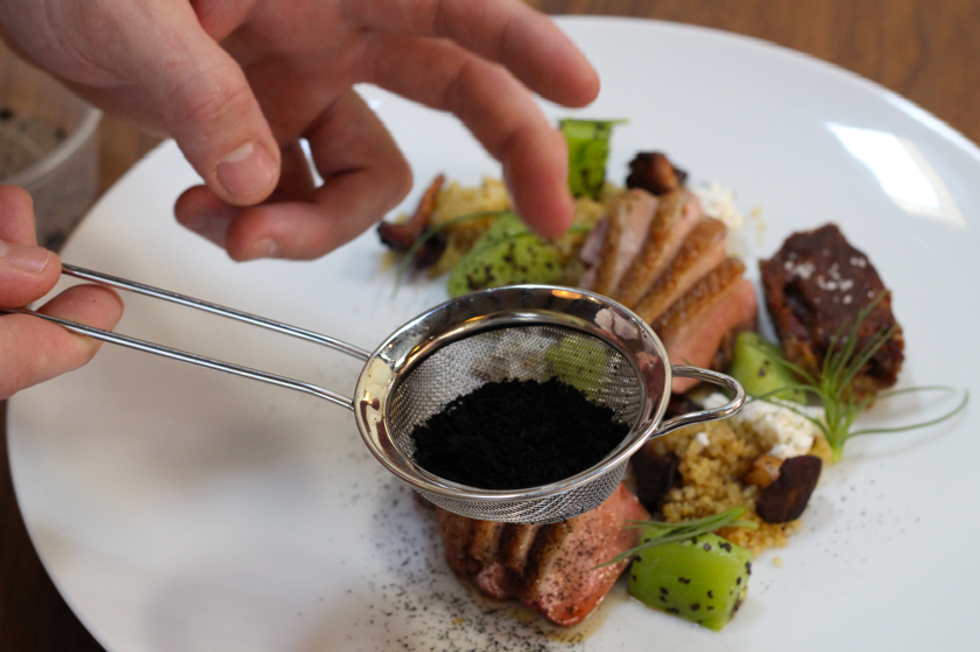 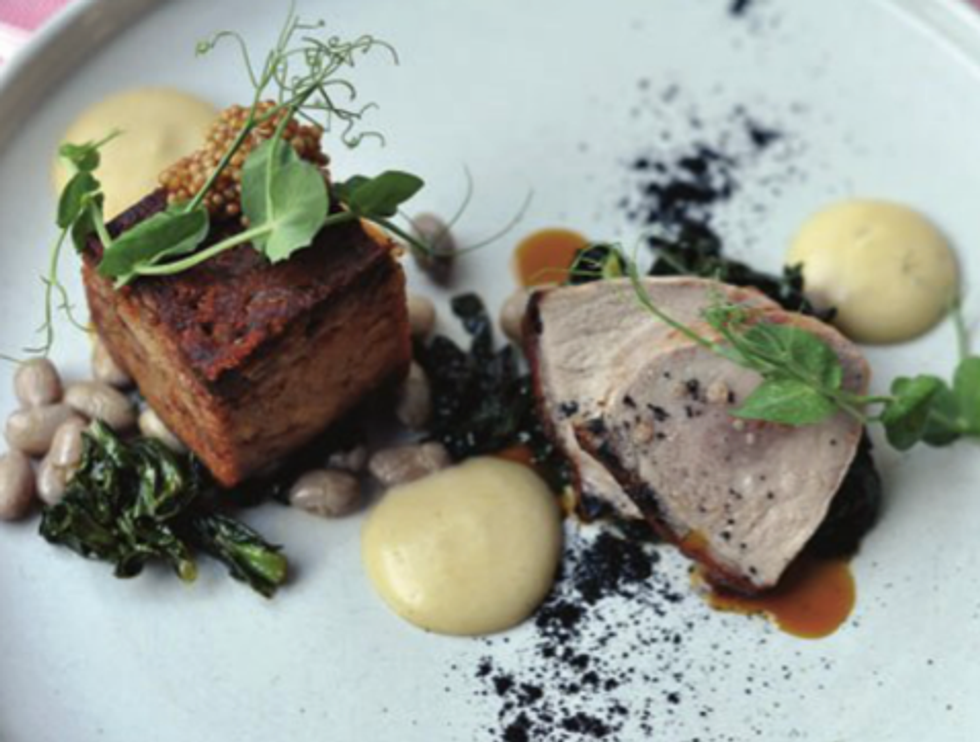 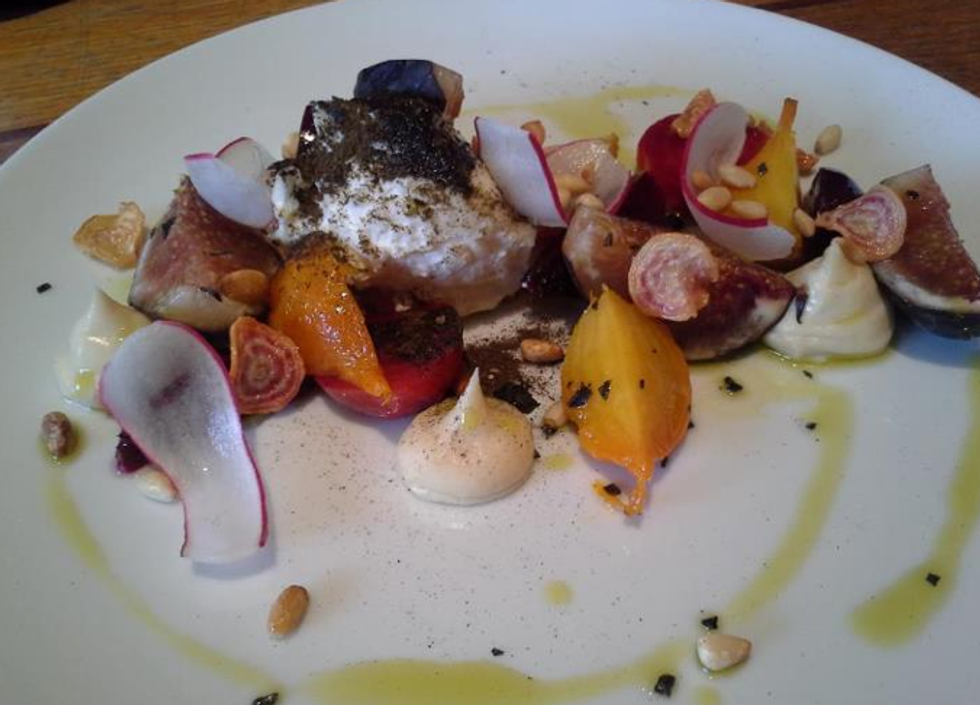 Will 2012 be remembered as the year of ash? Chefs at hot San Francisco restaurants like AQ, Central Kitchen and Maverick are using ash in their cooking with increasing regularity. They'll deeply char everything from corn husks to wood and vegetables, using the ashy byproduct to create intricate flavor on the plate. The technique isn't a new thing. Native Americans were using ash cooking centuries ago, but they certainly weren't touting its dramatic effects like today's cooks do. We asked the chefs from some of the hottest restaurants in town why they're putting ash on your dinner plate tonight. Here's what they had to say.

Chef Thomas McNaughton sprinkles borage dust on his duck with smoked quinoa and grilled chanterelles just before sending it out to the dining room at his brand new Mission restaurant. To make the "dust," McNaughton puts borage leaves directly onto the coals of the kitchen's grill, charring them and then grinding them up in the spice mill. McNaughton likes the texture and slight bitterness the borage ash brings to the dish, describing the flavor as "thought-provoking." He also uses ash made from onion tops in the vinaigrette for the menu's petrale sole with spring vegetables, lemon and almond. "It's a great way to use up by-products from vegetables that wouldn't necessarily be used otherwise," he says.

Chef Mark Liberman encapsulates the flavors of summer in his barbeque pork with shelling beans, cornbread, mustard ash and Tuscan kale. He says adding ash allows him to incorporate bold flavors like horseradish into dishes in a new way. Liberman also plays with texture throughout his menu, and ash is a great tool to that end. Sometimes he'll even add whole seeds to ash to create crunch. For this particular pork dish, the mustard ash contains charred onion, celery, fennel and mustard seeds that are then ground into a powder. "We don't have a grill at AQ, so adding ash to a dish allows us to get a charred flavor."

The Mission's seven-year-old Maverick has a new chef, Emmanuel Eng, who has infused the menu with new creativity. His beet and burrata cheese salad contains a hunk of burrata covered in fig leaf ash, accompanied by Zante grapes, pinenut butter and radish. Eng roasts the fig leaves until black, then crumbles it up to create the ash. He explains the origin of the technique: "Traditionally, in the Loire Valley in France, cheeses are covered with oak charcoal to mellow acidity and to help the surface be more hospitable to the growth of molds that add to the complexity of flavor. The fig leaf ash has a mellow bitter taste that is slightly sweet, very similar to that of cocoa powder, and has a strong aroma of grilled fig leaves. I like the flavor because it plays nice counterpoint to the Zante grapes and beets which can be quite sweet."