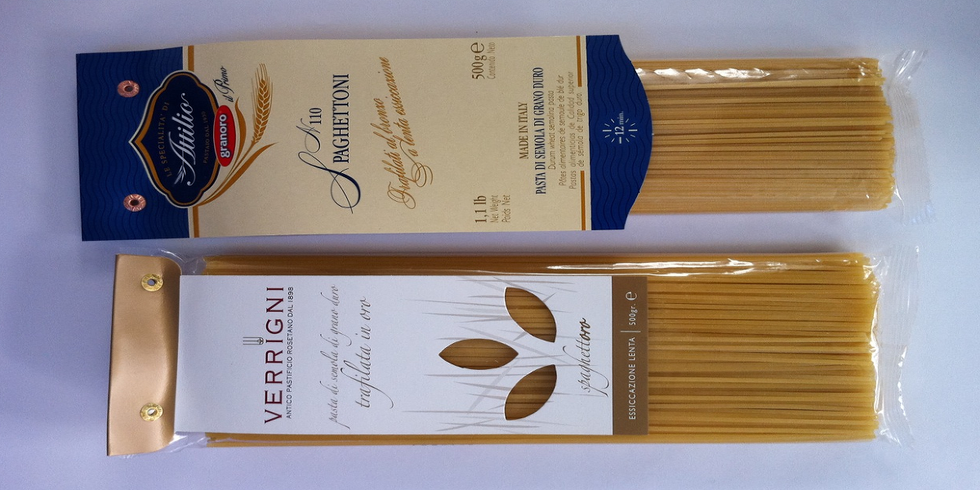 With all the Italian restaurants continuing to open in San Francisco, I've been talking shop with some of the city's best chefs. Particularly, about dried pasta.

Should you think dried pasta is inferior product, think again. Dried pasta is used very specifically for preparations such as carbonara. No self-respecting Roman would be caught dead with a bowlful of carbonara made with anything else. It's a dish that calls for spaghetti with a backbone!

Pasta isn't all created equal though. I found out that it isn't just extruded through anything—some of it is extruded through gold. And if that's not fancy enough for you, there are dried pastas made with a single variety of wheat. (I see the future and it's menus with pasta dishes labeled as being made with "organic, single-plantation, single varietal" wheat.)

Howard Case the importer behind Casa de Case is the guy all the chefs in town call for their Italian products. He sells Granoro pasta to the city's top restaurants, including Zero Zero and Barbacco. Attilio is Granoro's top-of-the-line, and Case says that Barbacco goes through cases of their paccheri, which are big tubes. (Find it at Avedano's.)

Meanwhile, chef Michael Tusk of Quince and Cotogna says, "I have a lot of favorites [when it comes to dried pasta], but I tend to order certain shapes from certain producers. As far as brands, I like Pasta Latini Senatore Capelli, which is made from a single wheat. I also like the Faella brand which is also carried by Gustiamo. Another one I like—Verrigni pasta from Abruzzo, which uses organic semolina—is starting to enter the marketplace."

Chef Anthony Strong—who's been working on making his own hand-extruded  pastas in preparation for Delfina's new restaurant Locanda to open— says, "We love Rustichella d'Abruzzo at the restaurants, which is available all over the place retail these days. My favorite is their garganelli  . The total splurge pasta is Cipriani. Their tagliarelle is one of the most amazingly-textured pastas ever. Mindblowingly thin, it cooks in just a couple minutes. Supposedly there are 7 eggs in every kilo, and it's run through rollers endlessly so it ends up being a very delicate product. Any time I've scored a box I just eat it with butter and parmigiano, nothing else.   Locally, Eduardo's is pretty good. I've gotten their Alfabetini at Rainbow and used them in broth (when I've got the sniffles...)  . Bi-Rite just started carrying an awesome spaghetti called Pastificio that comes in a really cool package. The stuff is really nice, great tooth and texture to it."

Wait for it … Strong continues. "  But the best dried pasta ever. Ever. Is from La Gemma del Vesuvio in Naples. They're relatively new, and seem to have kind of a cult-following right now. They are looking to bring product into the states, so I'm keeping my fingers crossed. I was introduced to them by Faith Willinger when I was there a few months ago, and got to spend the day at their factory and an evening having dinner with the family. and I've never met people so truly dedicated to their craft. Angelo, the father who started it, has been running a gigantic machinery business for something like forty years, building super high-tech aircraft parts and whatnot, and he would fix broken pasta machinery from factories in Gragnano. He started to obsess over pasta, he built his own pasta factory, designed and built all of his own machines, and spent years perfecting his formulas before ever selling a single box. Seeing their operation was as awe-inspiring as eating their pasta."