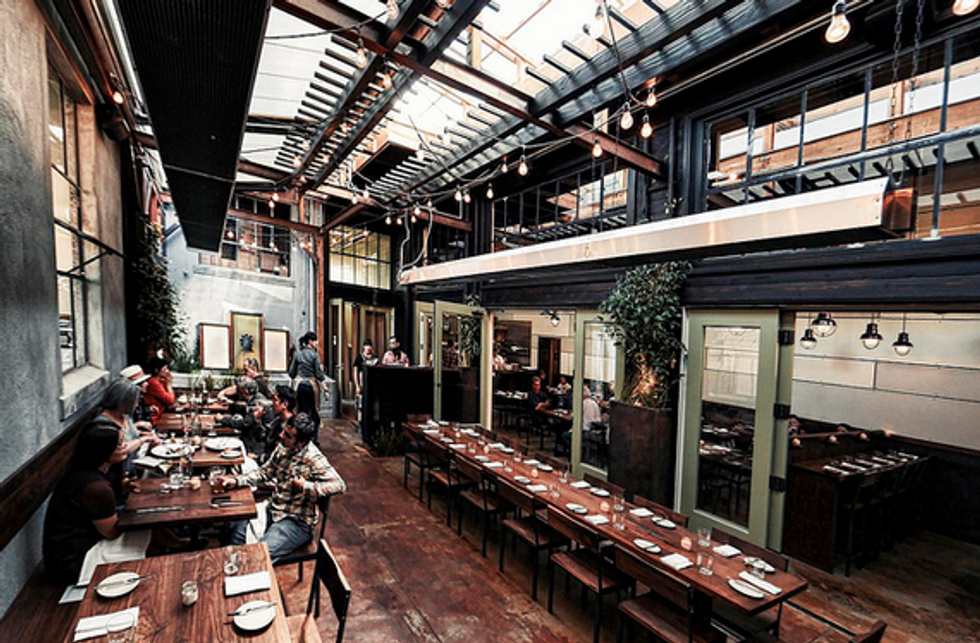 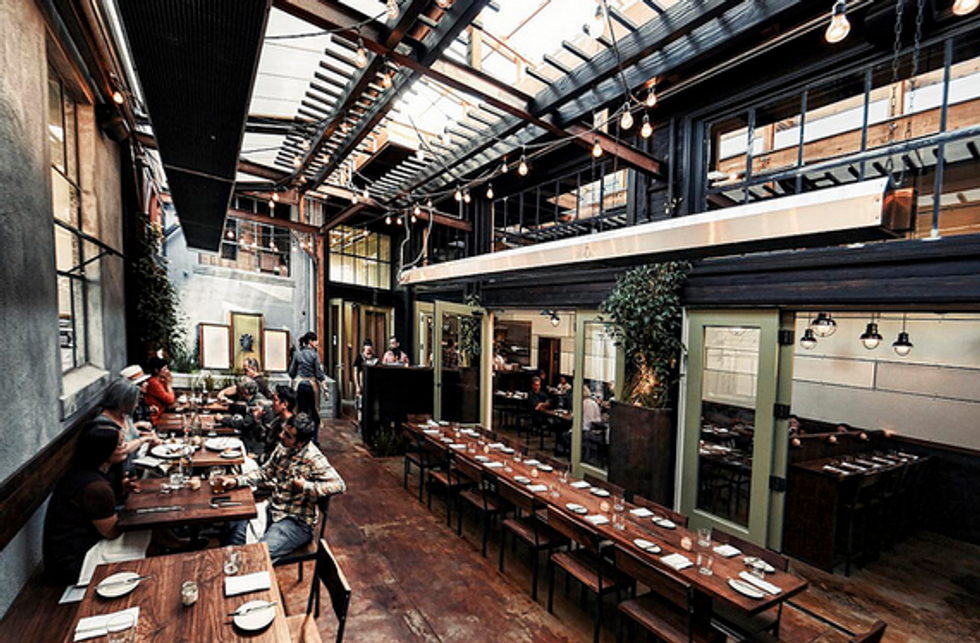 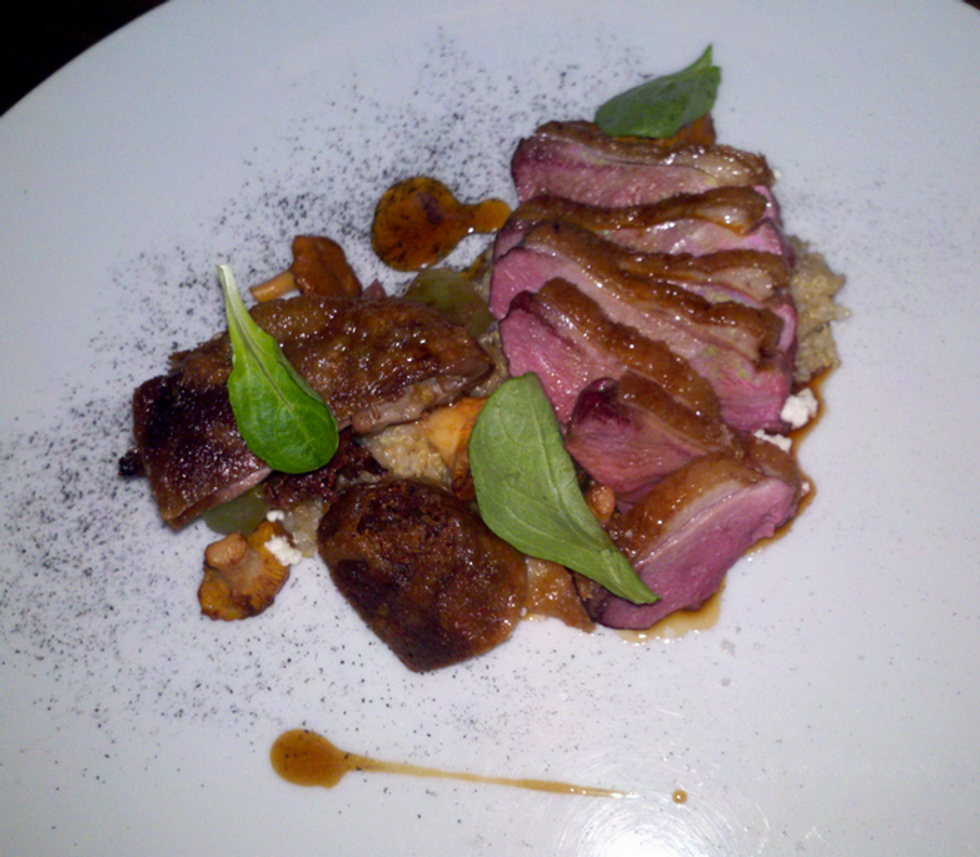 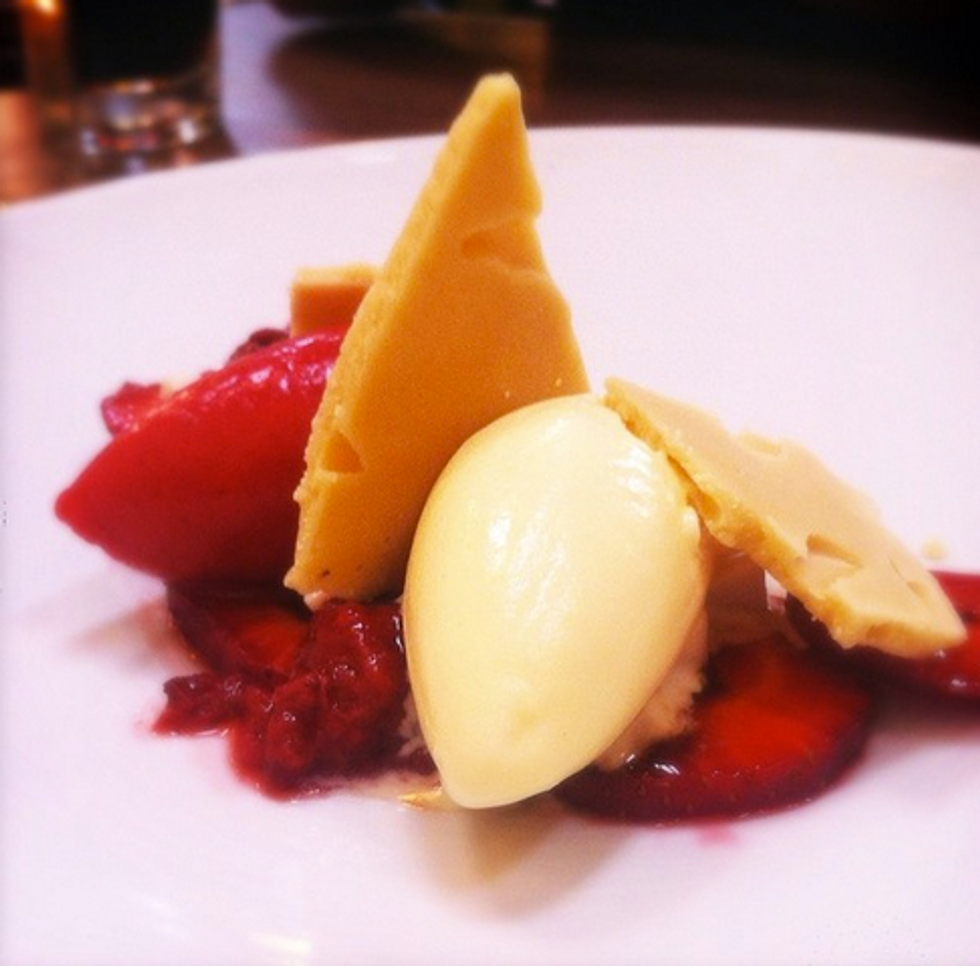 Central Kitchen is the new restaurant project in the Mission from the Flour + Water team. As you probably know by now, Flour + Water has an amazing reputation for its Mugnaini-fired pizzas, and heavenly pasta. Though Central Kitchen boldly eschews both items from its menu, the team's sophomore effort has come with its fair share of hype and expectations. Now, two months in, the nightly results on OpenTable usually turn up a discouraging number of 5 p.m. and 9:30 p.m. tables. It's probably easier to score a seat by just walking in.

When I went in to see how things were going last Thursday night, the restaurant's decor immediately hit me with its effortless cool. Servers and everyone in the kitchen wear the same thing: neatly fitted khaki aprons that look like they were designed by J. Crew. Outdoor lights hang romantically from strings slung overhead, and the connection is delightfully blurred between the interior seating and the outdoor courtyard's trickling water feature and Paxton Gate plant life. Obviously the place was packed with trendy, good-looking, upwardly mobile folks—many of them looking like they'd just graduated from the hipster class.

We nestled into a spot at the "bar," which overooks the entire dining area, and is strategically placed for an eye-to-eye view of the open kitchen across the room. I was impressed that the restaurant was going full tilt (no one really gets the luxury of a "soft-launch" these days), while Flour + Water hums away down the street, and the adjacent upscale one-month-old deli, Salumeria, continues to define itself at a young age. Executive chef Thomas McNaughton—who oversees all three operations—isn't sleeping a ton these days.

A few weeks ago he told me about his vision to re-define the Northern Californian cuisine of now—something he feels hasn't really been done since Alice Waters steered our region's chefs to let their figs and tomatoes speak for themselves.

McNaughton has set out with his chef de cuisine, Manresa alum Michael Gaines, to put together something different. Our server told us the salad of ham, Cabot cheddar, torn marinated bread and greens has been a hit for the past few weeks. The sharp cheese strikes a nostalgic chord, while a toss of herbs and foraged Miner's lettuce makes the plate feel fancy and adult. They should call it what is: a deconstructed sandwich.

Another highlight was the roasted confit hen, intermingled with crispy potatoes atop bright kale-green dabs of nettle puree. The hen is poached in butter before finished in the rotisserie, giving it an unparalleled succulence. I don't often gravitiate towards chicken on a menu, but here, it's a shoo-in for best entree.

On the way out, I noticed a pile of playlists on the host stand, detailing the songs on loop in the dining room: Toots and the Maytals, Otis Redding, and Tanlines are popping to memory. It reminded me that so many things go into making a modern dining experience transcendent: intelligent service, a feeling of being transported, great wine, cool uniforms, and a sleek lineup of tunes certainly don't hurt. Now that we know the produce can speak for itself, Northern California is letting all these other elements chime in. After eating at Central Kitchen, I still can't tell you precisely what defines the new cuisine of the Bay Area, but I'm sensing a very good definition is in the works.