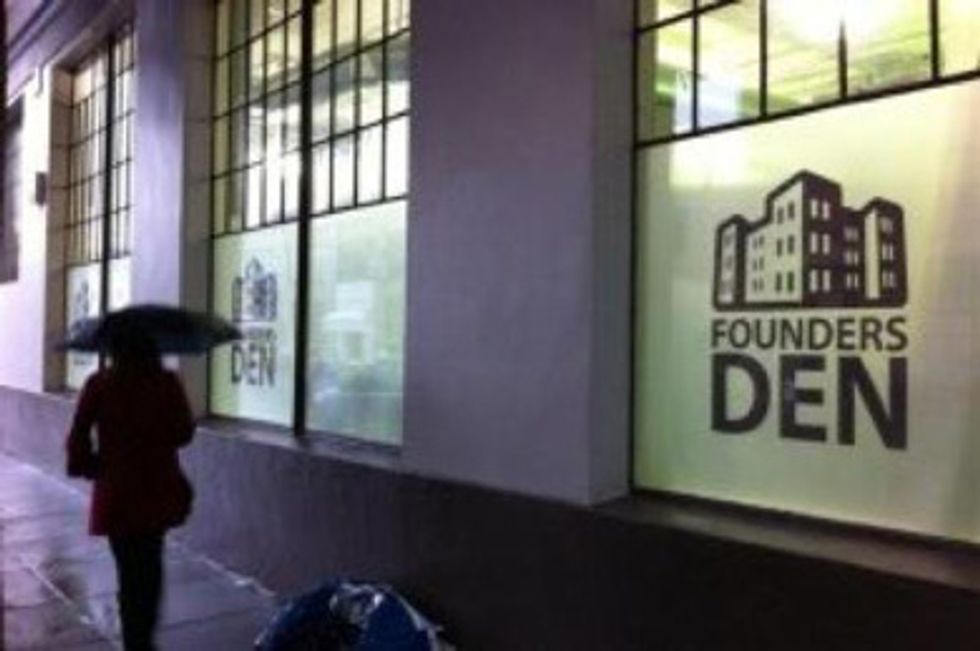 Clustered around South Park in Soma are hundreds of companies in the forefront of the city's latest tech boom, occupying blocks where disruptive innovation has been a way of life for decades.

Just a few doors down from the old 70s Rolling Stone office on Third Street, for example — and across the street from where HotWiredaka Wired Digital operated in the 90s — sits the Founders Den, a shared office space and private club for serial entrepreneurs.

Co-founder Jason Johnson, at 40 himself a serial entrepreneur with four startups in his past, had left his job at Dolby Labs in spring 2010 and was working out of his home on Potrero Hill, when he realized he missed the comraderie of hanging out with his former colleagues and geeks. So he sent out an email inquiring to a bunch of them whether anyone would like to share some office space with him downtown.

The response was positive and immediate, and three of them became his co-partners in launching Founders Den this past January. The well-designed space does not serve as an incubator, or a mentoring lab, but as a co-working environment for those companies with seed funding but not yet ready to get their Series A round of funding.

Typically, for experienced entrepreneurs, this means going from two or three people and $1-2K to a larger team and $1-2 million in backing. According to Johnson, this is a process that usually takes about six months.

Thus, a company invited to share the space at the Founders Den — which is by invitation only — is given a six months lease, after which they will be expected to clear out and make room for the next hopeful startup to take its place.

Of the current 22 resident companies (which comes to roughly 50 people, including celebrity entrepreneur Gavin Newsom), most are reaching the end of their lease and will be exiting the Den this summer. Johnson predicts that around 50 percent of them will succeed in raising their next round of funding — which would be an astonishing rate of success.

"If you're an entrepreneur, there's probably no place in the world right now that you'd rather be than San Francisco," he told me during a tour of the Den this week. "It's bicycle-friendly, open to every kind of innovation, and has the kind of coffee shops that you can sit in for hours, using the free WiFi and not even order coffee, and the people working there will still make you feel welcome.

What makes the co-working space model like that at the Den so compelling during this particular boom is that the traditional overhead costs for startups have been radically reduced.

"Fifteen years ago in this neighborhood," notes Johnson, "if you wanted to start a company, you needed a lot of space to house your servers, your marketing team, and row after row of engineers. Today, everything is outsourced -- the servers to the cloud, marketing to 99 Designs, coders to China."

He believes that the co-working model is going to "shift the commercial real estate business in San Francisco and probably other cities as well."

Today's tenants at the Founders Den are typical of the current wave of startups — little clusters of two or three people (the largest is six) working side-by-side in a large open room lined by private office units for meetings, phone calls, or whiteboard strategy sessions.

There is also a large common space, where ouside experts on venture capital, law, accounting, UI design, and so on make periodic appearances — roughly one private event per week. One recent guest was FCC Chair Julius Genachowski.

Of course, while collegiality is nice, most startups also are working at least partially in stealth mode, as they attempt to differentiate themselves from potential competitors, so how does this work among 22 different ventures at the Den?

"When people ask to join, we have an interview process and part of what we have to determine is how to avoid have competing companies at the club at the same time," says Johnson.

The companies at the Den fall into several large buckets, including web-based and mobile apps, products that leverage social media and location-based services; and among the incoming group are likely to be more data-driven companies. "We want more companies that are geared to finding ways to leverage big data," Johnson notes.

Among the big trends in the startup world that Johnson has noticed during the first six months of the Den's operation is the relative place of angels vs. VCs in funding new ventures.

"It only takes about $250,000 for an experienced entrepreneur to get to profitablity nowadays," he says. "So one of the big questions now revolves around whether angels are able to provide enough capital that startups don't even need to raise a venture round any longer.

"That could be a big change in how this all works out."