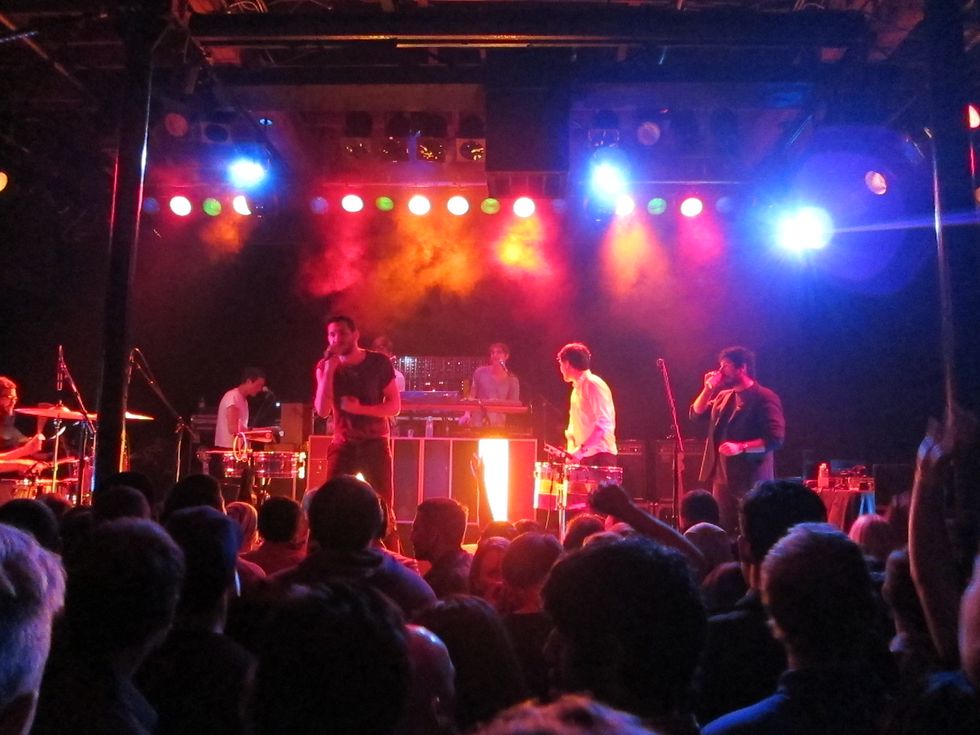 Holy Ghost! and Jessica 6 Sound Off at Slim's

There are few better endorsements in the world of electronica than an opening gig for LCD Soundsystem (obligatory “long live James Murphy” mention) and/or Aussie dance party heroes Cut Copy. Theirs is the word of godly dance saints, so it was written, or possibly decreed, probably rumored, until death do us part, amen, the father, the son, and—

So we should expect great things from New York City’s Holy Ghost!, benefactors of the ridiculous exposure that came from associating with those two bands on tours in the past two years. If Slim’s had a marquee, these precocious beat authors might have felt a strange sensation that their time is now, and then considered a laundry list of coming-of-age cliches to process the moment, upon seeing HOLY GHOST! TONIGHT in all caps.

Of course, it’s terribly unfair to compare them to said electro heavyweights, no matter how much cred they milked from their teats. Holy Ghost’s chief concern right now is moving bodies, which was very much the case on Thursday night. Their beats are reliably resonant but also fairly reliable in a less interesting way; for now, art takes a back seat to engineering some sonic fun.

So instead, they share a Venn diagram with acts such as Bag Raiders, Junior Boys and Chromeo, where synth explorations and clever percussion arrangements are paramount. Lead singer Alex Frankel proved himself a dexterous multi-instrumentalist, leap-frogging from keys to drums to guitar to on-stage banter, despite his claim that “this is my worst performance talking between songs.” All he had to say was we “kick Portland’s ass,” which he did, and all was forgiven. That’s how you pander.

Besides Frankel and drummer Nick Millhiser, it was a bit hard to tell what exactly was keeping the other four guys onstage busy. Two band members tinkered in front of a standing soundboard-and-synth contraption, a certifiable motherboard that must have James Murphy’s fingerprints all over it (Holy Ghost! is a pet project of his DFA label). We just hope that this six-piece was all real-time music-making, with little pre-embedded.

The single “Wait & See” was, predictably, the jam of the night. Its chorus sounds like something you’d hear on the Donnie Darko soundtrack, with a lamenting, spare key riff testing the limits of musical melodrama, and Frankel reminding a lover “well you promised to be honest with me.” But it was also a reminder of their limitations, that this is as good as it gets for this band, at least for right now. No, the comparison's not fair, but here we were missing those transcendent, sublime, anthemic moments that make LCD Soundsystem and Cut Copy's songs both embarrassingly fun and also shockingly meaningful. With time, we hope that will change.

March and dance on, Holy Ghost!

Then there was the matter of opener Jessica 6 and its curvy temptress of a lead singer, Nomi Ruiz. The band, part of the driving force behind Hercules and the Love Affair (the electro side project of Antony, of Antony and the Johnsons fame), seems to be looking for a place to live in the dance pop fringes. Ruiz is a stunning sight and an intriguing listen, with American Idol surface appeal but serious artistic ambitions. Her voice is polished and packaged with range and nuance, and for that reason sounded to me like someone who has studied Michael Jackson her whole life. When she came back onstage for Holy Ghost!’s encore, it was an all-eyes-on-her sort of moment.